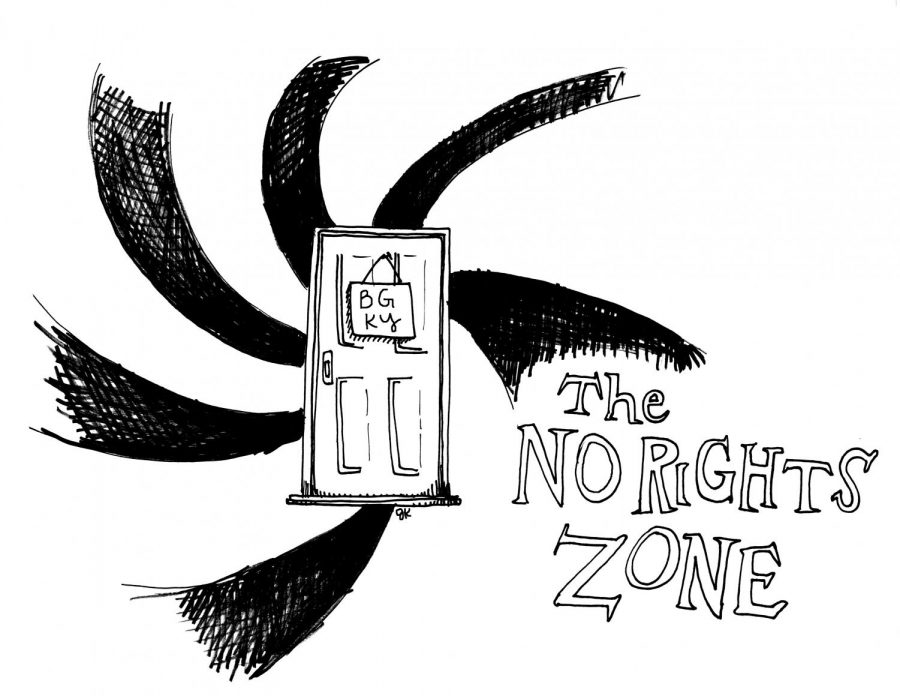 The Issue: Continued lobbying efforts have failed to move the current Bowling Green City Commission to pass a fairness ordinance.

Our Stance: Bowling Green seemingly takes pride in being the largest city in Kentucky without a fairness ordinance; an ordinance so painstakingly uncontroversial we’re left in shock at the commission’s inaction. Once again, it’s up to Bowling Green voters to go out to the polls to enact change.

In 2013, the Bowling Green Fairness Coalition began to push the city to adopt a fairness ordinance.

The trajectory is simple, get city government to pass the ordinance and ensure equal protection for the LGBT community in Bowling Green. One would think it’s common sense to make sure no one is discriminated against.

But what exactly is a fairness ordinance? That’s simple to explain. Patricia Minter, associate professor of history and member of Bowling Green Fairness, told a Herald reporter in February the ordinance proposed by the campaign “would add sexual orientation and gender identity as protected categories to existing civil rights laws.”

Due to the lack of legal protections, people can face discrimination in housing, employment and other forms of public accommodation. Meaning if your boss finds out you’re bisexual, for example, and that doesn’t fly with them then they can legally fire you due to your sexual orientation.

In June of last year, Midway become the eighth city in the state to adopt the ordinance, the Herald-Leader reported. Midway joined ranks with Lexington, Louisville, Covington, Danville, Frankfort, Morehead and Vicco in Perry County.

Even Morehead, land of infamous county clerk and break-out star of “Breaking Amish” Kim Davis, has a local fairness ordinance. Davis gained international attention when she was jailed for refusing to issue marriage licenses to gay couples following the Supreme Court’s ruling in Obergefell v. Hodges.

A score so dismal even the most tenured of professors would be both disgusted and impressed someone could pull off such a score.

The equality index assigned points for providing protections and services based on both sexual orientation and gender identity. Bowling Green received zero out of an available 30 points for Non-Discrimination Laws.

Currently Kentucky does not have a statewide fairness law, so it’s up to local governments to pass fairness ordinances, meaning it’s once again up to our city commission and mayor to wade through this.

We just so happen to be having an election for both of those positions on Tuesday, Nov. 8.

So where do candidates stand on the issue of making sure people of different sexual orientations and gender identities are given equal protection? Well, the results aren’t all that shocking.

At the recent “Debate in the District” candidates voiced their stances. Don Langley, write-in candidate for mayor, supports a fairness ordinances and would vote on it within his first 90 days in office. Mayor Bruce Wilkerson, seeking re-election, said in 2013 the issue would be best addressed on a state level, according to the Daily News. Since then he’s pushed passage on the ordinance more into the hands of city commissioners.

Of the 11 out of 12 candidates at the forum, only five said they supported passing the ordinance. These included: Ryan Fulkerson, Andrew Manley, Jennifer Morlan, Nathan Morguelan and Brian ‘Slim’ Nash.

Joe Denning, the candidate who didn’t attend the debate said in an interview with WBKO he believes there are already laws in Kentucky that would protect these groups from discrimination.

Yet, the Kentucky Senate approved Senate Bill 180 this past legislative session, which would “prohibit the government from compelling services or actions from anyone if doing so conflicted with their sincerely held religious beliefs,” according to the Herald-Leader. Critics of the bill called it a “license to discriminate.”

Kentucky isn’t trying to move forward with fairness; we’re actually actively taking several steps back. At this point in time it’s more likely to get a local fairness ordinance passed than a statewide one.

The issue of passing a fairness ordinance has continually come up at city commission debates. This is likely because a majority of Kentuckians support such an ordinance. A 2011 survey by The Schapiro Group found that 60 percent of Kentuckians agree that LGBT folks should “be protected from anti-gay and gender identity workplace discrimination.” 23 percent strongly agreed, 8 percent disagreed and 3 percent strongly disagreed.

Yet, some city commission candidates still don’t see the need for the ordinance. For example, incumbent Commissioner Sue Parrigin said at a debate in early October she thinks the fairness ordinance should be addressed on a state or federal level and that it “will not change hearts and minds,” the Daily News reported.

Yet in the midst of all that, Parrigin still said she was for equal treatment. Are LGBT people being extended the same protections as heterosexuals not considered “equal treatment?” It’s a mystery as to what Parrigin even means.

According to the Voter Guide published by Kentuckians for the Commonwealth, a large number of candidates did not respond to question if they would vote to adopt a fairness ordinance. And then there was Dan Rudloff, who responded so frequently with his belief that “public hearings needed” we wonder if he’s listening to the public at all.