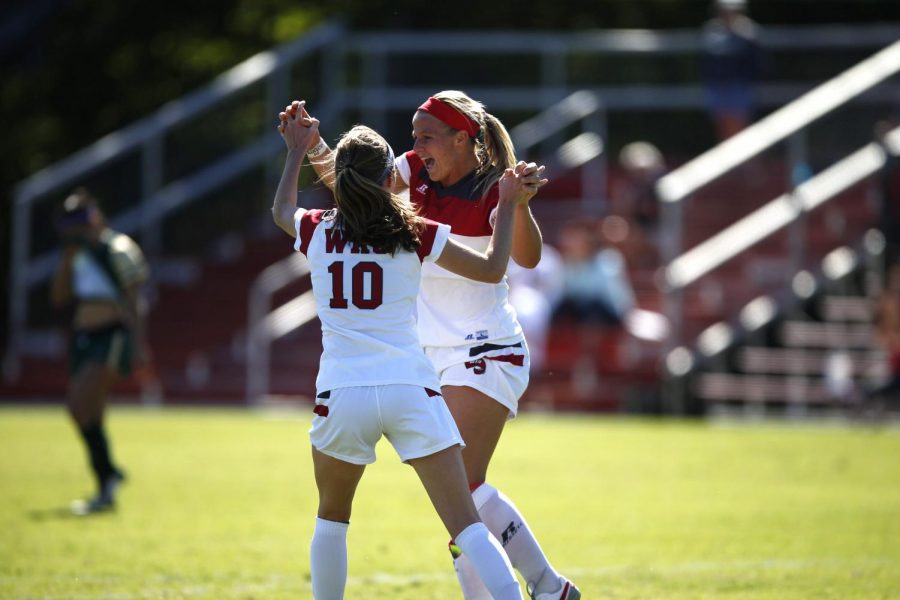 The WKU women’s soccer team returns to Conference USA action as it will take on the University of Texas at San Antonio at the WKU Soccer Complex, beginning at 7 p.m.

The Lady Toppers (11-5-0 overall, 6-2-0 C-USA) are coming off a split weekend after falling to Florida Atlantic University, 1-0 on Friday evening and grabbing a 1-0 victory over Florida International University on Sunday to close out their final road swing of the season.

With Sunday’s win over the Panthers, WKU clinched a spot in next month’s C-USA Tournament, which takes place in Charlotte, North Carolina.

“It’s an exciting process,” Head Coach Jason Neidell said. “We had the goal set for the season that we wanted to clinch a postseason spot early and play for the C-USA championship. We’re right where we thought we could be.”

Not only did the victory secure that place, but it also pushed the Lady Tops back on top of the league standings. Although Neidell’s club was picked to finish eighth in the Preseason C-USA Poll, he says he knew what they were capable of.

“I had total confidence that we’d be able to do what we’ve been doing,” Neidell stated. “Back in the preseason, I picked this team to win it. I knew we could be where we are now and now we’re sitting there.”

The Roadrunners (7-9-0, 3-4-0 C-USA) enter Bowling Green following a 2-1 road win at the University of Alabama at Birmingham last Sunday. In the victory, two different players found the back of the net and although UAB outshot UTSA, 16-12, the club still had enough to put a check in the win column.

UTSA, who is currently in eighth place in the C-USA standings, is paced by junior forward Kaja Skare.

On the year, Skare has scored seven goals for 16 total points on 31 shots. With that success, the junior also holds a .226 shot percentage and has been the offensive leader for her group.

On the defensive side of the ball, sophomore goalkeeper Michelle Cole leads the Roadrunners. The experienced net defender has saved 26 shots so far on the season and holds a save percentage of .553 in 737:43 minutes played.

“They’re very good,” Neidell said in regards  to UTSA. “They’re scrappy. I think they have scored the most goals this season in the conference, but have also given up the most goals. They are the only team that has scored on North Texas this year and that’s big.”

Backes, a Carmel, Indiana, native, has scored 10 goals so far on the season, which ranks her first in all of C-USA. On top of that, the versatile player is second among all Division I freshmen in that category, trailing the University of South Florida’s Evelyne Viens by one score.

On the defensive side of things, junior goalkeeper Allison Leone does the net protecting for the Lady Tops. Leone has made 49 saves for a save percentage of .845 in 1357:40 minutes played. Her high save number ranks her first in the league in that category.

Following Thursday’s meeting with Texas-San Antonio, WKU will have a week off before hosting Old Dominion University on Friday, Oct. 28, for a 7 p.m. contest.