Lady Tops find a way to win against UTSA 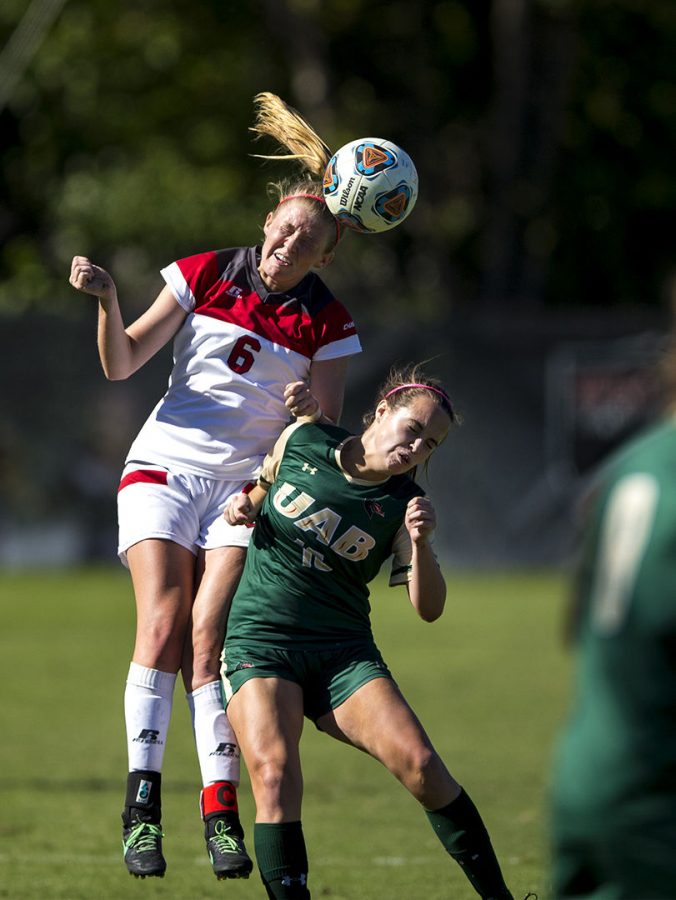 After an uncharacteristic night for a college soccer match, the WKU women’s soccer team overcame many obstacles and found a way to post a 2-0 win against the University of Texas at San Antonio last Thursday night.

Thursday’s match, which was originally scheduled to take place at the WKU Soccer Complex, was moved to Warren Central High School in Bowling Green as there was a power outage at the facility. Not only was the lighting a problem, but the weather wasn’t the best as it was rainy and windy.

“Well, we talked about staying focused,” Head Coach Jason Neidell said following the conclusion of the match at Joe Hood Field. “Obviously, I think the conditions were a little bit tough. We had to change our game plan a little bit –– a big part of our adjustment was UTSA.”

The Roadrunners battled until the end with the Lady Toppers (12-5-0 overall, 7-2-0 Conference USA) as both sides participated in a scoreless draw over the first 87 minutes.

“I think they’re a really good team,” Neidell said of UTSA. “I feel like they’re one of the better teams we’ve played in the conference. They were athletic, they knocked the ball around well and they gave us all we could handle.”

WKU maintained its hold atop the C-USA standings with the victory, which marked the club’s 10th shutout of the year.

The Lady Tops outshout the Roadrunners 12-7 on the evening including a 6-4 advantage in shots on goal. The unit was also awarded 13 corner kicks compared to UTSA’s two.

Junior goalkeeper Allison Leone earned her ninth solo shutout with four saves while playing in between the posts the entire 90 minutes.

Neither team was able to even record a shot on goal until the Roadrunners’ senior defender Alexis Alaniz did so in the 25th minute.

Alaniz challenged Leone with a shot from inside the box, but the junior saved it. Over the next eight minutes, the net protector saved two more from Alaniz and sophomore midfielder Olivia Nicholls to maintain the early deadlock.

The Lady Tops earned a pair of corner kicks late in the opening half with the help of sophomore midfielder Nicole Roseland, but the offense could not find the back of the net off the set pieces and the two sides went into the locker rooms knotted in a scoreless draw.

WKU tallied its first shots on goal on the evening when Dunn and junior midfielder Hannah Chua pressured the goalkeeper Weisse early in the second half. Both attempts were saved and the contest continued to be scoreless.

The Lady Tops finally found a breakthrough at the 87:09 mark of the match, as Gorham netted her third goal of the season off a corner kick.

Played in by senior defender Dee Dee Green, the ball rolled around the box and before the Roadrunners were able to clear it out, the redshirt sophomore found enough space in the lower right corner to bury her shot.

“We had a lot of corners, so I thought we were bound to finish on one,” Gorham stated on her goal. “One of our goals is finishing on set pieces, so finally someone got a foot on it and we were able to score.”

Less than a minute later, Dunn found the back of net to give the Lady Tops the two-goal lead.

Sophomore forward Hannah Cady had the ball and found the senior streaking up the field and connected with Dunn on a long pass.

The senior, setup with a one-on-one breakaway opportunity, made the most of it and sent a shot past the goalkeeper into the left corner to seal the 2-0 win for WKU.

“It feels great to have gotten the win again,” Dunn noted. “Hannah Cady chased down the ball and was able to cross it and I was there waiting for it.”

It came down to the wire, but the Lady Tops, like they have done throughout the course of the season, were able to find a way to win.

“That’s what we’ve been talking about; good teams find a way to win,” Neidell added. “I think tonight [Thursday], we just found a way to win. I turned to my assistants with eight minutes left and I said, ‘I know there’s a goal in this game in regulation and I hope it’s ours.’ It was just a hard fought game.”

WKU will close out its regular-season with a meeting with Old Dominion University on Friday at the WKU Soccer Complex. The match is scheduled to kickoff at 6 p.m.