How Joel Iyiegbuniwe is making an impact in a breakout season 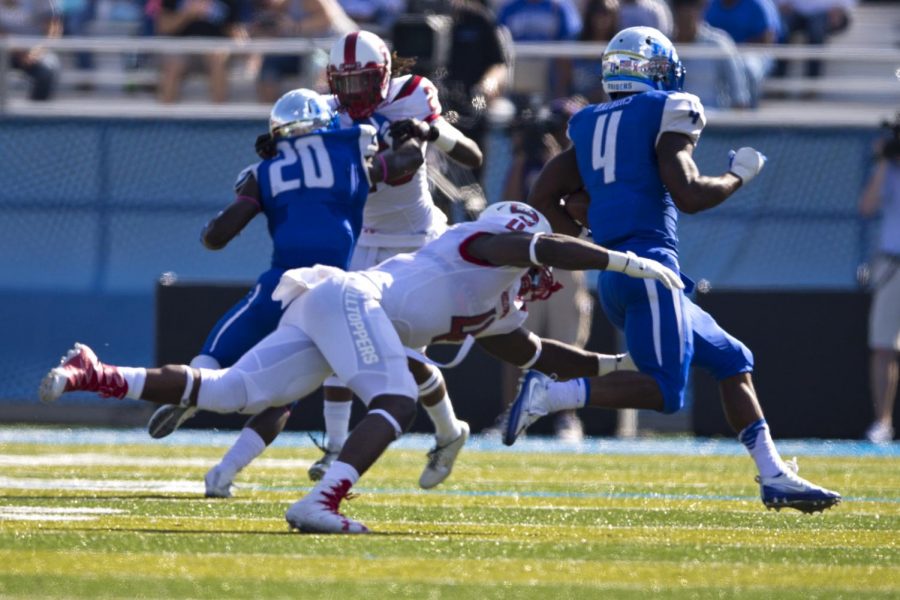 A little over four years ago, redshirt sophomore linebacker Joel Iyiegbuniwe was playing for a South Warren High School football team that was heading into its third season of existence.

He did not fill out his 6-foot-2-inch frame with the 225 pounds that he now has, and he also did not necessarily have expectations of playing football at his hometown school.

Now, the redshirt sophomore linebacker is arguably the most important player on a WKU defense looking to improve every week.

“I started to think that if I wanted to go to the next level, it may not necessarily be at Western, but playing at the next level I knew I definitely could,” Iyiegbuniwe said.

As the team’s starting outside linebacker and fourth-leading tackler, Iyiegbuniwe has burst onto the scene this season after playing as a reserve linebacker for the Hilltoppers a season ago.

After seeing time in all 14 games last season on special teams and sparingly on defense, Iyiegbuniwe took it upon himself to improve in the offseason and come back as a difference maker this season.

“It was my goal, definitely,” Iyiegbuniwe said. “I worked my tail off in the offseason, spring and fall camp. Seeing those things payoff is pretty cool.”

“Iggy,” as his teammates call him, wasn’t the only one who felt that a big step forward was possible for himself.

“I always knew Iggy had it,” redshirt junior linebacker T.J. McCollum said. “He’s got the size, he’s got the athletic ability; he’s fast. I knew all he needed to do was just learn the defense. This year he came in and really learned the defense to where now he can play any spot he wants to. He’s that guy that’s going to be one of the big-time players in the future.”

No one bats an eye anymore when Iggy has 10 tackles against the No. 1 team in the nation like he did at the University of Alabama in the second week of the season, but his path to earning a starting role wasn’t the most direct.

Iyiegbuniwe didn’t start playing football until he was in seventh grade, and while he was rated as the 12th best prospect in Kentucky by 247Sports.com, he only had two other official offers coming out of high school.

After having his senior season at South Warren cut short, Iggy began to settle in at WKU during his freshman season in 2014, playing in the first three games before suffering a season-ending knee injury.

He was granted a medical redshirt and had to watch from the sidelines as another football season was essentially lost.

“It was tough because the previous year, my senior year of high school, I was out too for a staph infection so when that hit me a year later it was like, ‘Wow,’” Iyiegbuniwe said. “I just had support from my family and prayed to God. That kind of got me through it.”

McCollum knows what it’s like to be a hometown kid as well. After spending two years at the University of Alabama at Birmingham, McCollum transferred to WKU in 2015 when UAB’s football program was cancelled.

“When you’re a hometown kid, you’re family,” McCollum said. “I think it’s big for him playing in front of his home crowd. Basically, he knows everybody that’s here –– everybody knows Iggy. That just gives you an extra edge and energy to play even better.”

As a starter and leading playmaker on defense, Iggy’s role has changed from a rotation player looking to earn reps on special teams to the role model and leader for younger players that he once sought.

“It’s really great to learn under him and watch him,” sophomore linebacker Ben Holt said. “It’s great to watch him progress also. He’s a great leader on defense, especially for the younger linebackers.”

Iyiegbuniwe’s impact on the field is unquestioned –– even if he isn’t the most vocal leader.

“He leads by example,” McCollum said. “He doesn’t say much and when people talk trash to him, he just looks at them and says, ‘Ok I’ll just show you on the field,’ because that’s what he does. The thing that he’s better at than everybody on the field is getting to the ball … Coach [Nick] Holt always says that he runs like a gazelle. He can play defensive end, SAM linebacker, outside linebacker, inside linebacker –– he could even play safety if he wanted to.”

Despite taking a quieter leadership approach on the field, McCollum calls Iyiegbuniwe a “joking guy” around the locker room.

Just because Iyiegbuniwe’s teammates recognize him as a major piece and leader of the team doesn’t mean that they’ve gained an understanding for a fundamental aspect of his identity: his last name.

“Most can pronounce it,” Iyiegbuniwe said. “There’s probably only one or two that can actually spell it. But they’re getting better. Saying it is half of it. Once you can say it, spelling is the next step.”

Holt is not one of the select few who has mastered the spelling.

While McCollum can’t spell it either, he definitely knows how to say it and is waiting for the day that all of Smith Stadium knows how to pronounce his fellow linebacker’s name too.

“I cannot spell his last name,” McCollum said. “I can only say it right now. I’m telling you they’re gonna do it one day though.”