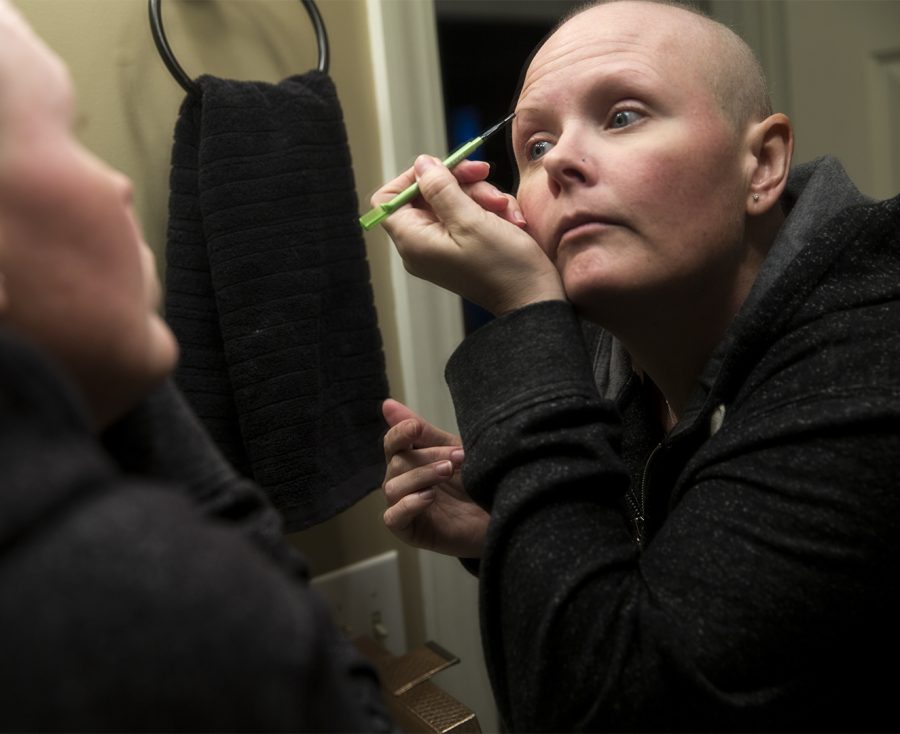 Coltrin fills in her eyebrows as part of her makeup routine before she goes to work. "I'm just trying to look less sick, less like a cancer patient," Coltrin said.

Before October 2015, Nicole Coltrin felt unstoppable. As a single mother, she was responsible for caring for her 12-year-old son, Memphis Coltrin, while working full time. In the middle of October, however, Nicole Coltrin noticed a change in her workout routine causing her to question her health.

“I stopped being able to run five miles and lift weights,” she said. “Then the back pain started. After that, we found the lump.”

Even though her family had no history of breast cancer, Nicole Coltrin decided to schedule a mammogram just in case.

On Nov. 5, 2015, she was diagnosed with invasive ductal carcinoma, stage three breast cancer, at age 36.

Determined to beat the cancer, Nicole Coltrin’s first concern was not for herself.

“From the moment you’re diagnosed, you never think about what is going to happen to you, but your child,” Coltrin said. “How do you respond to ‘Mom, are you going to die?’”

Nicole Coltrin did her best to maintain the lifestyle she had before the diagnosis, but after getting a single mastectomy on Nov. 18, 2015, she finally had to take time off from work and exercise to allow her body to recover.

She could not take time off from being a mother, though. Despite the pain of surgery, Nicole Coltrin tried her best to comfort her son’s own anxiety concerning her illness.

“Memphis always worried about me to the point that he didn’t want to leave my side or even go to school,” she said.

Waiting to begin chemotherapy wasn’t easy, either; Nicole Coltrin said she was in a hurry to to start the treatment as soon as possible.

“I felt like I had to get the poison out of my body,” she said.

Coltrin finally began her first round of chemotherapy mid-December. The treatments lasted four to six hours each, not including time spent doing blood work or doctor consultations. Coltrin was the youngest recipient of treatment in the room, and took the most aggressive form of treatment: Adriamycin and Cytoxan, also called “the red devil.”

“You could see the poison in my eyes,” Coltrin said.

After the treatments, Coltrin would sleep for days.

“I only got out of bed sometimes because of [Memphis], even after chemo treatments or radiation because that’s what mothers do,” she said. “Cancer doesn’t stop motherhood, it makes you see how important it is.”

During this time, Nicole Coltrin made the decision to take off work due to her level of physical pain. Though she was able to take a break from work, she was still responsible for being a mother.

“You cannot be the mom you want to be because you are fighting for your life,” Nicole Coltrin said. “You feel like you have to make every moment count, but at the same time, you are too sick to move.”

On top of dealing with the stress of her illness, Nicole Coltrin encountered another problem when she lost her job of six years due to her leave of absence during chemotherapy, causing the financial stress of cancer and its treatment to take its toll.

“Fighting cancer was easier than the financial aftermath,” she said.

When her credit card debt continued to increase, Nicole Coltrin sought help from charities, but their funds had been exhausted. Her boyfriend stepped in to cover her cell phone bill, car insurance and car payments.

“Without him, I would have lost everything,” Nicole Coltrin said.

In April 2016, two weeks after her last chemotherapy treatment, Nicole Coltrin began radiation treatment and decided to start a new job as well.

“Working during hard times like radiation helped to keep my mind off of the pain,” she said.

After finishing radiation and multiple surgeries, Nicole Coltrin is now in remission. However her journey is not over; she will have three surgeries in the next year. Some of cancer’s effects will last longer than the cancer itself, she said.

“I will never be who I once was,” she said. “I have a constant fear of recurrence, but now I have learned even if it comes back and spreads or metastasizes I can live.”

Now, Nicole Coltrin spends her time with her son, her boyfriend and her new dog Cooper. She works full time and exercises almost daily.

“If cancer has taught me anything, it’s to live for the moment, to go after love, and make that bucket list a reality,” she said. “If I beat stage three breast cancer, I can do anything in this world.”