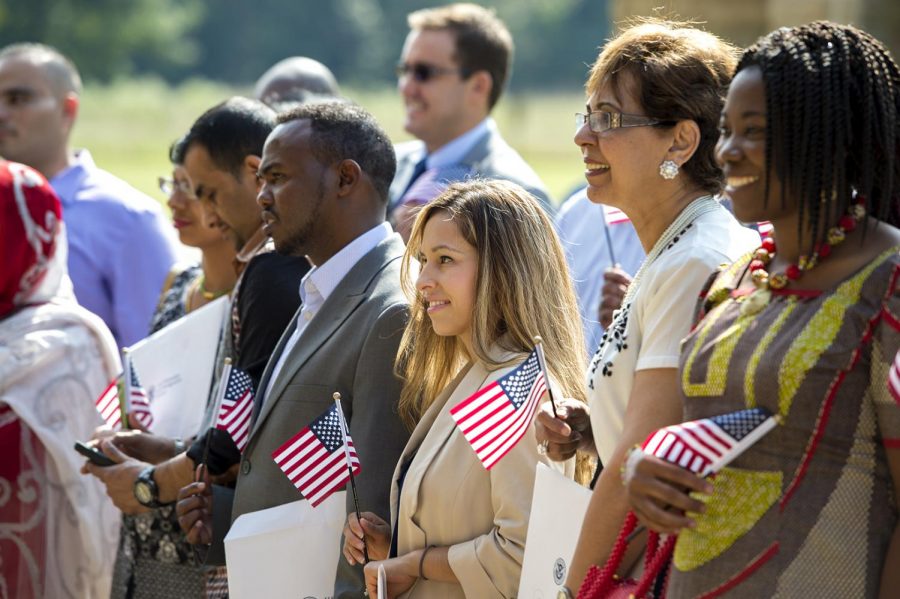 Julia Rivas, program support specialist for the Center for Citizenship and Social Justice, became an American citizen Friday morning when she swore her loyalty in the Oath of Allegiance at Mammoth Cave National Park.

Rivas relocated from El Salvador to New Jersey at age 13 with her parents and older brother. Her dad was a successful business owner in El Salvador, making his family a target for criminals in search of money.

“They would say, ‘I know where your kids go to school. If you don’t give us money, we will kidnap them,’” Rivas said. “We moved for safety reasons, but overall it was for a better future.”

Rivas said moving to New Jersey caused a big cultural shock. Neither she nor her family spoke any English, and adjusting to the new school system was challenging. However, she said the most difficult part of the move for her and her brother was leaving the rest of their family behind.

“We left everything,” she said. “Our family is large, and we were always very close.”

Rivas used her passion for music to help her adjust to the new culture; learning dances from different countries became a hobby. To overcome the language barrier, her dad put her in an English academy, where she would go for three hours after school five days a week.

“Another thing people don’t realize is that kids from immigrant families have to help at home a lot,” she said, explaining that she had to help her parents with doctor’s appointments and talking to insurance companies.

“It’s hard because you’re forced to be an adult,” she said. “I remember that it was very stressful. But now that I look back, I appreciate that experience. It has definitely made me a stronger woman.”

After living in New Jersey for five years, Rivas and her family moved to Bowling Green during her junior year of high school, once again for safety reasons. She said the move to Kentucky from a large, culturally diverse city was another huge adjustment.

“Here [in Bowling Green], it was very different,” she said. “It was a learning experience.”

Rivas’ father had always been an advocate for education, and embedded this sentiment in his daughter.

Since she wasn’t an American citizen, Rivas couldn’t apply for student loans or Federal Student Aid. Her brother and father helped her pay for her first year of college, after which she worked tirelessly to find scholarships to pay for her education. By doing so, she was able to graduate in 2013 without any debt.

“College changed my life,” she said, adding that her experience inspired her to continue working with students and advocating for the importance of education.

After her graduation with a bachelor’s degree in interdisciplinary studies, Rivas worked at a public high school as an English as a second language teacher’s aide. She said she loved the opportunity it gave her to learn about refugees and immigrants in Bowling Green. She has also worked with the ALIVE Center and the Hispanic Organization for the Promotion of Education to encourage ESL students to pursue higher education. She will graduate in the spring with a master’s degree in student affairs.

Rivas is currently the program support specialist at the Center for Citizenship and Social Justice and coordinator for a new program launching in the spring called Scholars in Service, which will fund service-related student projects focused on social justice and civic engagement.

Rivas was able to begin the citizenship application process three years ago after her husband, also a naturalized citizen from El Salvador became a citizen. Although the process involved a lot of waiting, Rivas passed her citizenship test in August and was scheduled to receive her certificate at the ceremony on Friday.

Rivas has traveled back to El Salvador for the past three years with her husband and 4-year-old son, Matthew, with plans to travel again with her 5-month-old daughter, Juliet.

“It’s beautiful,” she said, adding later: “If my country were safer, we wouldn’t be here. I do miss it.”

Rivas uses the family trips to El Salvador to embrace her culture and give her children the chance to know their roots.

“I have pictures of Matthew playing in the dirt, playing with sticks,” Rivas said. “I’d rather give him experiences like that than give him expensive toys.”

Rivas brought her husband, daughter and parents with her to the ceremony. She said she wished her son could have gone, too, but she didn’t want to pull him out of school.

Mammoth Cave hosted the ceremony through its partnership with the United States Immigration and Naturalization Service. 33 applicants accepted citizenship on Friday, including immigrants from Uruguay, Thailand, Mexico, Egypt and Ghana.

Mammoth Cave acting superintendent Lizzie Watts said watching so many people swear their allegiance to America created a proud moment for her, reminding her why her country is so special.

“National parks belong to America,” Watts said. “It’s these treasures that belong to all Americans, and what better way and place to have people start their history as Americans than in a national park?”

After the ceremony, Rivas said she felt accomplished and was proud of her achievement. She said the first thing she wanted to do as a United States citizen was register to vote.

“It is a privilege to have a voice in democracy, so we should definitely take part in that,” she said. “It’s our right that all citizens have, so why not take advantage of it?”