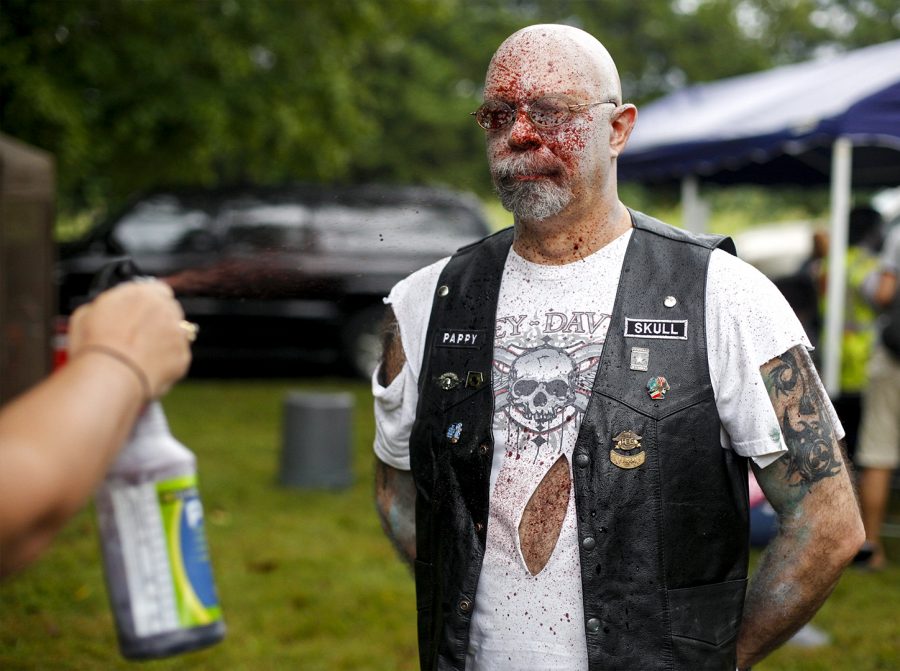 Fake blood is sprayed onto James Cadotte on the set of "Remnant 13," a zombie television show, on Saturday, Sept. 10 in Bowling Green.

Although Kentucky may not immediately come to mind when one considers ideal film set locations, Bowling Green native Shawn Lindsey began filming in his hometown on Saturday night for his developing zombie drama, “Remnant 13.”

Producer Shawn Lindsey said he stopped in Senoia, Georgia, three months ago with his family to visit the set of popular AMC drama “The Walking Dead,” and was inspired to take on a similar project.

“It’s kind of interesting the way they basically take a bustling city and turn it into a complete desolate wasteland,” Lindsey said. “So, I said, ‘you know what? I want to do the same thing.’”

Although “The Walking Dead” series begins in the post-apocalyptic world, Lindsey said “Remnant 13” will start from the beginning of the zombie outbreak.

“You’re actually going to see the outbreak happen, what caused it, and kind of follow the cast of characters from that point on and see how it happens,” Lindsey explained.

After Lindsey returned home, he began meeting with a screenwriter to work his vision into existence. He said the process has been time-consuming and stressful, though he has learned a lot alongside his team.

Lea Hutton Beasmore, production manager, said she began her film career three years ago through stand-in work in a film titled “Hope Bridge,” which inspired her interest in movie production. Since then, she created a network called Kentucky Films, a Facebook group created to spread the word of films and projects created in Kentucky.

Beasmore said Lindsey put his casting notice out on the page, which is when she began working with him on the project. Beasmore said she helps organize contracts and waiver and release forms; she also worked with Lindsey to host casting auditions.

The production is currently promoting its crowdfunding campaign, with a goal of raising $50,000. Lindsey said at this point, he’s looking for a lot of local support from Bowling Green.

While in Senoia, Lindsey said he talked to several businesses in the area, who told him about how the business community has grown since “The Walking Dead” came to their city.

“We think helping to bring this production to light will actually help the entire city of Bowling Green, and help bring tourism and things like that,” Lindsey said. “I think that would be great for many small businesses in this area to jump onboard and be a part of it.”

Sylvio Wolf Busch, one of the main actors, said he’s not a huge fan of horror films, but the script for “Remnant 13” stood out to him.

“It was a little different; it had a better narrative,” Busch said. “The other thing that sold me on it was the passion of the creator, with Shawn [Lindsey] kind of being the driving force behind it.”

In his online campaign summary, Lindsey said he wanted to create a project that gave young professionals the chance to build their resumes and career as well as increase their chance of success in the industry.

Brandon Smith, a 26-year-old theater student at WKU, was hired onto the production as the assistant director. He said he originally auditioned for an acting role, and when he wasn’t casted, he contacted Lindsey and Beasmore about working on the production crew.

“When I auditioned for this, I wanted to get something really dramatic and serious under my belt,” Smith said, explaining that most of his acting experience with theater had been in comedic roles. Smith is currently writing a series of his own, and said having experience as an assistant director behind the cameras has helped prepare him.

“It can get a little stressful, but it’s a labor of passion,” Smith said. “So you make time for it and enjoy it.”

Ed. note: A previous photo caption incorrectly spelled the name of Casey Tiefermann. This error has been corrected. The Herald regrets the error.