Hilltoppers come up in short in overtime against Vanderbilt 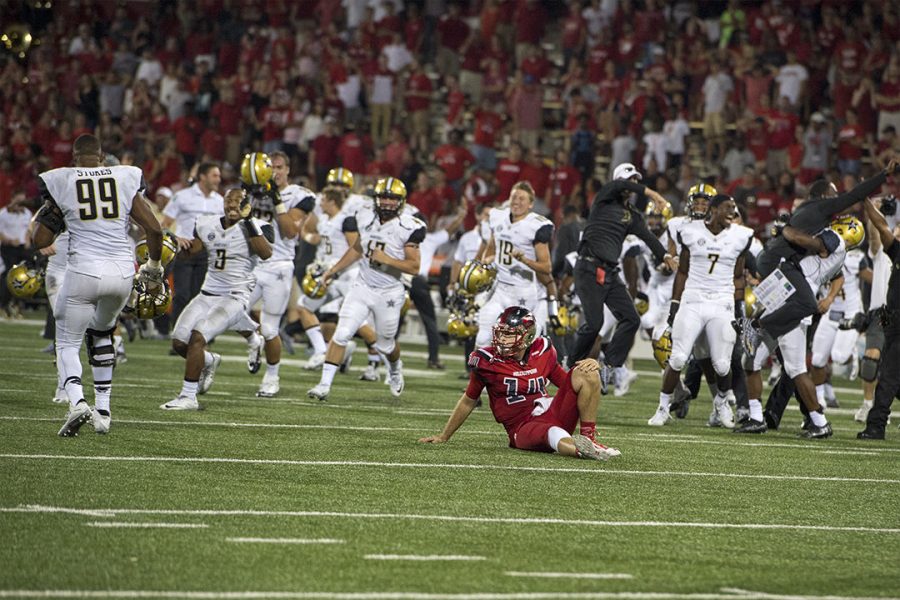 When WKU and Vanderbilt last met on opening night one season ago, the game was decided on the goal line as time expired.

Current junior defensive back Joe Brown stopped Vanderbilt’s Nathan Marcus short of the goal line, sealing a 14-12 victory for the Hilltoppers. Fast forward to Saturday and the situation remained the same, only with a mirrored outcome.

After the Commodores forced overtime with time expiring in regulation, WKU Head Coach Jeff Brohm faced a big decision: kick the extra point to tie the game and enter a second overtime, or go for the two-point conversion and the win.

He elected to go with the latter, and watched karma take over as redshirt junior quarterback Mike White’s pass deflected off of redshirt senior running back Ace Wales’ helmet giving Vanderbilt a 31-30 victory.

“I’m always aggressive but I just really felt once again… our defense was wearing down and it looked like they were going to be able to score at will at that point,” Brohm said. “Our defense had played great for three quarters and I thought we had a chance to win.”

It was anything but perfect from the start as the Hilltoppers and Commodores took the field to play in front of a record crowd of 23,674 people at L.T. Smith Stadium on Saturday.

WKU had three turnovers to Vanderbilt’s one, and accumulated 11 penalties for 88 yards.

“We lost the turnover battle and statistically that’s what happens—you lose the game,” Wales said. “We have to put more emphasis on protecting the ball… we just have to keep playing hard and put that game behind us.”

Brohm’s offense started out sharp with a 14-play, 75-yard touchdown drive on WKU’s first possession of the game.

White drove the Hilltoppers down to the Commodores’ 15-yard line where he handed off to wide receiver Nicholas Norris for an eleven-yard pickup on fourth down and one.

On the next play, White’s pass was deflected behind the line of scrimmage and a Vanderbilt defender picked the ball up and took it all the way back for a touchdown. The play was reviewed and overturned, and Wales punched it in on the next play for the Hilltoppers after earning the start at running back despite being listed as questionable all week long.

The early score would be the last one for a while, as the Hilltopper offense cooled off quickly in the scorching Bowling Green heat. The defense, however, was just starting to heat up.

After its first four drives, Vanderbilt had more punts than first downs. The chains weren’t moved forward for the Commodores until the 10:20 mark of the second quarter.

The Hilltoppers got into the Vandy backfield early and often, recording eight tackles for loss and a sack in the first half.

WKU also forced a Shurmur interception as junior defensive back Leverick Johnson picked off the Vandy quarterback at the Commodores’ 42-yard line toward the end of the first quarter.

Unfortunately for the Hilltoppers, Johnson’s interception wouldn’t matter as true freshman running back Quinton Baker fumbled the ball back to the defense on the very first play of the ensuing drive, and the defense wore down as the game progressed.

“We have to be able to finish games and come out there and have the same energy throughout the whole game,” graduate transfer linebacker Keith Brown said. “We had possession, we just have to finish and show that we have the motor to keep playing all four quarters.”

With a chance to capitalize the next time WKU regained possession at the start of the second quarter, Norris charged towards the end zone after hauling in a pass from White, but was stripped of the ball at the Vandy five-yard line, turning the ball back over to the Commodores.

“We had too many opportunities early in the game that cost us, and against good football teams you’re not going to win those and we didn’t,” Brohm said.

With the game heading toward a similar, 14-12 slugfest as it did a year ago, graduate transfer Tyler Ferguson entered the game at quarterback with less than nine minutes remaining in the first half, and ripped a 61-yard touchdown pass to junior wide out Nacarius Fant.

“We had a plan going into the game that [Tyler] was going to play a series in the second quarter,” Brohm said. “We were doing it regardless of the score and I thought he came in and performed well. It was good to get him experience.”

Still, the Commodores wouldn’t go away as Shurmur orchestrated a 77-yard drive that resulted in a Webb touchdown leaving just 2:16 on the clock for the Tops.

Vanderbilt received the kickoff to start the second half and picked up where it left off, marching 75 yards down the field handing off to Webb for his second touchdown on the day.

After a slow start for Webb, the SEC’s leading rusher started to figure out the defense, finishing with 95 yards and three touchdowns.

“He’s a little guy,” Brown said. “You can’t really see him behind a big SEC line. He’s an electric player. We just couldn’t keep him contained.”

White re-entered the game midway through the third quarter but couldn’t find much success. After Norris converted another fourth down in Vanderbilt territory, White’s pass was deflected and intercepted at the five-yard line.

With all the momentum seemingly shifting Vandy’s way and the defense slowly breaking down due to fatigue, sophomore defensive back Drell Greene found his way into the Commodore backfield and got a hand on the punt, setting WKU up at the opposing 16-yard line.

But the miscues continued for the Hilltoppers. Four plays after the interception, redshirt sophomore kicker Ryan Nuss pushed a 25-yard chip shot wide right, denying the Tops a chance to score.

After the fifth Vanderbilt three-and-out of the game, Wales gave some life to an offense thirsty for anything positive by scampering for a 20-yard touchdown, giving WKU a 21-14 lead with 11:33 left to play.

Wales played big after sitting out last week at Miami (OH). The senior finished with 157 yards and two touchdowns.

“I thought Ace ran outstanding,” Brohm said. “Ace sucked it up and played extremely well. He definitely helps our offense move the ball down the field.”

Six minutes of game time and one Vanderbilt field goal later, Wales carried the Tops on a clock-eating drive as he piled up 65 yards on the ground and set up a 25-yard redemption field goal for Nuss, putting the Tops up 24-17.

The field goal was enough to extend the lead, but not enough to take the Commodores totally out of the fight.

With 1:02 remaining in the game, Shurmur and company took the ball 75 yards down the field and tied the game with a leaping Webb diving across the line as time expired.

“I like our defense,” Brohm said. “I think we’ve got good football players and I think they love football, but was I disappointed to let them drive all the way down the field with one minute left and no timeouts? Yes, I really was against a team that can’t throw the ball.”

In overtime, Vanderbilt struck first as Shurmur hit wide out Nathan Marcus for a five-yard score, making the score 31-24.

“I’m always behind coach Brohm,” Williams said. “He’s a great coach and if he says he’ll go for it every time then that’s just his mentality. We all like that. Most of the time we’ve been successful when we go for it but tonight we came up short and that’s on us.”

This was the first time an SEC school had ever come to Bowling Green, and it was arguably the biggest non-conference home game in WKU history. Regardless of the outcome, Brohm said the opportunity was very positive.

“It’s great for us,” Brohm said. “Anytime we can play an SEC opponent, that’s how you measure yourself. We wanted to come in and fight, try to find a way to win and unfortunately we came up short. These are the games we want to schedule. This is what it’s all about. This is real football here, playing against a high-level in front of a great crowd.”

The Hilltoppers will look to rebound from up the big home loss next Saturday when Houston Baptist comes to town. Kickoff for that game is set at 6 p.m.