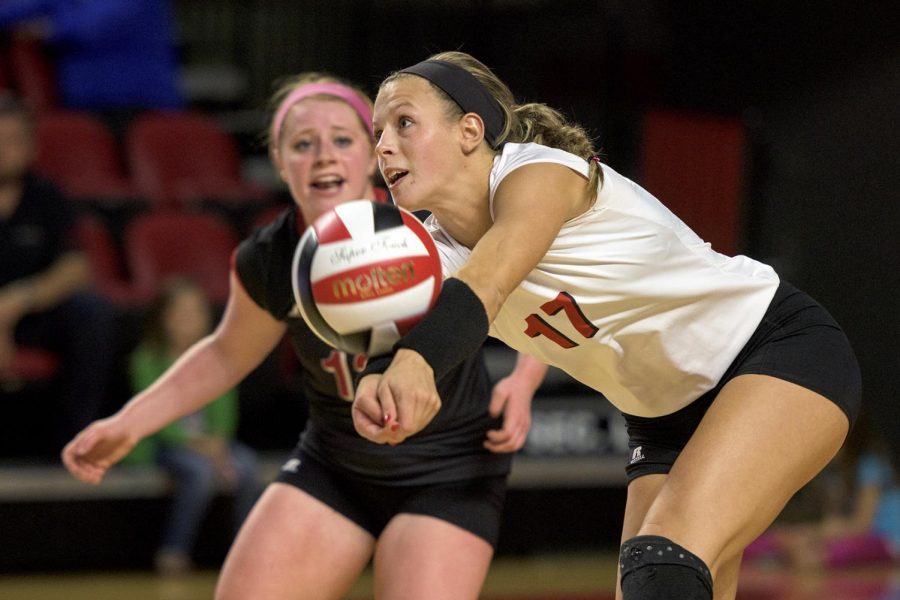 WKU's defensive specialist Kaelin Grimes (17) digs a ball to the setter during the Lady Toppers' 3-1 win over UTSA on Friday at Diddle Arena.

The nineteenth ranked WKU volleyball team (6-1) traveled to St. Louis this past weekend to take part in their second tournament of the season.

On the first day of the Marcia E. Hamilton Classic Cal Poly University took down the Hilltoppers as junior All-American setter Jessica Lucas did not play in the match.

Her absence played a big role in a drastically lower offensive hitting percentage than WKU typically produces. The Toppers hit just .218 in the match.

Despite not having the pre-season Conference USA player of the year (Lucas) on the court, sophomore setter Mary Martin got the start against the Mustangs and had a career performance.

Martin put up a double-double performance in her first start. She ended the the match with 48 assists to go along with 10 digs. Martin also added two blocks and two kills to her stat line.

The second day of the tournament was a different story for the Lady Toppers.

After hitting just .218 in the loss to Cal Poly the Lady Toppers put on a show with a .538 hitting percentage in the first set as they faced off against the host, St. Louis University.

WKU put up a tough fight on defense as they held the Billikens to .036 hitting in the first set of the match.

The Lady Toppers then swept St. Louis in straight sets with help from Lucas as she was back in action for the match.

Lucas put together her third double double of the season with 35 assists to go along with 11 digs and seven kills.

Cavanaugh ended the match with 13 kills and a .458 hitting clip. Anderson chipped in for nine kills and Engle for eight, respectively.

In the second match of the day, Travis Hudson and company beat Arkansas State University three sets to one.

Familiar faces led the way offensively for WKU as Anderson had 16 kills on 29 attacks. Cavanaugh put down 15 kills and sophomore Taylor Dellinger added 11. Engle also had a well-rounded performance with eight kills and 10 digs.

Next up on the schedule for the Lady Toppers is their first home game of the season. The Toppers will take on Belmont tonight in E.A. Diddle Arena at 7 p.m.

The Bruins are currently undefeated on the season with a 6-0 record which features wins against the University of Memphis and Georgia State University.

Belmont will be out for revenge as WKU took down the Bruins in three straight sets last year in Nashville. Lucas managed to record a double-double in the affair as she notched 35 assists and 13 digs.