WKU looks for toughness to carry over after Rice victory 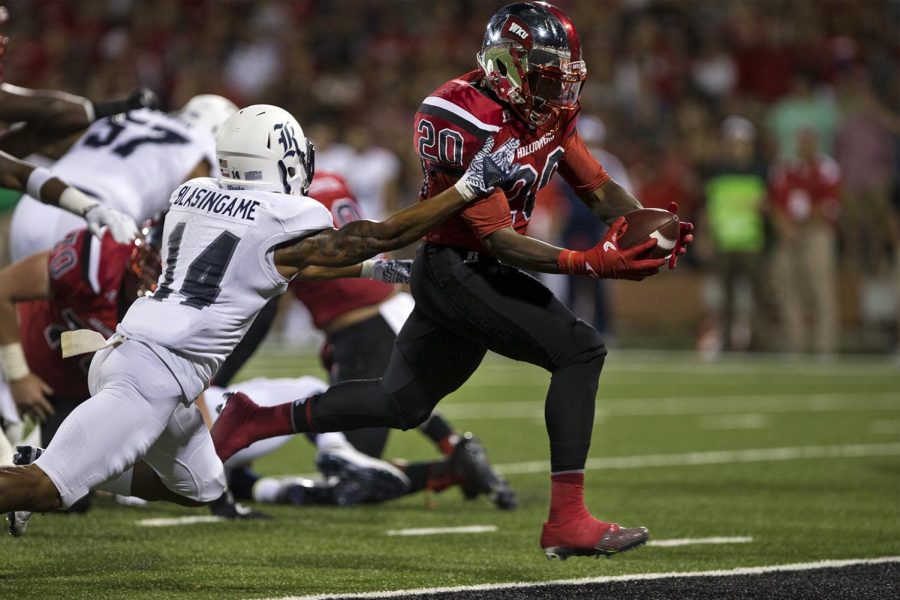 Senior running back Anthony Wales (20) runs into the endzone during WKU's 46-14 win against Rice on Thursday, Sept. 1, 2016 at L.T. Smith Stadium. Matt Lunsford/HERALD

The overarching question for Head Coach Jeff Brohm’s WKU football team after coming off of arguably the best season in program history in 2015 was centered around the idea of how his team would respond.

The Hilltoppers’ season-opening victory over Rice on Thursday night provided some of those answers — namely the one concerning the quarterback position.

“I thought he played outstanding,” Brohm said. “Any time you can make that many big plays and throw the ball all over the field that accurately, that’s a testament to the hard work he’s put in.”

The “he” Brohm is referring to is WKU’s new starting quarterback, junior Mike White, who has placed himself in elite company among WKU quarterbacks after just one game on the Hill.

“We had a tough competition between quarterbacks and we made him earn it,” Brohm said. “I think our o-line did a great job and he didn’t have to take too many hits, but he did stand in there a few times. The number one thing I challenged [White] on from the get-go was toughness.”

There have only been three 500-yard passing games in WKU history, White owns one of them after torching the Owls to the tune of 25-31 for 517 yards and three touchdowns.

“If I told you that I would be lying,” White said when asked if he expected to play the way he did. “I think it’s just a testament to the guys we have around me. It all starts up front with the big brothers of this offense, and then our receiving corps and running backs get the ball in space and take care of the rest.”

After a relatively slow start, White led the WKU offense on an 86-yard drive resulting in the first Topper touchdown of the year. The drive was sparked by a 45-yard strike from White to senior wideout Taywan Taylor on third down.

Senior tailback Ace Wales bookended the drive with a 5-yard score — the first of four straight touchdowns for WKU.

From that point on, it was an offensive clinic for White and company. The next drive didn’t take long, as senior wide receiver Nicholas Norris hauled in an 87-yard bomb making the score 16-0. Norris finished the game with 147 yards on seven catches with two touchdowns.

“I wouldn’t say it was [blown coverage],” Norris said. “We just had an extra chip on our shoulder because all summer we’ve been hearing that we can’t be the same team after losing a couple guys so we just wanted to show them that we can do the same things that we did last year.”

The Topper defense was preparing for Rice’s up-tempo offense all week long, and for a team that plays fast, the game started off slow for Rice.

After a quick three-and-out forced the Owls to punt, the long snap sailed over punter Jack Fox’s head and out of the back of the end zone, resulting a safety and an early 2-0 lead for WKU. The Topper defense held strong all-game long, allowing just 288 yards of total offense.

“I knew our defense would play at a high level,” Brohm said. “We’ve challenged them to be a dominating defense this year. Our guys played hard and they did the best job of coming ready to play.”

All of the positive takeaways that Brohm and his players discussed after the win hinged on two things: effort and toughness.

“I like the way we played as far as our effort, the toughness we had and the ability to play for four full quarters,” Brohm said.

Effort and toughness are two of the big things Brohm says he and his staff emphasize to their team each week, and they are two things the Toppers will need to bring an excess of when they travel to play the number-one ranked team in the country in Tuscaloosa, Alabama on Saturday.

“Everything that you look for in a championship team, they have,” Brohm said.

The Alabama Crimson Tide are coming off of a 52-6 shaming of the University of Southern California who has a defense full of top-notch recruits. The game will be the perfect opportunity for WKU to test its effort and toughness limits.