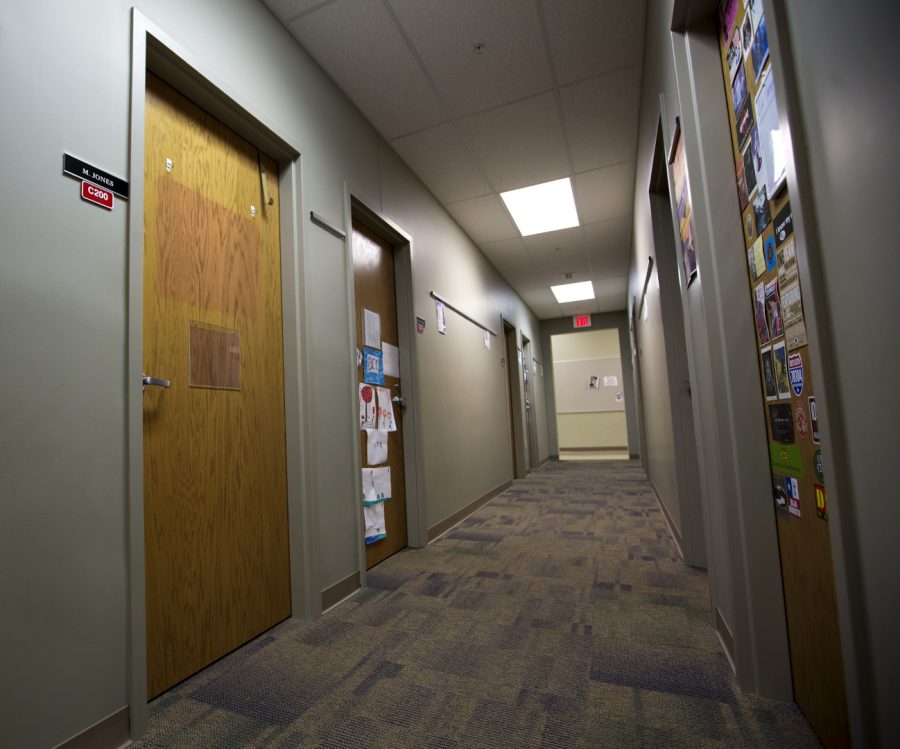 The office of Michelle Jones on South Campus, where two weeks ago there were several threatening and racist notes slid under her door. There is an ongoing police investigation into who was behind the notes.

President Gary Ransdell released a statement Sunday night publically denouncing an incident of racial hate against a WKU employee two days after the College Heights Herald published a story on the incident.

“We will have zero tolerance for actions by any among us at WKU who seek to degrade, discriminate against, or belittle others,” Ransdell said in an email to faculty and students. “However, I would caution all of us not to conclude that these actions by a few are reflective of the whole.”

Campus police are investigating the complaint filed by the assistant dean of the University College, Michelle Jones, after three threatening notes containing racist and hate-filled language were found in her office on South Campus.

Jones said she found the messages folded individually under her South Campus office door on Aug. 26, after not being in her office for a 10-day period. The documents were typed and printed with racial remarks targeting Jones for being an African-American.

The hallway Jones’ office is in is accessible to faculty and students, but she believes a university employee is responsible.

“I was in disbelief this could happen on campus,” Jones said. “Now I’m worried we have a faculty member thinking this way, teaching minority students who might not feel safe to speak up.”

She wouldn’t describe all of the hate speech in the messages, but did say one of the letters stated: “This is bullshit, you should take your black ass back to Africa so this campus and America can be great again.”

Jones said she had immediate hesitation about what to do after reading the messages, and sat alone in her office because she couldn’t believe what she read.

“I remember chuckling to myself because I thought at any moment someone was going to knock on my door and tell me I was being pranked,” Jones said.

A Herald request to campus police for the incident report and documents sent to Jones was denied, citing an ongoing investigation.

Sgt. Rafael Casas said the incident had been under investigation and the department would be interviewing employees who work near Jones’ office to see if anyone remembers seeing anything. Casas said there are cameras throughout the building, but not in the hallways where faculty members’ offices are located.

This is the second case of a WKU community member being targeted by racist actions this academic year. Cheyenne Mitchell, a senior from Lexington, had her car vandalized with a racial slur on Aug. 31.

Jones said she didn’t know why she had been targeted with the letters, but several administrators did confirm the subject of diversity and inclusion was heavily discussed at a University College faculty meeting scheduled to kick off the semester.

Vice Provost of Personnel and Policy Richard Miller said the subject needed to be heavily reviewed at the time because a candidate for the director of the School of University Studies, whom Miller said was an African-American woman, decided to end her candidacy during the search for the position.

Miller and Provost David Lee both confirmed the candidate cited several reasons for ending her candidacy, including an environment that made her feel uncomfortable.

“Any time we have a candidate end their candidacy because they perceive a problem with the work environment, there should be a call to address the issue,” Miller told the Herald on Friday.

It is not known how Jones was involved in this meeting, if at all, but Miller initially said the subject was geared toward work concerns for African-Americans. Jones is the only African-American administrator in the college.

“We have a despicable racist in our midst and every member of the WKU community should be outraged,” Miller said. “This is a hedonist, intolerable act this institution needs to take serious.”

On Sunday night, the editorial board of the Herald met with Lee, Chief Diversity Officer and Dean of Students Lynne Holland, Vice President of Public Affairs Robbin Taylor and interim director of the School of University Studies Dawn Hall to discuss the incident and how the campus community should proceed.

Herald editors were able to ask questions about the timeline of events and Hall explained what she witnessed after Jones found the letters on Aug. 26 in her office.

“Michelle was in shock, and [reacted] how would anyone react to this,” Hall said during the meeting.

Hall said she remembered missing a call from Jones the afternoon of Aug. 26 and later saw Jones bring the notes to the office of Merrill Price, associate dean of University College. Jones talked to Price about the incident and Hall said Jones decided to spend the rest of the day at home. After talking to Jones about the situation, Hall suggested a complaint should be filed with the university’s legal counsel and the campus police.

On the following Monday after the incident, Jones emailed the legal department and the Equal Employment Opportunity office to make an official report as well as making a report with the police.

Price said she and Jones attended a meeting with representatives from the university’s legal counsel and EEO on the following Monday after the incident to discuss the appropriate procedures. Price also confirmed the dean of University College, Dennis George, was told of the incident on that Friday and was officially notified on Monday.

Price also said the meeting with the University College faculty and staff wasn’t inspired by the former job candidate’s comment and her comment didn’t necessarily pertain to race.

“It’s kind of a misrepresentation because race wasn’t specifically mentioned, but you could maybe gather that from what she said,” Price said. “I do think it’s important to be concerned when a comment like that is made by a candidate, because successful women, especially women of color, have to do more to seem as competent to men when in certain environments. There can be unfair expectations.”

The Herald sought comment about the incident and the way it was handled from Holland on Thursday afternoon before the story was published online Friday, but she referred all questions to Provost David Lee in an email response to the Herald.

Miller and Lee confirmed they had both seen the letters sent to Jones and a conference call among administrators was arranged Sept. 2 to discuss what should happen next.

“Things like this get reported in a variety of ways with different offices notified at different times,” Lee said. “There were a number of folks who had a role who talked about how to proceed.”

Lee did have a meeting with members of the School of University Studies the Tuesday following the incident to briefly address that an incident had occurred and a fellow faculty member had been targeted.

“It just seemed natural that was the group who needed to be talked with because they are in the best position to provide support for Michelle,” Lee said. “We should be supportive of faculty who are targeted and try to resist fear and distrust that the perpetrator would like us to embrace.”

Despite the Sept. 2 conference call and Lee’s meeting with the School of University Studies, an official statement from university administration wasn’t released until after the Herald’s story was published online Sept. 9.

“The proper administrative response should have been proactive instead of reactive,” Miller said. “I think the institution’s response has been inadequate.”

In an interview Monday, Miller said the Sunday response from Ransdell was appropriate, but he would have preferred a more swift reaction from the WKU administration.

In an interview Thursday, Ransdell said he had been aware in passing that an incident may have occurred, but he wasn’t fully briefed on the situation until Thursday morning. Lee confirmed Ransdell was not in attendance at the Sept. 2 meeting.

Jones said she hopes the person who sent her the letters is removed so people won’t think that type of behavior is tolerable. She said safety isn’t necessarily a concern, as the way the writer went about the attack was “cowardly,” but she couldn’t help being disturbed by the incident.

“It’s been stressful,” Jones said. “I’m a resilient person and I thought I could handle things but I can’t handle the anonymity of the message. I’ll always have to wonder about other’s actions toward me and if they were the one who wrote it.”