Moonbeings arrive at the Hardin Planetarium 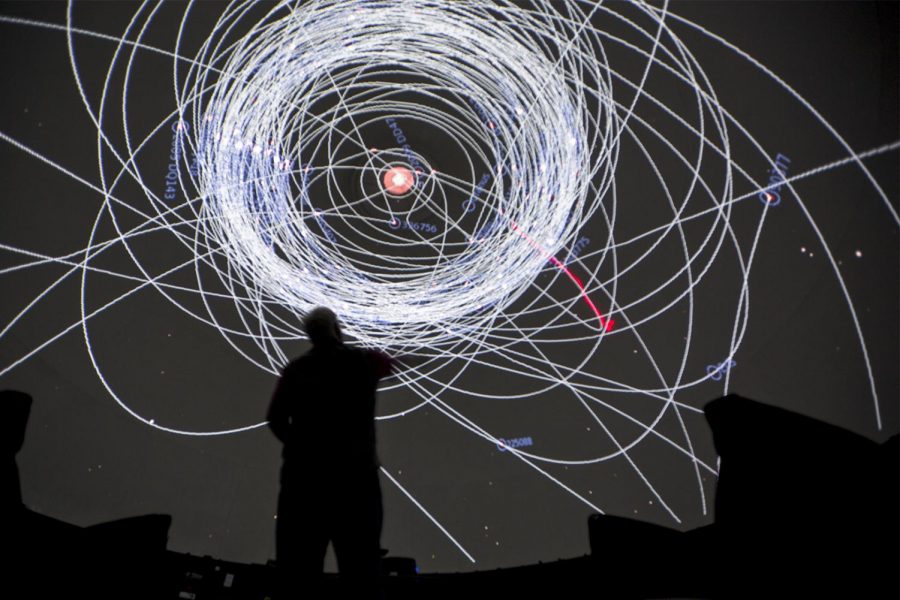 Teachers, students and Bowling Green residents attend the planetarium show "MoonBeings" on Tuesday, Sept. 13, 2016 at the Hardin Planetarium. The show explored the many different moons in the solar systems and tried to identify potentially inhabitable ones.

As the sun set on WKU, stars and planets filled the WKU Hardin Planetarium while interested spectators filed in for the free show titled “Moonbeings.”

Every Tuesday, Thursday and Sunday, the Hardin Planetarium at WKU performs a free show to students, staff, faculty and any other visitor interested in any aspect of astronomy and the sky above. The current show is running from Aug. 21 until Oct. 6.

According to the Planetarium’s website, “Moonbeings” is about “extending our search for life beyond Earth to the surprising diverse array of moons in our solar system.” Starting with Earth’s own moon, Ronn Kistler, planetarium coordinator, compared and contrasted the many moons of each planet in our solar system, discussing whether they could sustain life.

“It’s a great job,” Kistler said. “Basically, this is an informal science education facility. Informal in the sense that it is not like a classroom where people are expected to stay in their seats or come every time and do their homework and stuff. People can come in and out as they please and stay or leave if they get bored.”

Throughout the show, Kistler was aided by two students, using a projector to display the show onto the domed ceiling of the planetarium.

Kistler and his two student workers used the projector’s 360 degree capability to show spectators how it would be to zoom into outer space and see Bowling Green’s unfiltered night sky, using a software program in their computer systems. Each show is programmed and made by the workers and volunteers of the planetarium using free information that can be found through NASA and other space agencies.

Kistler and the other members of the planetarium staff used this information to piece together knowledge about moons and planets using actual NASA information. With the help of a globe, a foam ball and a YouTube video, Kistler explained the various components of Earth, the moon and if there could be life outside our planet.

Sophomore Joshua Goodpastor, one of the student workers, said he has been working in the planetarium for a year. Goodpastor is paid through the work study program to work with Kistler and the planetarium whenever it need helps.

“I am here one hour before every show and then I work to the end of the show,” Goodpastor said. “The other student worker does more technical work, and I am basically Ronn [Kistler]’s assistant.”

Throughout the show, Kistler used a laser pointer to point out various important topics while the student workers made sure the projector was on the right slide. Kistler used the 60-minute running time to interact with spectators by walking around and asking and answering questions.

“Our whole focus here is to try and keep them engaged so that they actually participate and learn something in the way of science,” Kistler said. “The more participation we get in the shows and the more active we can actually allow them to be in terms of interacting with the exhibit, the happier we are. So, that’s our goal.”

Juniors Sara Beth Matney and Ryan Sheppard both attended Tuesday night’s show. Both decided to come check it out after seeing the sign advertising a free show in front of the planetarium.

The planetarium is also able to use a regular projector to show regular movies like “The Martian” onto the domed ceiling, Kistler said. The Microbiology Club and various other clubs and classes borrow the facility to watch films or to use the planetarium for its star software.

“Most of the introductory astronomy classes and occasionally some of the more intermediate or advanced ones will come in once or twice a semester to do a special lesson,” Kistler said. “I think there is four or five sessions of basic astronomy classes that come in here over the course of the semester.”

“Moonbeings” will run until October 6, followed by “Life of Stars,” which will showcase the life cycles of stars. Free shows are on Sundays at 2 p.m., Tuesdays at 7 p.m. and on Thursdays at 7 p.m.