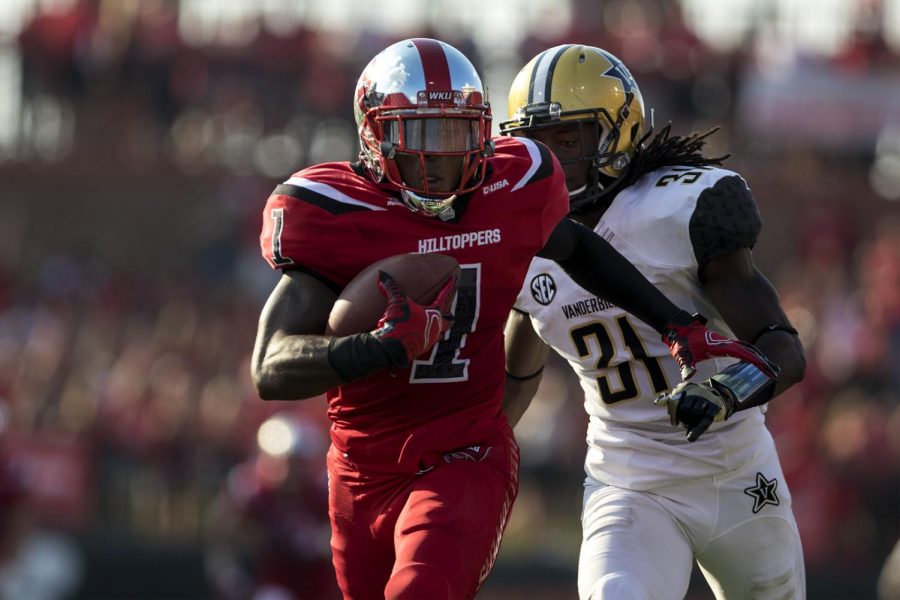 Making the transition from preparing for a SEC opponent to preparing for a football program that has only been in existence for three years is a unique challenge –– one that WKU faces as it welcomes FCS opponent Houston Baptist (2-2) to Bowling Green on Saturday.

“I think Houston Baptist is a young, emerging program,” Head Coach Jeff Brohm said. “They’re just trying to improve each and every week, but they’re going to come ready to play. We have to be sharp and sound in what we do.”

Being sharp and sound is one thing the Hilltoppers were not last week against Vanderbilt. After watching the film, there was a lot for Brohm and his team to unpack and emphasize heading into this week’s matchup with the Huskies.

After committing three turnovers in a game just once a season ago, WKU has turned the ball over at least twice in three of the four games it’s played so far, including back-to-back contests with three turnovers.

“It’s all about the details,” quarterbacks coach Brian Brohm said. “Everyone can draw up good plays and good schemes, but if we don’t focus on the details and the fundamentals, we’re going to get beat. We turned the ball over too much, struggled in the red zone and we have to get better in those areas.”

With consecutive drives ending in fumbles early in the game against the Commodores, Brian Brohm said capitalizing on scoring opportunities and ball security have become large areas of emphasis this week in practice.

“We need to work on it every day,” Brian Brohn said. “We’re focusing on ball security this week and had a little extra running anytime we saw there was any instance of insecurity with the football. I think guys got the message and we need to clean that up. We do have some younger guys in there, but that’s no excuse.”

The younger players Brian Brohm is referring to are two players the Toppers need to step up at this point in the season.

With redshirt sophomore running back D’Andre Ferby officially out for the season with a shoulder injury sustained in week one, freshman Quinton Baker and redshirt freshman Marquez Trigg are going to be expected to provide instant quality backfield depth moving forward.

“They gotta be ready to go,” Brian Brohm said. “It’s time to grow up fast. I know Quinton’s a freshman, but he’s got to grow up and be a player for us. We’re working him as hard as we can and trying to get him ready. I think he’s very receptive and doing a good job.”

After filling in admirably at Miami (Ohio) for senior running back Anthony “Ace” Wales, who rushed for 157 of the 210 total rushing yards against Vanderbilt, Baker struggled against the front of Vanderbilt. He finished the game with one carry for negative two yards and a fumble.

The backfield isn’t the only facet of this team that needs to improve quickly, as Jeff Brohm stressed the importance of the quarterback play following the loss Saturday.

“Mike’s going to continue to improve,” Jeff Brohm said. “He’s an accurate passer, and he understands our offense, but we need him to improve every week. We ask a lot of our quarterbacks and I think it’s important for him –– and we had to work on this with Brandon [Doughty] –– to find a way to create some plays and buy some time outside the pocket.”

Small things like forcing the ball into tight spaces and having ball after ball get batted down at the line of scrimmage like they were on numerous occasions Saturday, are issues the Brohm brothers know have to be fixed in order to get back to the exciting brand of offense they’re accustomed to giving to fans.

“I thought there was good and bad from what Mike did on Saturday,” Brian Brohm said. “We need to get better in the red zone and on the deep ball. In game one we were on fire, but we’ve been missing long on quite a few throws. We have to make sure we complete those shots when we have them.”

While Houston Baptist won’t provide a physical challenge like the oversized front from Vanderbilt did, Brian Brohm said that the Huskies require more of a mental preparation.

“Houston Baptist does a lot of different stuff on defense,” Brian Brohm said. “They’re going to blitz the heck out of us. It’s going to be a mental challenge for our O-line, our quarterback and our running back to be able to pick up all their pressures and make them pay for pressuring us. This week is going to be a mental grind for these guys.”

Among some of the other “small things” Jeff Brohm mentioned his team needed to focus on were not getting tired in the fourth quarter, getting defensive stops late in the game and better rotating by coaches.

For a defense that had outperformed its expectations from the preseason, senior defensive lineman Kalvin Robinson said the loss to Vanderbilt hurt that much more knowing it was so close.

“When you look yourself in the mirror you have to realize that football is a game of inches,” Robinson said. “It’s all about perfecting the small things because if you have too many of the small things that aren’t perfected, then you’re going to have bigger problems down the road.”

Despite not doing those small things a week ago in a game in which the Toppers were favored, Robinson’s confidence in his team is unwavering. Sitting at 2-2 a third of the way into the season, the senior said his team’s mentality hasn’t changed either.

“I like our football team,” Jeff Brohm said. “I think that we’re competitive and willing to play anybody. I think that we can compete and hang in there for a while with anybody. But we have to understand that in order to be a great football team you have to do the small things.”