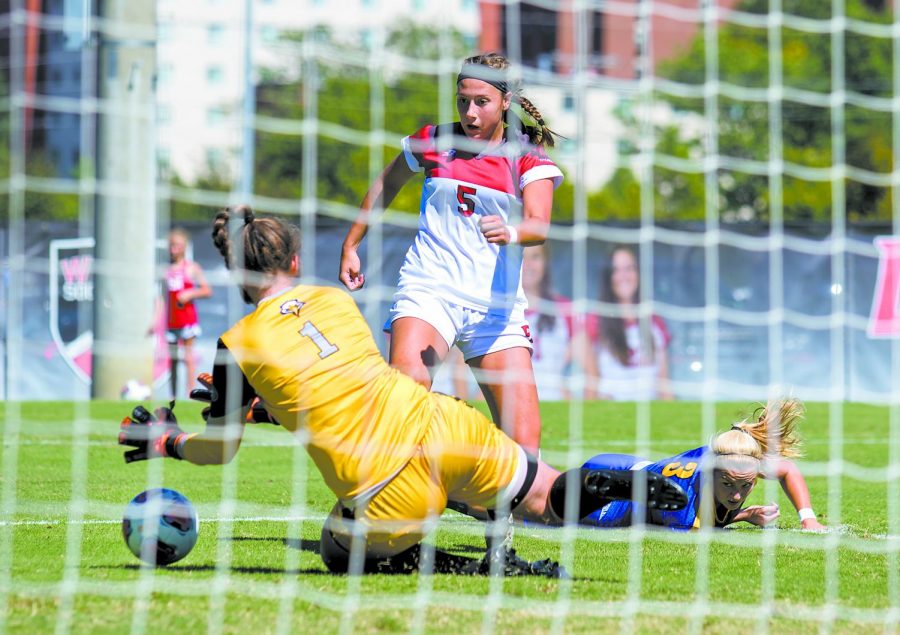 The WKU women’s soccer team took the field at the WKU Soccer Complex twice this weekend for two non-conference matches.

On Thursday versus the Tigers, the Lady Toppers found themselves trailing early off a single-digit goal from one of the opposing club’s junior forwards.

Delaney Sheehan found the back of the net at the 5:08 mark off a corner from freshman defender Marlena Cutura to record the game’s single goal.

LSU got off several shots over the course of the opening five minutes, but one was deflected while one was saved by WKU’s junior goalkeeper Allison Leone. The Tigers grabbed the 1-0 lead off the corner kick as Cutura found Sheehan’s head at the far post to beat Leone.

Although it trailed, WKU would battle back. Just three minutes following Sheehan’s header, freshman midfielder Christina Bragado tried a header of her own as she pushed Brockmeier into action.

The Lady Tops were rewarded four corners in a span of 15 minutes and nearly scored on senior defender Olivia Fitzgerald’s try at the 12:21 mark. The experienced player attempted a header, but it was cleared off the line by a LSU defender.

“I thought we played really well,” Head Coach Jason Neidell said following the defeat. “We had a couple of mistakes, one that ended up being costly on a corner kick early, but I’m really proud of our kids. I thought we gave tremendous effort tonight.”

WKU had another opportunity to try and tie the contest after junior defender Shayna Dheel controlled the ball in space after losing her defender in the 39th minute. The playmaker fired a shot toward the goal, but sent it just high as the Lady Tops went into the locker room with the one-score deficit.

“We just acted like it was still a ‘0-0 game’,” Fitzgerald stated on carrying the early deficit. “We just wanted to come back, keep fighting and don’t think about the goal that got put into the back of our net.”

In the first 15 minutes of the second half, Bragado and senior midfielder Haley Baldridge each had chances. Baldridge fired a strike from 25 yards out following a kick from the corner, but Brockmeier denied the opportunity. Bragado, on the other hand, tried a header off sophomore midfielder Nicole Roseland’s corner nine minutes later, but it was also saved by the Tiger goalkeeper.

“They’re a SEC school and they’re athletic, but I don’t think we struggled with that,” Fitzgerald noted. “We kept up with their athleticism and played really well.”

The Lady Toppers would be able to control the ball most of the final 10 minutes of action, but they couldn’t find an opening through LSU’s defense.

Senior midfielder Caitlin Hesse tried an attempt from the top of the box with 40 seconds remaining but it went wide left of the goal, allowing the Tigers to hold on for the victory.

“I’m proud of the way we played, there’s just little details that we need to take care of,” Hesse said. “That goal that we let slip in really early was something that we had talked about and wanted to make sure we didn’t let happen.”

Against the club from Morehead on Sunday, WKU turned things around and returned to the win column thanks to goals by freshman forward Chandler Backes in both the 16th and 58th minutes.

The Lady Toppers, as a whole, outshot the visiting Eagles, 22-4, including an 8-1 advantage in shots on goal. The team also had 13 corners compared to Morehead State’s two.

Backes fired a shot in the third minute, but the Eagles’ freshman goalkeeper Eva Helgadottir was there for the save, as she finished the meeting with eight.

“Well, obviously it wouldn’t have been the same game if she wasn’t on the field today, right?” Neidell said. “She’s been incredible. She’s a team player.”

The Lady Toppers would try eight more shots throughout the remainder of the half on the offensive side while the defense would keep Morehead State from attempting a single one as the home club led by a goal at intermission.

It would only take WKU four attempts before adding to its lead in the second half. Just over 13 minutes into the final half of play, Backes gathered a loose ball, controlled it and found herself in a one-on-one situation with Helgadottir, where she beat out the freshman and sunk a shot.

“All throughout the season, Jason [Neidell] has said that we should get into these opportunities to attack the keeper, and I just saw that the centerback was a little bit vulnerable and I could turn her, and I did and then just attacked the goalkeeper and slid it in,” Backes stated on her goal.

WKU, who now holds a 4-3-0 record, opens Conference USA play at Marshall on Thursday at 6 p.m.

The Lady Toppers hold a 2-1 lead in the all-time series against the Thundering Herd, but the Huntington, West Virginia, squad came into Bowling Green and escaped with a 2-0 victory in last season’s outing.

“It’s conference play now,” Neidell said. “Everyone’s looking to get off on the right foot. Marshall’s a great opponent, so we’re gonna have our hands full on Thursday night.”