WKU falls to Crimson Tide, Miami (OH) up next 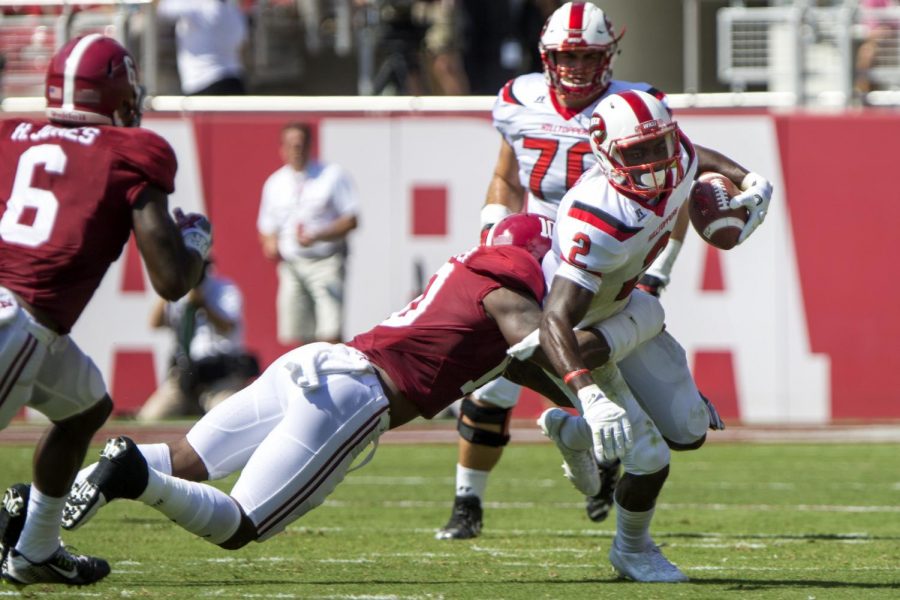 A week after opening its football season with a 46-14 blowout of Rice and piling up 649 total yards of offense, WKU traveled to the home of the defending national champions and fell 38-10 to the Alabama Crimson Tide with just 239 total yards to show for it.

“Hats off to Alabama, they’re a great football team and we knew that coming in,” Head Coach Jeff Brohm said. “They did a great job on defense as they always do. They were able to shut us down, and we didn’t have a whole lot of answers. I thought our defense played hard, and I liked the fight in our team.”

Redshirt junior quarterback Mike White struggled against the Tide, following up his 517-yard debut by going 10-24 for 135 yards and an interception. But if there’s any defense in the country that can make the nation’s leading passer look average, it’s one led by Nick Saban.

“They were bigger, faster and stronger than Conference USA opponents and they gave us a run for our money,” redshirt senior offensive lineman Forrest Lamp said. “It’s frustrating when the offense isn’t clicking like it normally is. We’re used to scoring 40 or 50 points a game, so it’s frustrating.”

White left the game in the third quarter with a head injury. Graduate transfer Tyler Ferguson replaced him, going 7-10 for 55 yards. Sophomore quarterback Drew Eckels entered the game late and threw the only WKU touchdown of the game to redshirt freshman Lucky Jackson.

“I think Mike will be OK,” Brohm said. “He got a little doozie on the unnecessary roughness penalty where they threw him down. We decided that he wasn’t all where he needed to be and we brought our other quarterbacks in.”

In a Monday afternoon press conference, Brohm said he is optimistic of White’s status for Saturday’s game against Miami, Ohio.

“I think to this point he’s looking pretty good,” Brohm said. “I think he’ll pass all the tests that he needs to. We probably won’t know for a couple days, but I think he wants to play, and I think he wants to get back in there. Our other two quarterbacks are going to work hard to be ready just in case.”

What White failed to accomplish on offense, the defensive line tried to make up for on the other side of the ball.

After a three-and-out by WKU to start the game, Alabama sophomore wide receiver Calvin Ridley ripped off the first of many big plays for the Tide, taking a pitch 48 yards to the WKU 31-yard line. But the Hilltopper defense forced the offense off the field resulting in a missed field goal by Alabama.

“Our defense played unbelievable,” Lamp said. “All the credit goes to our defense, holding the number one team in the nation to 38 points. They were the ones who kept us in the game.”

The Hilltopper secondary was an entirely different story, however, as they gave up one big play after another to Ridley and redshirt junior receiver ArDarius Stewart. The two wideouts combined for two touchdowns and torched the Tops’ secondary for 237 of Alabama’s 475 total yards.

“They’ve got athletes all over. All of their players have the measurables, and they’re tough to defend,” Brohm said. “Their perimeter players are good, and they have a good young quarterback who can run the ball, move the pocket with him and he can chuck it deep. They obviously are the best team for a reason.”

WKU’s offense failed to string together enough positive plays to move the chains, but Brohm didn’t forget his bag of tricks and exciting brand of football in Bowling Green.

After 12 consecutive pass plays to open the game, it appeared redshirt senior running back Anthony “Ace” Wales was going to record WKU’s first carry of the game, until he pitched the ball back to White who found senior wide receiver Taywan Taylor for a 59-yard gain on Brohm’s patented flea flicker play.

The big gain led to a 26-yard field goal three plays later, giving the Tops their first points of the game.

“We knew we had to take some shots up the field and in one-on-one matchups, but unfortunately we didn’t win,” Brohm said. “We had the one trick play early but other than that it was hard to move the ball effectively and get yards. They make you earn it.”

But back-to-back WKU interceptions in the next two offensive series — including a 55-yard interception returned for a touchdown by Alabama senior safety Eddie Jackson — took all of the remaining air out of the Hilltoppers.

WKU entered halftime trailing 17-3 and was never able to get any traction, surrendering 21 second-half points.

“I think the best thing that our team does is we play one week at a time,” Brohm said. “We know we’re going to have a couple really tough games on our schedule each year, and that’s how we want it. We have to find a way to learn how to compete get a little closer in these types of games.”

After a week in which they played “Sweet Home Alabama” and “Dixieland Delight” during practice to get used to the crowd noise in Bryant-Denny Stadium, the Hilltoppers will change the tune but keep the intensity levels high in preparation for Miami (OH), another non-conference opponent.

“Going into this game at Miami, we’re going to have to have the same intensity going into Bama by treating them like they’re the highest in the country,” junior wide receiver Nacarius Fant said. “Last game we came out with energy and this game we’re going to do the same thing and come ready to play.”

Coming off a game in which the defense performed admirably against the best team in the nation, Brohm expects his offense to regain the pace and production from week one.

“I like the way we’ve played to this point, and we’ve got to continue to build upon that and understand that [the defense] has to carry us for a while,” Brohm said. “Our offense needs to catch up.”