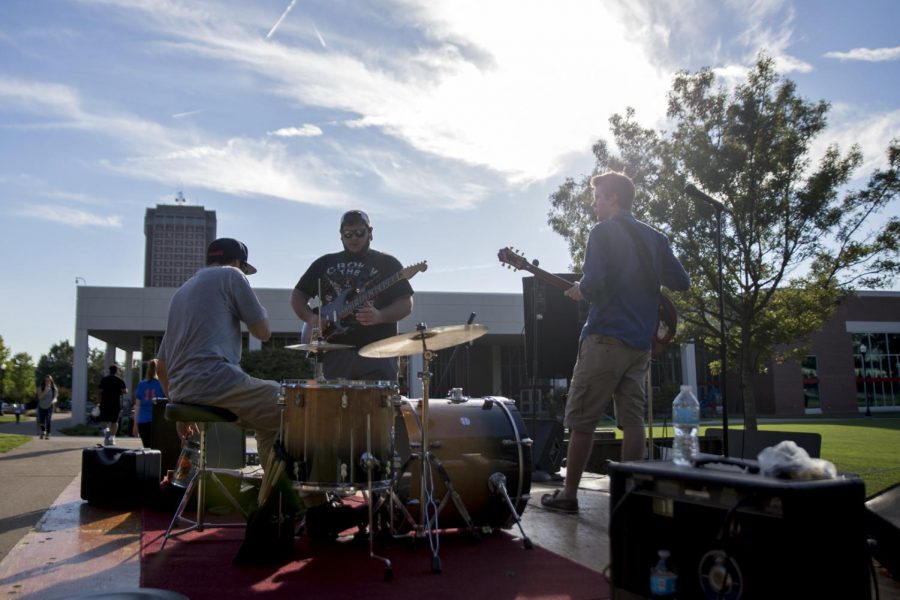 San Miguel de Allende, Guanajuato, Mexico junior, Yan Garza, 21, on drums, Shelbyville sophomore, David Johnson, 19, on guitar, and Shelbyville junior Max Will, 21, on rhythm guitar and vocals play together as Remanence on Tuesday, Sept. 20 at Rocksober Fest on South Lawn. The trio have been playing together for about a year since they met at WKU. Kathryn Zeisig/HERALD

Seven months ago, three WKU students came together, each bringing an individual musical style to create their alternative band, “Remanence.”

Johnson and Will played together in various bands during those four years; they formed Remanence after meeting Yan Garza, a junior from Mexico. Garza joined the band to play drums.

The three band members have all been interested in music for a long time. Will said his love for music began at age 5 after watching The Beatles perform on British rock/pop music television program “Ready, Steady, Go!”

Johnson’s musical interest began when he joined choir in high school. Will said he encouraged Johnson to pick up a guitar in a “friendly little challenge.”

“Will said I couldn’t do it,” Johnson said.

Garza has played violin since he was 5, and began playing the drums at age 11.

Each band member has a variety of musical influences affecting his personal style: Will said he has been most influenced by The Beatles, U2 and Coldplay, while Johnson prefers Led Zeppelin, The Black Keys and Eric Clapton. Garza said his range of influence is a bit wider, including Miles Davis, Animals as Leaders and Dennis Chambers.

With each style brought by each individual, the band as a whole said it’s difficult to describe a genre it fits into.

“We like to say alternative because it’s such a blanket term for all the alt bands out there, but we pull influences from everywhere,” Will said. “We don’t really know yet.”

Will said it’s important for each member to have chemistry with each other to create a successful and happy band.

“It’s all about the music,” Garza said. You have to have a true passion for music to be in a band, he said.

Each member expressed an interest in pursuing music as a professional career; Garza is a music major, and Johnson studies music education. All three agree working with music is something they want to do for the rest of their lives, whether it remains a hobby or they make a full-time career out of it.

Remanence has finished five songs for an EP they plan to release around Christmastime. It will also have merchandise available for purchase.

Remanence will have its next performance on Oct. 8 in Shelbyville in a benefit to raise money for WKU’s department of music.