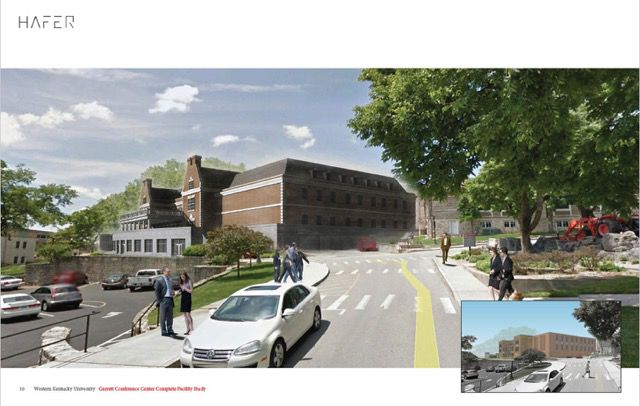 Designer's rendering of what the renovated Garrett Conference Center may look like after construction.

WKU has begun the process of searching for vendors to help fund the renovation of Garrett Conference Center in the coming months, according to WKU officials.

Bryan Russell, chief facilities officer, said Garrett has had no major updates since it was built in 1951. At the time it was built, Russell said only the basement and first floor were constructed. In the 1960’s, the building was added onto, according to Russell.

“The plumbing, the wiring … the air conditioning has not been updated, and so it is failing,” Russell said. “It is old.”

Russell said the building relies on a two-pipe system for heating and cooling, which results in the building being too hot or too cold during certain times of the year. He said during those times of year, the building becomes “uncomfortable for the occupants.”

“It’s all about quality at the end of the day,” Russell said. “The building is just tired.”

Russell also said by renovating, the current accessibility issues with the building would be able to be addressed.

“We knew that was the last building that we haven’t really renovated,” Meszaros said.

Since Garrett is categorized as an auxiliary building, WKU will not use state funding for the renovations. Instead, WKU has released a request for proposals otherwise known as RFP, in which an outside vendor would bid on and fund the renovations.

According to Meszaros, WKU released the RFP in mid-July, and will be open for proposals until Oct. 21. Meszaros said WKU has recently heard back from several companies, and were able to provide more information about the building and renovations to those companies.

Meszaros also said the RFP tells companies about the school and gives specifics about the current food programs on campus. Meszaros said in turn, the companies are able to offer alternatives and suggestions for programs and additions to Garrett Conference Center that would improve the building and services offered. Russell said the RFPs give the campus “the opportunity to see what a professional recommends.”

Ann Mead, senior vice president for finance and administration, said releasing an RFP comes with “an expectation that the proposals we receive would include renovation and possible expansion” of Garrett.

“We need to work in partnership with our dining venue,” Mead said.

According to Meszaros, the RFP serves as a “sales job” to attract potential contractors. Meszaros said Aramark, Sodexo and Chartwells have all responded to the RFP, and come and toured the campus.

“They’re the experts,” Meszaros said. “We say, ‘Here’s what the campus looks like, what do you think you can do?’”

Mead said they hope to have a selection from the RFPs by the end of the year, and the current contract ends on June 30, 2017. According to Mead, they want the new company to be ready to take over on July 1, 2017.

According to the administration, renovations are necessary for Garrett as the campus continues to expand. Mead cited the long lines at Panda Express and students wanting healthier food options as more reasons to renovate the building.