Hilltoppers ready for shot at the defending National Champions 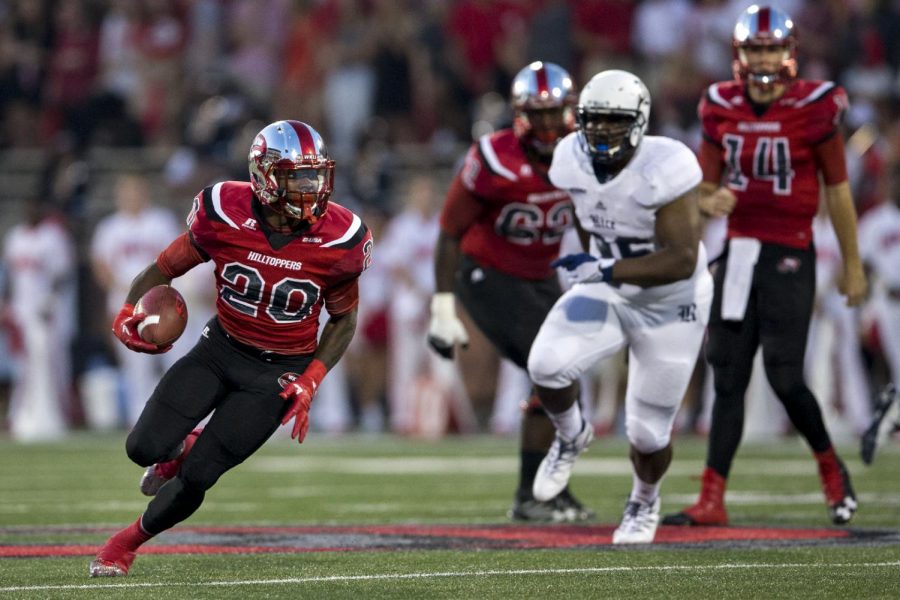 Redshirt senior running back Anthony Wales (20) sprints down field after catching a pass during WKU's 46-14 win against Rice on Thursday, Sept. 1 at Smith Stadium. Kathryn Ziesig/HERALD

Head Coach Jeff Brohm has been honest when discussing Saturday’s game against the consensus No. 1 team in the nation, the University of Alabama.

“We’re not blind,” Brohm said. “We see what everyone else sees, and this is the very best team in the country. They’ve got tremendous talent, great size and great speed at every position. There are no weaknesses, and their coach is probably the best coach in the country.”

And while Brohm knows that his team will be a big underdog to the Crimson Tide, he’s been here before and understands the importance of a game against a nationally ranked, Power-5 opponent.

“Throughout the entire year, everyone’s talked about this game,” Brohm said. “I heard about it all summer and all spring. These are the type of games you want to see and as players, we have some good players that want to go down there and showcase what they’re about.”

For senior safety Marcus Ward, this game will be a little bit more special as he returns to his home state where his football journey began.

“It’s a cool experience to get to play a team that I’ve been watching since I’ve been interested in football,” Ward said. “It’s one of those cool experiences that you get to insert yourself into after watching from the sides for so long.”

Ward, a Birmingham native, is one of four WKU starters originally from Alabama, and he understands the level of impact an environment like Tuscaloosa can have on a game.

“When you go into these types of games, the biggest thing is the atmosphere,” Ward said. “You’ve got to block it out and understand that they are the No. 1 team and we’re not missing that point, but you have to play them like it’s just another team.”

A big part of what earns the Tide top acclaim nationally is its defense. There are currently 28 former Alabama defensive players in the NFL. Redshirt senior left tackle Forrest Lamp will be partly responsible for stopping the next crop of future pros charging at him on Saturday.

The Hilltoppers got a more-helpful-than-usual preview of exactly what that Crimson Tide defense is all about last week as the University of Southern California got a shot at the reigning national champions in Arlington, Texas.

Of course, the Trojan offense is now led by former WKU offensive coordinator Tyson Helton who took part of his staff at WKU with him to Southern California in the offseason.

“We just look for [Alabama’s] pass moves and what they did against USC,” Lamp said. “We’re pretty similar to USC’s offense. Obviously we’ve had a couple coaches go out there so we just look at their techniques and what they like to do. They rotate a decent bit and they go about three deep.”

Alabama is equally talented on the offensive side of the ball, and a versatility factor comes into play with its multiple quarterback system.

Redshirt freshman quarterback Blake Barnett started the game against USC, before being replaced early by true freshman Jalen Hurts. The two quarterbacks combined for 218 passing yards and three touchdowns, with Hurts adding 32 yards on the ground for two more scores in the Tide’s 52-6 shaming of the Trojans.

“We’ve been in the situation before where the quarterback situation has a lot of variation to it, so you just prepare for anything,” Ward said.

Up to this point, Brohm has emphasized that the Toppers must stay out of their own way to begin the game. He also stressed the importance of paying attention to detail, something he thinks his team did well against Rice.

For WKU it all starts with redshirt junior quarterback Mike White. As the nation’s leading passer after one game, White’s teammates know how important he is for the team’s success.

“It starts with us,” Lamp said of the offensive line. “If Mike doesn’t have time then he can’t complete the passes that we need to make and it’s all about the little things. We have to complete the little runs, the little passes and checkdowns; we gotta do it all.”

White was 25-31 for 517 yards and three touchdowns against Rice, but both he and his coach know things won’t be as easy for him in Tuscaloosa.

White and the offense will start off a bit shorthanded to begin the game, as Brohm said he doesn’t expect redshirt sophomore running back D’Andre Ferby to be available for the game with a shoulder injury he sustained against Rice.

“I feel like [Trigg and Baker] got all of their jitters out and it makes them more comfortable going into the game knowing that it’s not their first snap,” redshirt junior return specialist Kylen Towner said. “I feel like they’re more comfortable and can make some big plays hopefully.”

In a game against the No. 1 team in the nation, every facet of the game comes into play. Win or lose, Ward and his teammates will be up to the challenge come 2:30 p.m. Saturday.

“We know who we are and we know what we’re capable of, so we’re just going to take that into Alabama knowing that we’re all we’ve got,” Ward said. “We’ll be ready for the challenge coming up against the best team in the country.”