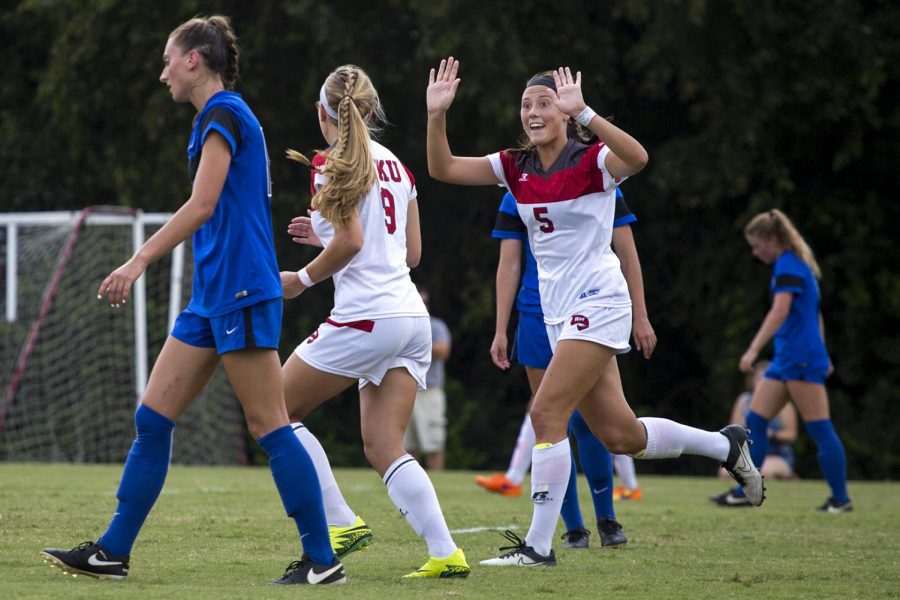 After opening its first home-stand of the regular-season with wins on Friday and Sunday, the Lady Topper soccer team will look to do the same this weekend against two more clubs at the WKU Soccer Complex.

“We’re learning a lot as a team,” Head Coach Jason Neidell said as he previewed this week’s matches. “We’re making some strides in the right direction. We’re also playing with a lot of confidence.”

WKU (3-2-0) defeated Austin Peay State University, 2-1 in overtime to open the home slate, and then followed that with a 4-0 shutout victory over Georgia State University.

The LSU Tigers (3-3-0) have won two-straight matches as the Southeastern Conference program picked up a 3-0 shutout win at Indiana University back on Friday before grabbing a 2-1 victory at Butler University on Sunday.

LSU is currently tied for sixth place in the Southeastern Conference’s non-conference standings with Auburn University and the University of Tennessee. The Tigers have just one non-conference contest remaining, with that being against the Lady Toppers.

The forwards Neidell is referring to are senior Summer Clarke and junior Jorian Baucom.

Baucom leads the team in goals scored at four, has recorded 10 shots on goal and has a goal percentage of .211. Clarke, on the other hand, has scored once this year and has hit three shots on goal. The two pace the Tiger club.

Morehead State is another solid team WKU will encounter to wrap-up the home-stand Sunday. The Eagles have won two games, been defeated in two and tied in one, giving it a record of 2-2-1.

In MSU’s last two outings, the Eagles have been able to pick up one win while tying in another match. Morehead welcomed the University of Evansville onto its home field, where it grabbed a 3-2 victory before drawing a 0-0 decision against the University of Chattanooga on Sunday.

The Eagles will play against Western Carolina University on Friday at home before coming to the Hill.

“There is another good team,” Neidell said about MSU. “They’ve had some good results this year. It’s always difficult playing an in-state rival.”

Against Georgia State University on Sunday, WKU came out of the gates firing, which helped the team achieve another win.

Freshman forward Chandler Backes, who found the back of the net twice versus the Panthers, was named to Top Drawer Soccer’s National Team of the Week and was also tabbed Conference USA’s Offensive Player of the Week.

“We’re excited about Chandler [Backes],” Neidell said. “Not only has she been able to score goals, but she’s been able to open up opportunities for other players.”

The Lady Toppers, as a team, have scored 15 goals so far on the year. Last season, the team only scored 20 total.

Morehead State is led by freshman forward Ashley Ritchie. Ritchie leads the Eagles’ team in goals scored at three and averages 2.60 shots per match. The all-around athlete has also tallied an assist so far in the season.

On the defensive side of the ball, the Eagles are paced by freshman goalkeeper Caitlynn Mason. The La Grange native has tallied 14 saves already on the season while having faced 45 total shots from opposing teams.

Relating back to Thursday night’s affair with Louisiana State, Neidell, his assistant coaches and all of his players are hoping to set to the attendance record at the WKU Soccer Complex. The record is a little under 700 people.

“It’s gonna be an exciting game,” Neidell said. “Not often do we have a Thursday night game, and not to mention that no other sport teams are playing at home. I encourage all fans to come out and enjoy a good soccer match.”