Injuries open up new opportunities for Baker, others 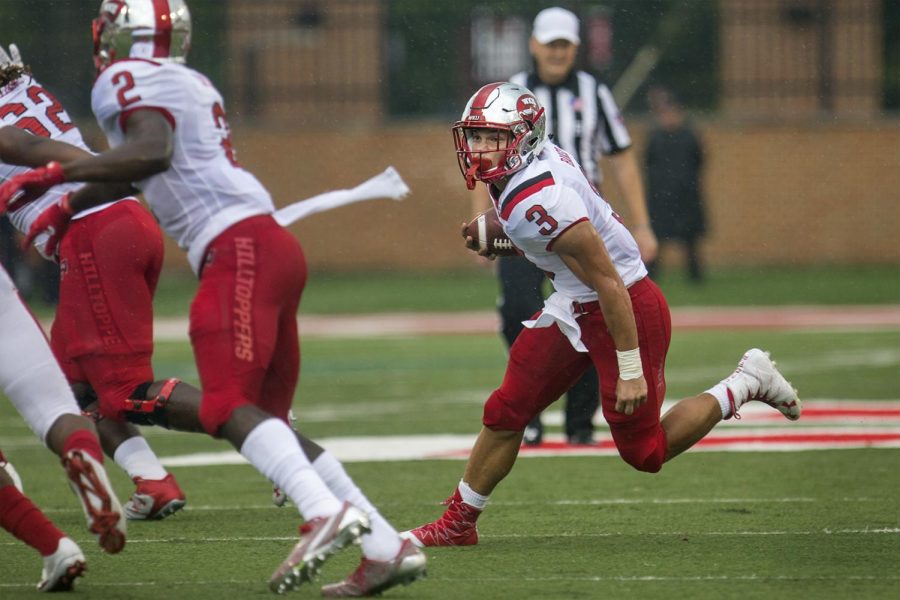 Freshman running back Quinton Baker (3) runs from the defense during the first half of the Hilltoppers' 31-24 win over Miami on Saturday Sept. 17, 2016 at Yager Stadium in Oxford, Ohio.

With Vanderbilt coming to Smith Stadium today, WKU isn’t as healthy as a team would like to be heading into arguably its biggest non-conference home game in program history.

Here are a few Hilltoppers who will get an opportunity to step up against the Commodores on Saturday in place of some injured starters.

The running back depth chart looks completely different than it did when the Toppers and Commodores went at it in Nashville a year ago. Redshirt senior Leon Allen was WKU’s leading rusher gaining 56 yards on the ground in the 14-12 slugfest a year ago. One week later Allen went down with a gruesome knee injury and he hasn’t seen the field since.

The second leading rusher in last year’s game was redshirt sophomore D’Andre Ferby, who gained just 14 yards on the ground and is currently out for an undisclosed amount of time with a shoulder injury he sustained in the first half of this season’s opener against Rice.

To make things even more complicated, normal starter redshirt senior Anthony “Ace” Wales didn’t play last week against Miami (Ohio) and was listed as questionable with a hamstring injury all week during practice.

So with the top two rushing options sidelined, freshman Quinton Baker will earn a lot of playing time for a second consecutive game against a talented defensive front. Against Miami (Ohio) Baker racked up 103 yards on the ground along with a touchdown.

Jeff Brohm described redshirt senior left tackle Forrest Lamp as “the rock” of his team over the past three seasons, and he isn’t wrong.

Lamp has started in all 42 games he’s been eligible for since he got to WKU, but that streak will come to an end Saturday.

While WKU’s secondary has been shaky at times over the past two seasons, one player has consistently performed well at the safety position for defensive coordinator Nick Holt.

He is senior Marcus Ward, and he will not be available for Holt to use on the field today.

Ward left in the third quarter of the game against the University of Alabama two weeks ago with an undisclosed injury, and Brohm doesn’t expect him back anytime soon.

Being down a key cog in the secondary means sophomore safety Drell Greene will make his second career start Saturday after recording a career-high five tackles against the Redhawks a week ago.

Greene was the only true freshman to see game action last year for the Tops, as he played in the final 11 games down the stretch.

While Baker is expected to handle the bulk of the rushing responsibilities against the Commodores, Trigg will likely see action in a backup role.

Brohm mentioned he needed to “find more creative ways to run the ball” compared to what the Toppers have done up to this point in the season.

Trigg is a talented back who has shown flashes of potential in the time he has gotten thus far. He picked up 22 yards on seven touches last week while spelling Baker.