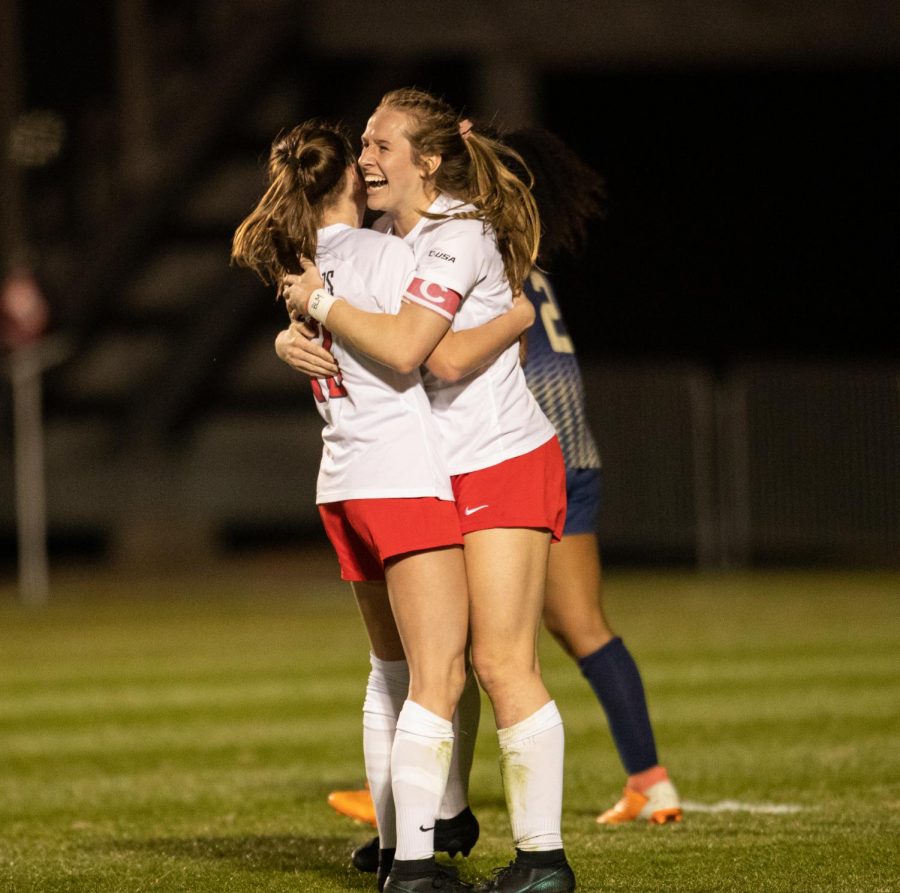 WKU women’s soccer player Katie Erwin (13) celebrates with her teammate Ambere Barnett (15) after a big goal to put Western up two goals against their opponent FIU after their game on March 4, 2021.

WKU is now 2-0-2 in its last four matches heading into the regular season finale at home next Friday against Charlotte.

With the draw WKU now has clinched a C-USA Tournament berth. If WKU is to win next Friday against Charlotte the Lady Toppers will lock in the No. 1 seed in the East Division.

Winning the division also means WKU will have won its first regular season title since 2013.

“ODU is always a tough team,” head coach Jason Neidell said. “They are well-organized, physical, and technical in the right places. Playing here at ODU has been an incredible challenge for us since we joined C-USA. I am proud of our effort and fight tonight. The tie officially clinched out spot in the C-USA Tournament and has set up an opportunity to win the East Division championship next week against Charlotte. I am really happy for our players.”

WKU is off to their best start since 2008, and their last loss came on Feb. 6 against North Alabama. WKU carried a lot of momentum into the match following their 1-0 win against Louisville last Saturday.

Coming into Friday’s match WKU junior midfielder Ambere Barnett ranked second in C-USA for points per game at 1.71 and third with five goals on the season.

ODU senior midfielder Morgan Hall lifted the Lady Monarchs to a draw with her second goal of the season at the 78th minute of the match.

Defense would be a strong suit for both teams this match, and it turned out to be a close one to the very end.

The start of the match was a defensive battle. Neither program was able to get an edge over the other in the first minutes.

Hall took a shot on the goal at the 17th minute, and WKU sophomore goalkeeper Ashley Kobylinski was there to snag it for her first save of the game.

WKU freshman midfielder Annah Hopkins’ shot on goal in the 23rd minute was snagged by ODU senior goalkeeper Kasey Perry for her first save of the game.

Barnett notched her sixth goal of the season for WKU at the 34th minute to give the Lady Toppers a 1-0 edge over the Monarchs.

At the end of the first half, WKU led in shots 7-2, goals, and shots on goal 3-1. ODU led in saves 2-1. The Monarchs led early in the match 2-0 on shots, but they were overwhelmed with seven straight shots by the Lady Toppers.

Hall came up huge for the Lady Monarchs with her goal off redshirt sophomore midfielder Emily Garrick’s assist at the 78th minute. ODU tied the game 1-1.

The late goal by Hall sent the match into overtime. This was the second time in the regular season WKU went to extra time.

10 more minutes of play didn’t cut it for the Monarchs and Hilltoppers as neither team could notch a goal in the first overtime. Freshman Brina Micheels had the lone attempted shot in the first 10 minutes of the extra time.

Neither team could edge it out in the second overtime which ended in a 1-1 draw.