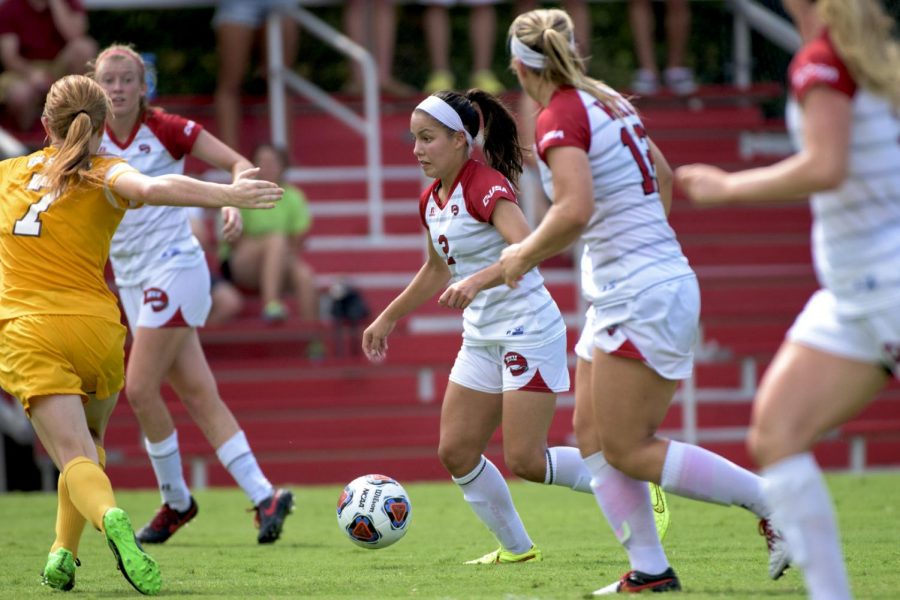 After playing its first three regular-season matches on the road, the WKU women’s soccer team returns home to kickoff a lengthy homestand by hosting Austin Peay State University on Friday night and Georgia State University on Sunday afternoon at the WKU Soccer Complex.

“I think we’re excited to play in front of our home crowd on our home field,” Head Coach Jason Neidell said. “I feel our players have a chip on their shoulder and are going to do what it takes to win.”

The Austin Peay Governors, who are off to a 3-0 start on the year, have outscored their opponents 8-2 on goals and currently average 2.67 goals scored per game.

APSU opened its season with a pair of road wins as it defeated the University of Alabama at Birmingham 2-1 and picked up a 4-1 victory at Alabama State University before recently kicking off its home slate with a 2-0 shutout against the University of Evansville this past Sunday.

“They’re a really good team,” Neidell said. “They’re a quality team. We’re excited to play a 3-0 team. That’s the script that we want and we’re excited about it.”

Georgia State, on the other hand, hasn’t performed quite the way Austin Peay has. The Panthers have won one game, been beat in one and have tied in two, giving them a record of 1-1-2.

GSU began its season with a 3-0 shutout win at home versus Alabama State back on Aug. 19, followed that with a 0-0 tie at Kennesaw State University, then dropped a 4-1 decision in Atlanta, Georgia, against the University of Charlotte before ending with a 0-0 double-overtime tie vs. Jacksonville State.

Against the University of Miami at Ohio RedHawks, WKU found itself holding a 2-0 lead all throughout the first half following senior forward Iris Dunn’s scores in both the seventh and 33rd minutes, but would suffer the defeat after the home club stormed back and walked away with the one-goal victory in extra minutes.

“Fantastic,” Neidell said on Dunn’s first two goals of the season. “We wanted to get Iris going. I think it gave her confidence. Right now, we have three players with multi-goals –– two of them weren’t even on the team last year. We’ve scored nine goals in three games.”

The Lady Toppers outshot Miami 20-10 and had a 10-6 advantage in shots on goal, but Miami (Ohio)’s experienced goalkeepers in senior Vic Maniaci and sophomore Patricia Koutoulas combined for eight saves to keep WKU from scoring more than the two goals it did.

In APSU’s game versus the Purple Aces, Robertson scored in the 67th minute to help push her squad to the shutout win.

On the defensive side of the ball, the Governors are paced by freshman goalkeeper Mary Parker Powell. Standing at 5-foot-8, Paker-Powell has tallied four saves on the season to the 13 opponents she has faced.

Redshirt junior goalkeeper Brie Haynes is the player to keep a close eye on for Georgia State. The versatile net defender has recorded 16 saves already on the season and keeps climbing her way up the program’s all-time saves ladder.

Against Jacksonville State in the extra-minute tie, Haynes recorded six saves –– all of which could’ve easily found the back of the net –– to keep her team from suffering a defeat.

“They’re a quality team,” Neidell said of Georgia State. “We split with them on the road last season. I think we’ve played them twice ever and have been beat in both.”

The Lady Toppers have never dropped a game to the Governors, holding a 6-0-1 record in the all-time series. In the most recent encounter back on Sept. 5, 2013, at the WKU Soccer Complex, the two sides drew a 1-1 decision.

Against Georgia State, WKU and the Panthers tied in a 1-1 decision back on Sept. 13, 2015. In what was the Lady Toppers’ third-straight overtime contest, now-junior midfielder Hannah Chua scored in the 79th minute to keep her unit from suffering a loss on the road.

WKU and Austin Peay are set to kickoff at 6 p.m. Friday while the Lady Toppers’ and Georgia State are scheduled to get underway at 1 p.m. Sunday.

“I think our girls have the mindset of going 2-0 this weekend,” Neidell said.