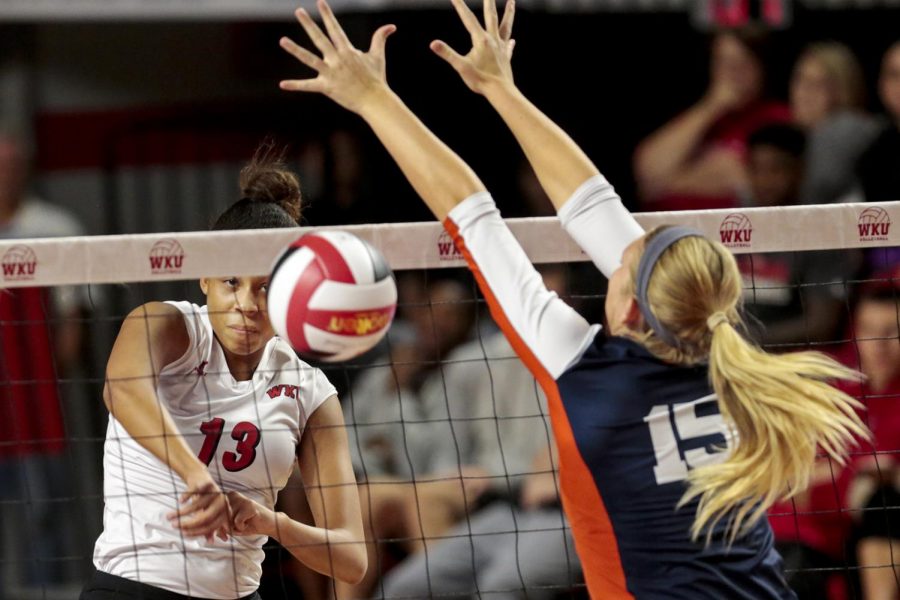 The WKU Volleyball team met with media last week for the first time this season as their preseason No. 22 national ranking in the AVCA preseason poll gave the team extra excitement to start their season.

“I think it’s the sixth straight season that we’ve been ranked in the top 25 at some point,” head coach Travis Hudson said. “That’s a pretty remarkable stretch we’re in right now. It continues to speak to the credibility of our program nationally. I think winning in the NCAA tournament last year helped a lot with regards to that.”

“We were really excited about the rankings, it’s always great to see you start there,” senior defensive specialist Georgia O’Connell said.

With a 32-4 record last year, including a win over the University of Arizona in the NCAA tournament and a win over fifth-ranked University of Wisconsin, the Lady Toppers are familiar with success.

Through WKU’s second season in Conference-USA, the Lady Toppers have won the league and the conference tournament twice.

It may be challenging for Hudson and company to match the success of the past two seasons, but the team is returning a talented roster despite losing three seniors.

“We feel we have that kind of talent,” Hudson said. “We’ve got some obstacles we have to overcome. My biggest fear with this group is depth. We don’t have great depth. We gotta stay healthy, if we are healthy then I think we got a chance to win every night.”

One player who will be asked to help lead the Lady Topper effort this season will be junior setter Jessica Lucas, the C-USA preseason player of the year. Lucas is a two-time All American and is the reigning C-USA setter of the year.

Last season Lucas managed to record 1,397 assists and 11.18 assists per set, both of which were team highs.

“Jessica being the preseason player of the year this year was a little bit of a surprise to me because setters get overlooked sometimes,” Hudson said.

Sophomore middle hitter Rachel Anderson will also be a critical piece of the WKU attack this season as she was able to claim freshman of the year in C-USA last season. Anderson was second on the team last season in blocks per set at 0.79.

With the loss of Noelle Langenkamp, Anderson will likely play an even bigger role this season as Langenkamp was able to score a team-high 444 points last season.

“She [Anderson] is an incredibly talented kid,” Hudson said. “We are very fortunate that she has on a WKU jersey. Rachel Anderson is as good as anyone in this league and she needs to go out and be that every night for us. It’s gonna be a big story this year. I think we will be great if she’s great.”

The first game for WKU will be Friday, Aug. 26, as the Lady Toppers will take on the Bobcats of Ohio University as part of the Bobcat Invitational in Athens, Ohio. The match is set to start at 5 p.m.