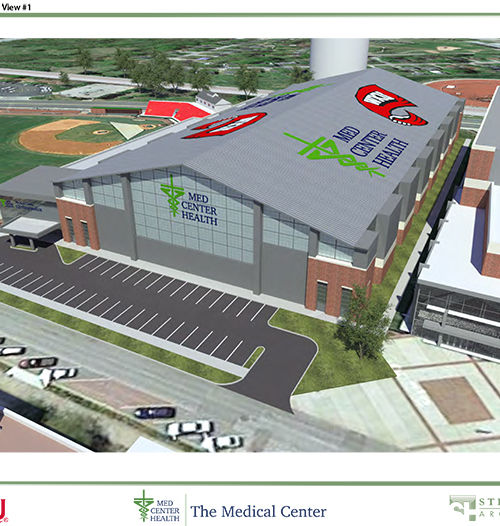 An additional 83,000 square feet will be an indoor multipurpose training facility for use by the Physical Therapy program students and WKU athletics.

The existing football field will be enclosed in the facility and the surface will be replaced with an artificial turf. Enclosure of the existing practice field will create an indoor training/education facility that can be used year-round by the campus and for other community based events promoting good health and exercise.

The new facility will also include a full-size practice field for football; sprint lanes for track and training; netting for baseball, softball and golf; a high jump area; a long jump pit; and a pole vault pit. Construction is expected to be completed in late spring of 2018.

President Gary Ransdell said in a press release that this new facility will provide “a valuable new indoor experience for our campus community and the public through collaboration with the Preston Health and Activities Center.”

During the WKU football team’s last practice of fall camp, Head Coach Jeff Brohm was able to comment on the upcoming construction of the new facility.

“We’re fired up about it,” Brohm said. “When you get an indoor facility that looks like that, that can allow you to do so many things. It’s a huge asset. It’ll benefit all sports and all students and it’ll be a tremendous asset for recruits.

“Hopefully we can build a team here that can get to bowl games every year and when it gets to that time of the year, you have access to an indoor facility,” Brohm said. “Not many teams in our conference have one. I think this one will be an extremely valuable resource.”

Not only will the football team be one of the only teams in Conference USA that houses an indoor practice facility, but it also puts WKU with the University of Louisville and the University of Kentucky as schools in the state with such a facility.

Redshirt senior running back Anthony Wales was also able to comment on the new facility after the team’s practice on Saturday.

“It’s pretty nice,” Wales said. “I know the coaches are going to be really happy about it because they won’t have to cancel practice because of the rain or if it’s too cold. I can’t wait to see what it looks like.

“It just feels good because I know that somewhere along that line, I’m a part of the reason why we’re getting that stuff, so it’s just great to see the facilities and the stuff on campus improving since I got here as a student and as an athlete. It’s something you always want to see.”