Ferby, Wales look to lead offense in 2016 with “thunder and lightning” 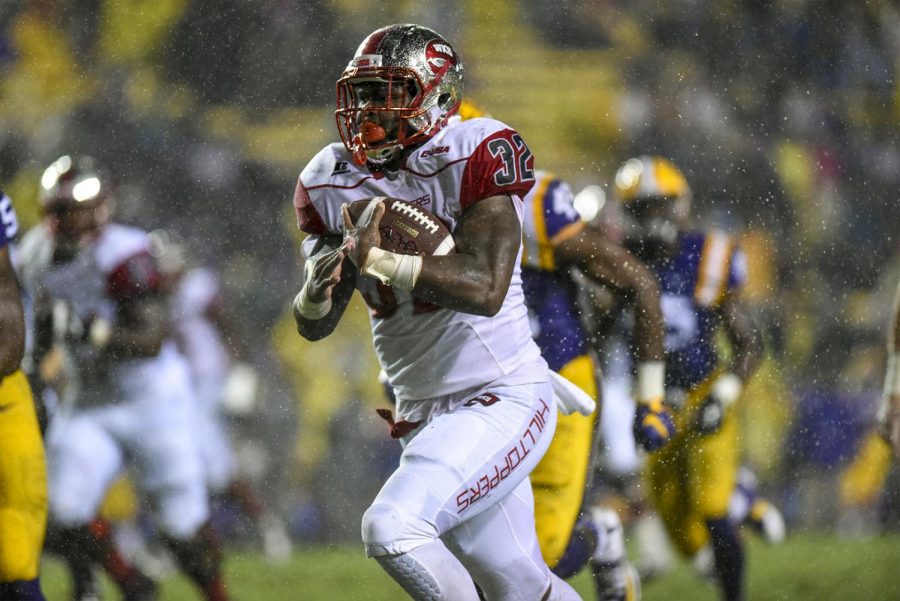 WKU's running back D'Andre Ferby, 32, runs the ball during the Hilltopper's 48-20 loss to LSU on Saturday at Tiger Stadium in Baton Rouge, La.

This fall, a new quarterback will take over under center for the WKU football team. While a new inexperienced face will lead the offense, life won’t be so difficult for him thanks to some crucial returnees in the back field.

Redshirt sophomore running back D’Andre Ferby and redshirt senior running back Anthony “Ace” Wales will team together to carry the load of the offense at the start of the season for the Hilltoppers.

Ferby’s physical and tough running style helped him earn Conference-USA All-Freshman team honors last season as he powered his way across the goal line 11 times last season – the third most touchdowns scored by a freshman running back in the country.

In contrast, Wales utilized his top-end speed last season to average 7.04 yards a carry which was the fifth-best average in C-USA history.

Despite their difference in running styles, Wales and Ferby are close friends, because for them opposites do attract.

“I like it,” Ferby said of their relationship. “There are a lot of running back duos around the nation who probably say they are thunder and lightning, but I feel we are the true thunder and lighting. Ace is a 4.3 guy who is fast and has speed. Me going downhill in the fourth quarter when team’s get tired of chasing Ace is when I get my glory and I do what I do.”

“We go out there and it’s like thunder and lighting, and without lighting there is no thunder,” Wales said. “It’s just a bond that we have so we can go out there and help our team win games.”

Success wasn’t so easy for either running back to come by, however. Wales first saw his big break last season when now redshirt senior running back Leon Allen fell to injury in WKU’s second game against Louisiana Tech.

Ever since the injury, Head Coach Jeff Brohm turned to Ferby and Wales to carry the load on the ground as Ferby notched 164 carries last season while Wales rushed 155 times.

“When Leon went down, we had some concerns if that position would be able to play to that level, but Ace Wales and D’Andre Ferby both stepped up and played extremely well,” Brohm said. “They are very confident right now. Our running game I feel good about.”

During the team’s media day on Wednesday, Brohm acknowledged the learning curve the new quarterback will face as he said the team “will probably have to manage” shots down the field.

The play-making ability of Wales and Ferby will be an aspect that will certainly be utilized by Coach Brohm early in the season.

“We like the progress of Ace Wales,” Brohm said. “He is elusive, he has got speed, he is very confident and he can make some big plays for us. He has worked hard and he knows he is a leader for us.”

“D’Andre Ferby has stepped in and he is physical,” Brohm said. “He gives a different element at running back. He really works extremely hard – even harder than I thought he would coming from Nashville and being Mr. Football. We are very confident in those guys.”

Despite their competitive nature, the duo does not let playing time affect their relationship on and off the field.

“The beauty between us two is that we are not selfish at all,” Ferby said. “If Ace is getting ten yards a carry in a game, then he will get the majority of carries in the game and vice versa. We just aren’t selfish about it. We just want to do what’s best for the team.”

“Me and D’Andre are the best of friends,” Wales said. “That’s like my little brother. Ever since he came here I’ve tried to bring him under my wing just to help him develop as a college player and as a college student. It’s not really about who shines most at the position. I’m going to make him better and he makes me better.”

“Last year I played around 244 (pounds) and I wasn’t as explosive as I wanted to be,” Ferby said. “I think I left too many plays out there – plays that went for four yards that should’ve went for 15 yards. I’m now down to 230. I feel like since getting my weight under control I can be more elusive than I was last year.”

“I know that I’m speedy back, but I want teams to really start to feel me,” Wales said. “I just want to go out there and give 110 percent every play. This is my senior year and this is my last go around so I just want to give it my all.”

Despite the Hilltoppers flashy offense which looks to win games through the air, expect to see WKU’s “thunder and lightning” early and often in the season’s opening game on Sept. 1 against the Rice University Owls.