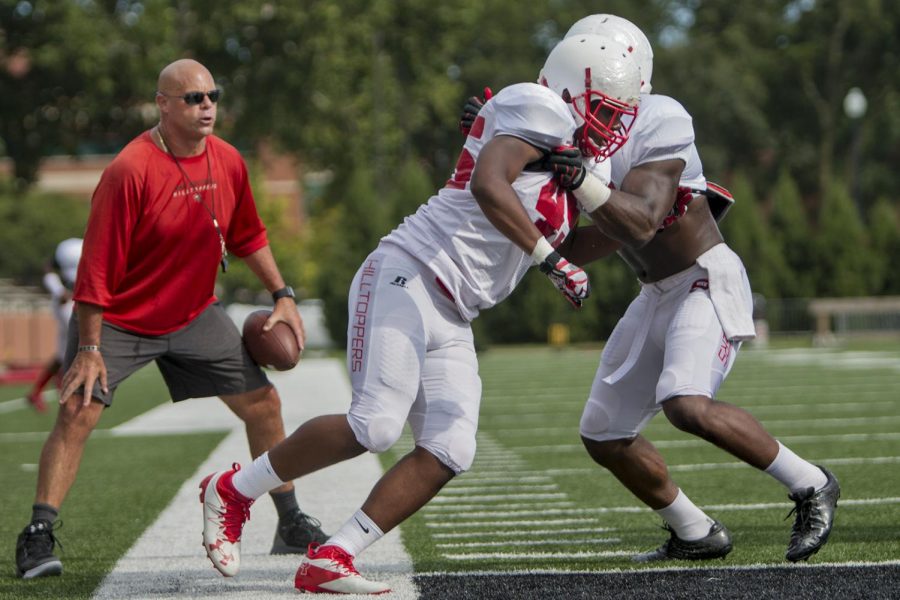 Part of the reason why the 2015 WKU football season will be remembered as a breakthrough season for Jeff Brohm’s program will be because of the opportunities created by the team’s schedule.

By scheduling tough non-conference games with teams like Vanderbilt, Indiana and LSU, the Hilltoppers were able to compete against power conference talent and gain invaluable experience and confidence. The 2016 non-conference schedule provides many of the same opportunities.

Opening a season with an SEC victory on the road can be huge for a team’s confidence, and the Hilltoppers carried a bevy of momentum into the rest of the season with a 14-12 road victory over Vanderbilt in the first game of the 2015 season.

This season, WKU will have a chance to claim a second consecutive victory over the Commodores at home in L.T. Smith Stadium on Saturday, Sept. 24.

In last year’s contest, Tyler Higbee’s four catches for 102 yards accounted for almost half of the Hilltoppers’ passing offense. The outcome came down to a failed two-point conversion on the one-yard line when WKU junior defensive back Joe Brown stopped Vanderbilt’s Nathan Marcus from tying the game.

Vanderbilt will return a majority of the players from its stout defense from a season ago, including a deep defensive line that features returners Nifae Lealao, Jay Woods and Adam Butler.

The rematch this season is less likely to be such a defensive struggle as it was when the Tops and Commodores went at it a year ago. Second-year Vanderbilt head coach Derek Mason is getting a lot back on offense, including his leading receiver Trent Sherfield and experienced quarterback Kyle Shurmur.

WKU also gets its leading receiver back in Biletnikoff Award watch list member Taywan Taylor along with redshirt senior running back Anthony Wales and redshirt sophomore D’Andre Ferby holding down the backfield.

While it isn’t the first game of the season, this year’s matchup comes at an important stretch on the schedule. If WKU were to win two of its three first games, a third win over Vanderbilt could have major bowl selection implications further down the line.

Scheduling an SEC team can only be beneficial, but scheduling two SEC teams including the reigning national champions is a boost for a program. After the home opener against Rice on Sept. 1, WKU will have an extra two days to prepare for a Sept. 2 meeting with the Alabama Crimson Tide.

The Hilltoppers’ valiant effort in a 48-20 loss to LSU in Baton Rouge last October is the best parallel for what this year’s trip to Tuscaloosa could be like.

After opening on the road at USC, Alabama will host the Hilltoppers in its home opener in Bryant-Denny Stadium before heading to Oxford, Mississippi for a revenge game against Ole Miss the following week.

Regardless of the hype, or lack thereof, entering the game, WKU was involved in a similar situation at LSU a season ago. Scheduled in between Florida and Alabama, the Hilltoppers hung around with LSU until the third quarter when the Tigers rattled off 17 straight points to open up a 34-13 lead.

Going into an environment with annual national championship expectations is a tall order, but it allows WKU a great opportunity to gain experience.

A football team’s potential for on-field success is made possible in part through scheduling. Adding multiple games against opponents from arguably the best conference in college football can only increase that potential, and that’s what WKU has done in 2016.