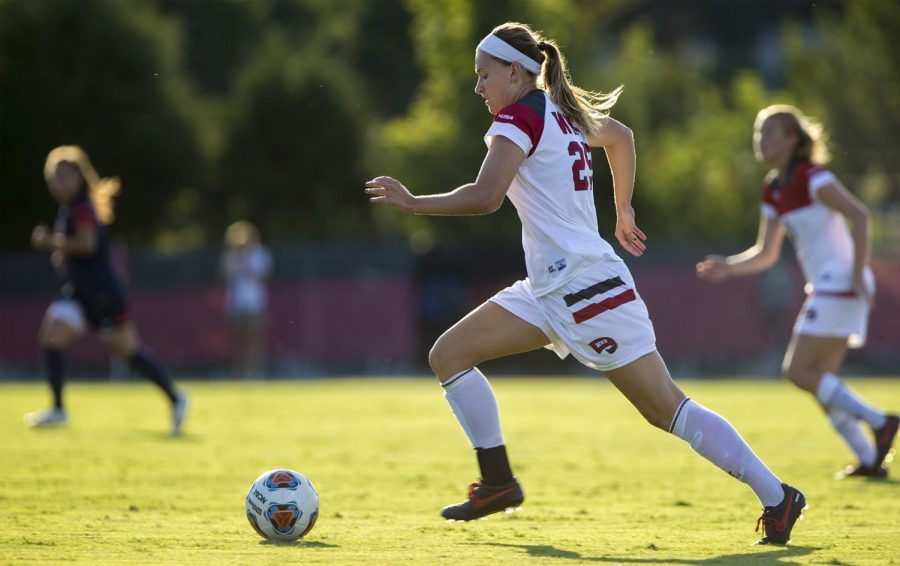 WKU's defender Makenzie Costner (25) drives the ball down the field during the Lady Topper's 3-1 win over University of Tennessee - Martin on Aug. 21, 2015, at the WKU Soccer Complex. William Kolb/HERALD

After playing its first two regular-season matches on the road, the WKU women’s soccer team will head away again for a quick contest in Oxford, Ohio against the University of Miami at Ohio on Friday at 3 p.m.

The Lady Toppers (1-1), who kicked their 2016 campaign off with a dominating 7-1 victory at the University of Tennessee at Martin on Friday, are coming off a 2-0 loss to the University of Memphis Tigers on Sunday.

The RedHawks, who are off to an 0-2 start on the year after suffering back-to-back home defeats to the University of Vanderbilt (2-1 loss in OT on Friday) and the University of Evansville (2-0 loss on Sunday) will be searching for their first win while WKU will be looking to keep its momentum going.

Against the Skyhawks, the Lady Toppers reached several heights and recorded a major milestone. The team’s seven goals were the most scored in a single match since 2002, and redshirt sophomore midfielder Sarah Gorham’s goal just three minutes into the match would be the program’s 500th total goal.

In the Lady Toppers’ meeting with Memphis, junior goalkeeper Allison Leone was able to save 10 shots from going in — just one shy of her career high.

Miami, on the other hand, has yet to get things going offensively so far on the season. The RedHawks have only be able to score one goal in two matches and currently sit in last place in the Mid-American Conference East Division.

Although WKU’s opponent hasn’t been able to put all the pieces together quite yet, the team has a couple of solid players to keep an eye on: sophomore forward Courtney Evans and the goalkeeper Vic Maniaci. Evans has scored Miami’s only goal of the year while Maniaci has recorded nine saves and has a save percentage of .818.

Sunday’s match will be the second meeting between the two programs. In 2015, WKU dropped a 4-0 decision to the RedHawks in Oxford.

It was a match where the Lady Toppers’ sophomore and at-the-time forward Hannah Cady attempted a shot at the third-minute mark, but junior Vic Maniaci was there for the save.

Her save motivated the home club to go on and find the back of the net four times in a victory that moved the Lady Toppers to a 1-1 mark to begin the year.

After battling with the RedHawks, the Lady Toppers will return home and have a week off from games before hosting four straight matches at the WKU Soccer Complex.