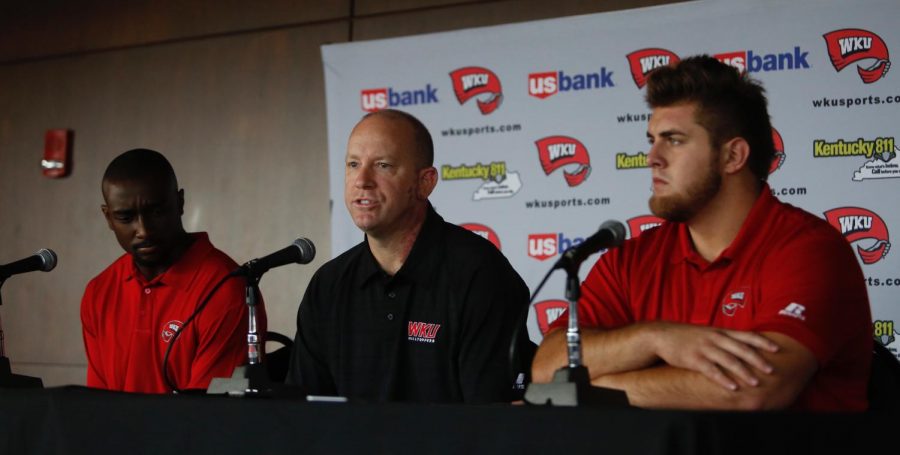 With a new season comes a new set of challenges.

This could not be any truer for the 2016-17 WKU football team as they look to replace one of the best quarterbacks in school history while also restructuring a defense that saw several key players leave due to graduation.

During the team’s media day on Wednesday morning, Head Coach Jeff Brohm and senior captains Marcus Ward and Forrest Lamp embraced these challenges as they addressed the media.

“We are looking forward to the challenges – it will be a challenging season,” Brohm said. “We have a few key pieces of the puzzle that need to be replaced. Ever since the last season ended, through the winter to the spring to the summer we have worked extremely hard to prepare those guys for the opportunity when it comes.”

With the graduation of quarterback Brandon Doughty, Coach Brohm and the rest of the team will have to turn to a new face behind center. A face that Brohm says will be determined within “the first seven-to-ten days” of fall camp.

“Mike White is a guy that has played in his previous stop, and he has not played in our offense,” Brohm said. “He knows the offense a little better than the others. He can throw the ball accurately, but we want him to be a leader and develop toughness.”

“Tyler Ferguson is a guy in the mix, but he has to prove that he can be consistent and anticipate and deliver throws all time,” Brohm said. “I think all four have different elements that need to be worked on, but they have worked extremely hard up to this point.”

With the arrival of a new quarterback combined with the departures of the team’s top tight ends last year, Brohm said that “we have our work cut out for us”. However, even with an unproven quarterback, Brohm expects the offense to be just as aggressive as it was last season.

Another challenge for the Hilltoppers will be trying to improve on the defensive side of the ball while only returning four starters from last season. For Ward, one area on defensive he views as a strength is in the secondary.

“There is leadership back there from guys that have been here a while like myself and Brandon Leston,” Ward said. “I’ve been here four years and this group right here is a group that I look forward to getting the job done this year. It’s a new team, and we have a lot of hungry guys that are ready to step up. We are kind of turning the page in a way.”

Defensively, the Hilltoppers improved last year which was one of the reasons the team’s record improved from 8-5 to 12-2. However, Brohm said that he wants to continue to raise the level of the defense despite the losses on that side of the ball.

“I think our defense has more experience than you think,” Brohm said. “We lost a lot of starters but we played a lot of guys so I feel confident. We have a lot of guys that are eager to shine.”

Despite the challenges, the team poses some very formidable strengths this season. For Coach Brohm the biggest strength of those is the offensive line which returns all five starters this season.

“We have a veteran offensive line, guys like Forrest Lamp and some others who have played a lot of games,” Brohm said. “In my opinion they are the strength of our football team.”

Lamp is the only returning captain from last season’s team as the Venice, Fla., native will look to be one of the biggest leaders on this year’s team.

“Last year with me being a captain, there was five other guys who were captains who were seniors and I was kind of on the backburner watching them and seeing how they took control of the team,” Lamp said. “If I do need to step up and say something, I will be more than happy too.”

The Hilltoppers will also return a plethora of offensive playmakers as the likes of senior wide receiver Taywan Taylor and senior running back Anthony Wales will look to continue to make big plays this season as they both recorded over 1,000 yards of total offense last season.

Even with a large bullseye on their backs after finishing ranked in the AP top-25 for the first time in school history last season, the Hilltoppers will continue to keep things simple despite high expectations.

“We come to work every day trying to be as hungry as we can,” Brohm said. “If you can do that each and every day then when the big games come, you are able to relax because you know you put in all the time and effort. It’s a one game season always.”

“I like the nucleus of the team,” Brohm said. “We got to earn our respect and that’s been our mantra. This is a new team. We lost some key players and there are some people out there that don’t think we are going to be as good. So it’s up to the guys on this team to prove that they were a reason for that success. I think our guys are motivated.”

The Hilltoppers will start their season off on Sep. 1 in their first C-USA game of the season at Houchens-Smith Stadium against the Rice University Owls. Kickoff is currently scheduled for 7:00 p.m.