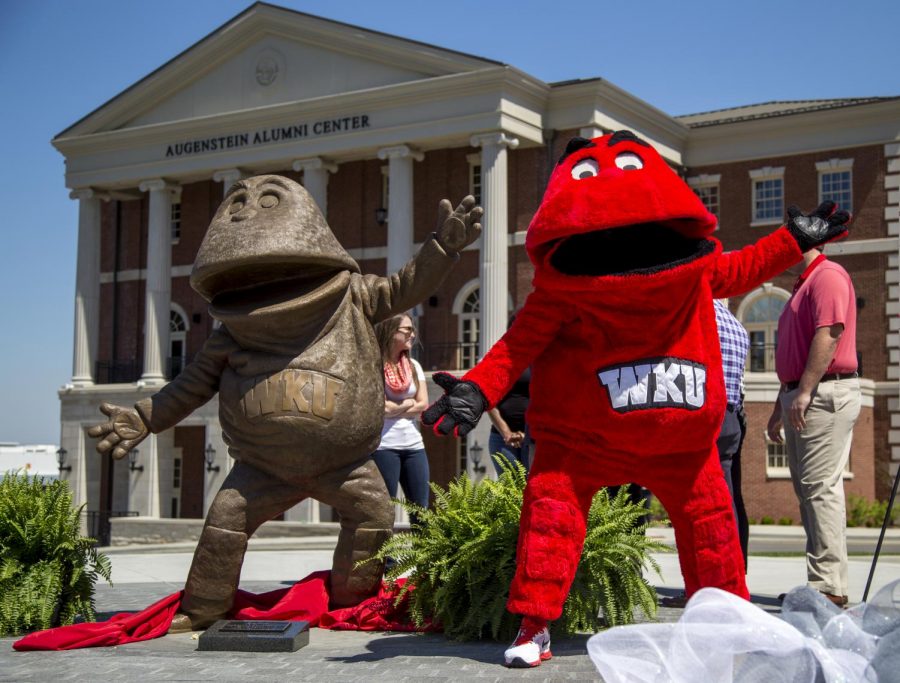 Big Red poses during the unveiling of the new Big Red statue outside of the Augenstein Alumni Center on Saturday. (Mike Clark/HERALD)

WKU received its highest annual total ever in private gifts last year as $23.1 million was given to the university. The total is a 22 percent increase from the previous record of $18.9 million.

Marc Archambault, vice president for development and alumni relations, said that around 45 percent of the gifts came from “friends to the university which are not alumni.”

“It’s the highest total ever of gifts from friends to the university – that’s pretty exciting,” Archambault said in an interview with the College Heights Herald. “As much as we value our gifts from alumni, and they represented a pretty big part of this donor poll and we count on them, we also are appealing to people who aren’t even affiliated with the university. It means the university is doing a great job and people are realizing it.”

Archambault said that 24 percent of the gifts came from corporations due to the university’s partnerships with industry and only 15 percent came from alumni of the school.

However, Archambault is optimistic about future funding from alumni.

“Only a small number of our alumni body is mature enough in their lives and careers to be making large gifts,” Archambault said. “Of our 14,000 donors of this past fiscal year 8,400 were alumni. That I think tells us some exciting, positive things.”

Other areas of WKU saw a record amount of gifts this year which were the College Heights Foundation, student financial aid, endowment and the Hilltopper Athletic Foundation.

This past fiscal year also saw the highest total for the university ever in gifts that were in cash, which Archambault said “helps the university immediately while deferred gifts take time to arrive.”

For Archambault, the reasons why this year was so successful with such high generosity is because of the “great academic programs here at Western and athletics as well which has really gotten a lot of attention.”

“I think part of it was just the excitement of WKU and the great things it’s doing,” Archambault said. “The bottom line is that Western is doing a fantastic job with educating students and being part of the community in a positive way.”

Archambault said that as of right now, a fundraising goal has not been set for this fiscal year. However, one of the alumni association’s objectives is to “have a higher total every year.”

“It’s not always possible, because it might just be the luck of the draw of how individual gifts come in and they come in and how they land,” Archambault said. “No goal yet for this year but we certainly do aspire to find a way to beat this total.”