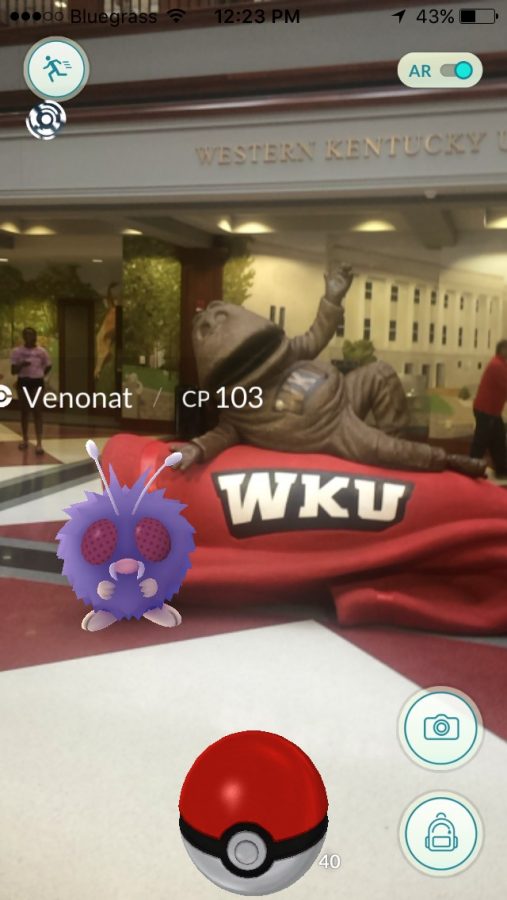 Scottsville, Ky. senior, Cameron Cantu had never been in a fight on the campus of WKU before.

Since last Wednesday, Cantu has been getting into fights on campus regularly. However, they aren’t the kind of fights you are probably thinking of.

Thanks to the release of the new game called “Pokemon Go” which is available for iPhone and Android users, Cantu and many other players have been fighting their Pokemon at one of three virtual Pokemon gyms located on WKU’s campus.

Since its release, the game has been nothing short of a pop culture phenomenon as the stock of Nintendo has risen 60 percent, according to CNN.

The game has had a similar social effect on campus as anywhere from 75-100 people can be found walking campus at night when it’s less hot to try and find Pokemon.

“I love it because it takes me back to my childhood and just breathing Pokemon,” Cantu said. “I think it brings everyone a lot closer together because they can all relate to this one thing. It connects everyone together in a good way.”

By using GPS tracking technology and augmented reality, these virtual gyms appear at specific locations on campus through the use of a camera found on cell phones of players.

In order to win fights at gyms, players must strengthen their Pokemon by actually going outside and capturing as many of the famous creatures as they can.

Different from previous Pokemon games found on other gaming consoles, users of “Pokemon Go” must go outside and spend a large amount of time walking around to find rare and powerful Pokemon so that they can level up faster than other players.

At a certain point in the game, players can choose to be on one of three different teams: Team Valor which is the red team, Team Mystic which is the blue team and the yellow team which is called Team Instinct.

Once a player defeats other trainers at a gym, the team they’re on then takes over that gym.

The more players walk around, the more Pokemon they will find. This gives them the opportunity to take over gyms for their respective teams.

Playing the game on the campus of WKU gives gamers a literal tour of campus and its many important landmarks.

In order to catch Pokemon in the game, users must have Poke Balls which they only can get at what the game calls “Pokestops.”

These stops are located at notable landmarks and they give players different kinds of items, like Poke Balls, to help them catch more Pokemon.

“It’s pretty cool because it gives you the historical background on the landmark,” Cantu said. “When you click on the Pokestop, it gives you a whole paragraph on what the stop means.”

One aspect of the game which has impacted interactivity between people on campus is the item which is called a lure module.

Once used, Pokemon are attracted to where the module is used. Lure modules can only be used at Pokestops. This means that whenever there is a module activated, several groups of people can normally be found sitting around a well-known location on campus waiting for a rare Pokemon to show up.

“I think it’s really cool how you can get met a lot of people at a Pokestop because you get to see people that you really didn’t think were big fans of Pokemon,” Glasgow, Ky., sophomore Alex Sergent said. “Everyone has the common goal and it brings people together in a new way.’

Sergent also mentioned that he thinks the game is so popular because users don’t have to walk around playing the game on a Gameboy or a Nintendo DS.

He said that playing on your phone, “makes you look like everyone else.”

“I was playing downtown the other night and I saw a lot of old people, young children and people our age playing it, so I think it kind of does bring down the stigma that Pokemon is just for nerds,” Sergent said. “Everyone is going out and having a fun time and I think that this is introducing Pokemon to a lot of people because it is such a big fad socially.”

While the game has become a pop culture phenomenon in a matter of days, it still features some negative aspects as the game’s servers crash often due to so many people playing at once.

“Obviously, it’s a new app so there have been some connectivity issues and they are clearly working on that,” Owensboro Ky., senior Shaun Goebel said. “Of course there is problems that lie with not really paying attention with your surroundings. It also can hinder people’s ability to drive. It drains your battery pretty quickly as well.”

Despite its negative aspects, Goebel believes that the game is here to stay and that the campus at WKU is better for it.

“The release of the game has brought everyone out and it makes campus that much better because everyone is interacting with one another in a very friendly manner,” Goebel said. “You are making friends with the most unlikely sorts of people.”