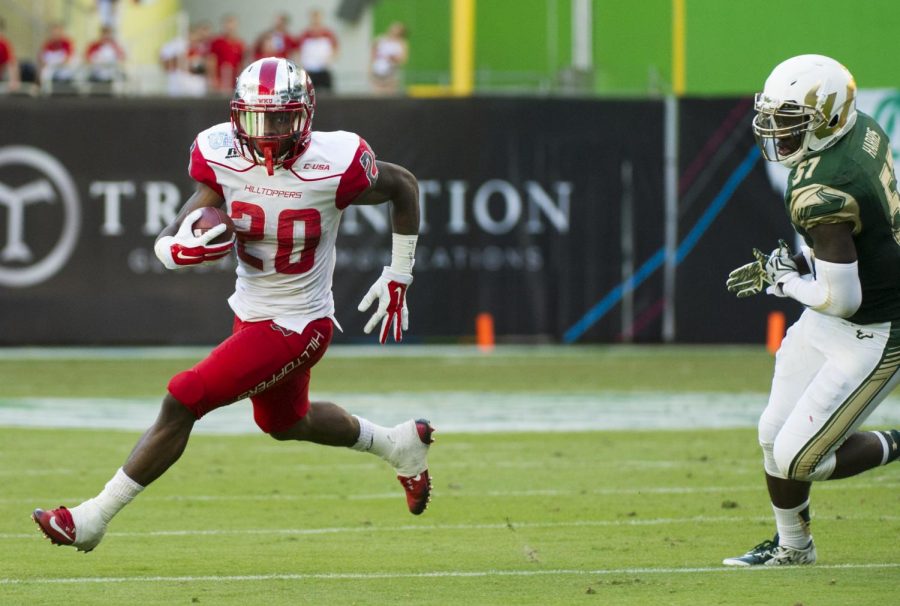 December 21, 2015: Western Kentucky running back Anthony Wales (20) carries the ball past South Florida linebacker Nigel Harris (57) during the first half of the Miami Beach Bowl at Marlins Park in Miami, Florida, on Monday, Dec. 21, 2015. Nick Wagner/HERALD

Rising redshirt senior running back Anthony Wales and rising redshirt sophomore D’Andre Ferby were both named to the 2016 Doak Walker Award Watch List on Thursday as announced by the PwC SMU Athletic Forum.

The Doak Walker award is college football’s award for the nation’s premier running back as Wales and Ferby helped to lead WKU in rushing yards last season.

The duo were two of four Conference-USA players and two of 76 total representatives on the watch list as WKU was one of just three non-power five schools to have multiple members.

The Hilltoppers have now had a running back represented on the Doak Walker Award preseason watch list in five of the past six seasons.

Wales became WKU’s sixth-consecutive 1,000-yard rusher last season. He tallied 1,091 yards on 155 carries as he was named Second Team All-C-USA, while his .704 yard per carry average was the fifth-best in C-USA history.

Wales had 100-yards or more on the ground in seven of his nine full games of action, including six-straight against C-USA opponents, to become only the sixth running back in league history to hit that mark.

Ferby finished his rookie campaign with C-USA All-Freshman honors as he ran for 650 yards on 164 carries with 11 touchdowns, the third-most among freshmen running backs in the country.

The PwC SMU Athletic Forum Board of Directors will name 10 Doak Walker semifinalists on Nov. 16, and the Doak Walker Award National Selection Committee will cast votes to determine three finalists, who will be announced on Nov. 22.

The recipient of the 2016 Doak Walker Award will be announced live on The Home Depot College Football Awards on Thursday, Dec. 8.