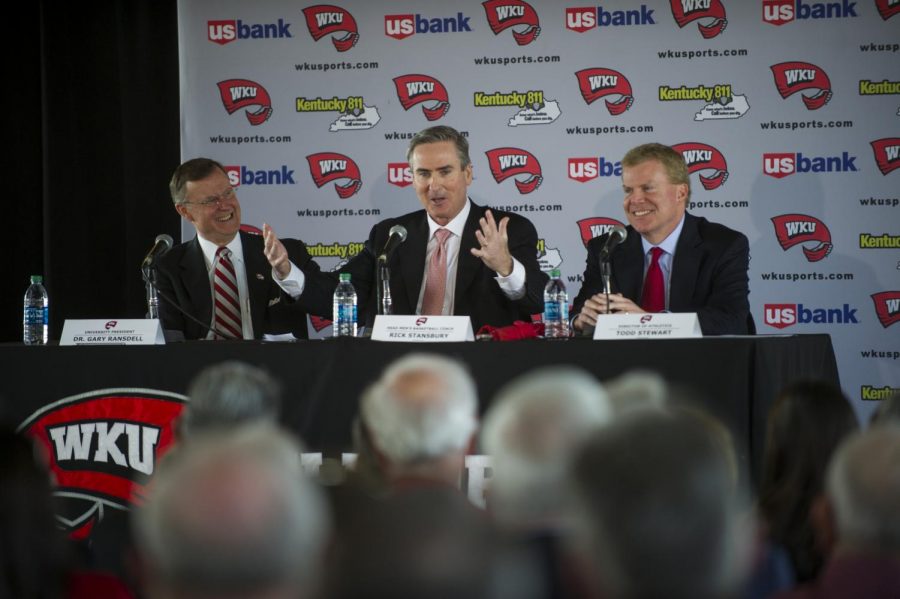 First-year Head Coach Rick Stansbury had his hands full when he arrived on the Hill in late March. The backcourt was depleted. There were no returning scholarship guards. There was nobody to run the point guard position.

“There was zero one’s, two’s and threes in the program, zero,” Stansbury said. “What we got here is a desperate need for perimeter guys.”

However, the veteran coach who previously worked as an assistant coach at Texas A&M went to work immediately.

With a limited time period to recruit, it seemed easy to take the quick route of tapping into the junior-college talent pool to bring players to WKU.

However, the patience exhibited by Stansbury paid off as he chose other methods to bring in players.

Graduate transfers in recent years across the NCAA have made a major impact at their new schools. The Tops witnessed that first-hand this past season with Aaron Cosby, a fifth-year senior from University of Illinois at Urbana–Champaign.

Cosby finished his final season as the second-leading scorer on the team with 13.7 points per game.

“It was easy to come in here and grab a few players, but I wanted to be patient, I thought fifth year guys, and finding the right ones that fit our needs and give us a chance to compete,” Stansbury said.

Two fifth-year players will join the Tops on the court for the 2016-2017-basketball season: Junior Lomomba and Que Johnson.

Lomomba played last season at Providence College alongside a likely lottery pick in the upcoming NBA draft, Kris Dunn. Johnson is transferring from Washington State University out of the Pac-12 conference where he was the third leading scorer for the Cougars last season.

“Lomomba, he’s from Montreal Canada,” Stansbury said. “He went to Providence, that was a top-five team at one time last year.”

Stansbury saw a lot of upside in the big guard even if Lomomba’s statistics last year at Providence might not jump out off the stat sheet, as he only averaged 5.3 point a game and 2.5 rebounds a game.

However, there is some reasoning behind that as he played alongside two players who combined to score 37.5 points per game.

“He only shot four times a game. Well, Michael Jordan couldn’t have scored many points shooting four times a game,” Stansbury said. “He was their glue guy, a great defender. He’s a high quality kid, really good student, will be a guy that character-wise as a person I will trust immediately.”

Johnson, on the other hand, is a known scorer, which made him a player that immediately caught the attention of the WKU coaching staff.

“He’s a guy I pinpointed as soon as I got the job,” Stansbury said. “I was trying to get guys that will give us a chance to compete. He (Johnson) averaged 11.5 points per game at Washington State and you know, a scorer can score.”

“If he can score there, he can score here,” Stansbury said. “I see those abilities and I’ve seen a lot more ability than that. He’s a guy I think that can score buckets multiple ways. He gets off the bounce good.“I feel good about those guys out there on the perimeter.”

Incoming freshmen will likely also play a major role on this year’s team.

T.J Howard, a six-foot-one freshman combo guard from DME Academy, will bring some much needed energy and athleticism to the team.

“He’s a high quality kid, has a great family,” Stansbury said. “He’s a guy that plays multiple positions. I think the one thing that stands out about him: he can make shots, guy that can make shots there’s a premium for that.”

“He has a nice body; he’s a kid that’s in school already,” Stansbury said. “He’s a kid that couldn’t wait to get here. He’s a gym rat. I love that about him.”

Coach Stansbury also dipped into international waters this offseason as he brought in forward “Marty” Matineng-iakah from Australia to help fill some holes. He averaged 24 points and 10 rebounds per game for the Ipswich Grammar School.

“He (Marty) played for Papau New Guinea’s national team, I liked him,” Stansbury said. “There’s one thing pretty consistent with him, he can shoot the basketball. He’s played with men; he’s not a little kid coming in here. He’s got some physical-ness about him.”

The other class of 2016 player headed to the Hill is Damari Parris. The six-foot-one guard played last season at Evelyn Mack Academy.

The proven scorer had some big scoring performances against well-known opponents in his high school career. Parris averaged 25 points per game his senior season.

“He’s (Damari) a point guard for sure,” Stansbury said. “He’s got some stuff about him that you can’t teach. He had another gear about him quickness wise. He seems to find ways to score. You know he put 38 on Oak Hill and 34 on Hargrave (Military Academy). Just the ability to do that, you’re doing something right.”

Parris fills the absence of a true point guard that can bring the ball up the floor.

“I wanted to make sure I had a guy that could bring it up the court,” Stansbury said. “There was immediate needs for guys on the perimeter.”

Stansbury is excited about the returning players as well. The core group of big men for WKU has proven to be talented in more ways than one.

Junior forward Justin Johnson has had success in the low post working for points as he led the team in scoring last season.

Coach Stansbury has already made strides with Johnson to improve his game outside of the low post.

Senior forward Ben Lawson may play a larger role than he did in last season’s campaign.

“His (Lawson’s) strengths is he can run, he can jump and he can make a shot.,” Stansbury said. “Let’s put him in situations so we can utilize who he is. He hasn’t done anything but impress me. He’s a guy that can pick and pop. His abilities are quickness and athleticism. So I like who he is.”

Stansbury is putting together a team that he hopes will be ready to compete in Conference-USA. With a winning pedigree as a coach, Stansbury wants to win now and not waste any time trying to rebuild slowly.

“We’re going to put our best players on the floor, make them fit the best and give us our best chance to compete and win,” Stansbury said.