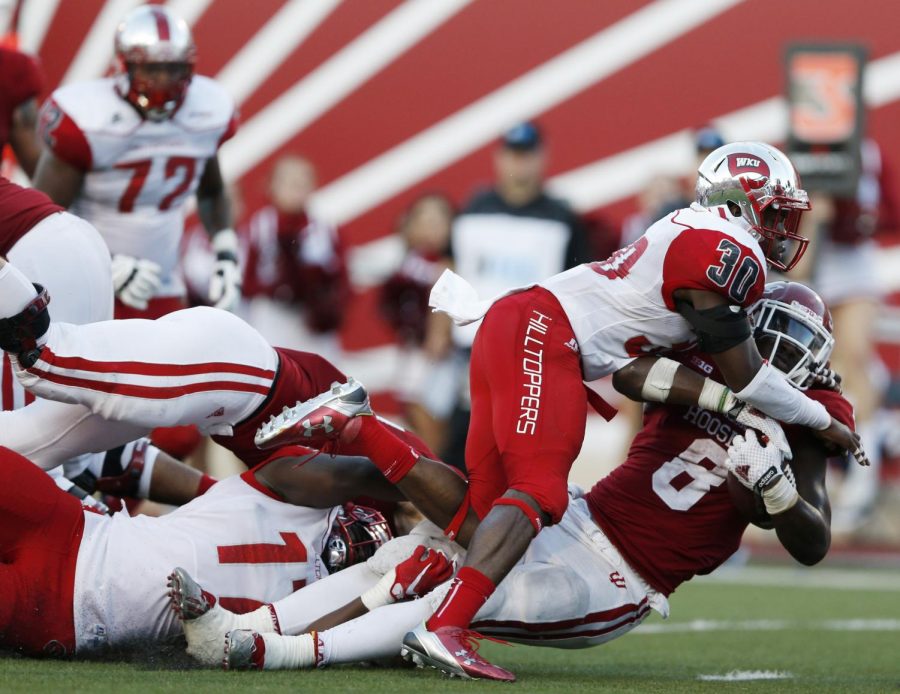 Western Kentucky defensive back Prince Charles Iworah (30) attempts to bring down Indiana running back Jordan Howard (8) during a NCAA game at Memorial Field on September 19, 2015 in Bloomington,Indiana. Michael Noble Jr./HERALD

The WKU football program followed up arguably the most successful season in its history on the biggest of stages on Saturday. A program record-tying three players heard their names called in the third day of the 2016 NFL Draft.

Higbee was the fourth tight end off the board as the Los Angeles Rams made the WKU standout the 110th overall pick in the fourth round.

Higbee started eight of the nine games he appeared in during an injury-riddled 2015 season for the Clearwater, Florida, native. Higbee’s 6-foot-4, 243-pound frame and impressive stat line through nine games — 38 receptions for 563 yards and eight touchdowns — helped make him the highest draft pick in WKU history.

“As a pass-catching tight end, he’s as good as it gets,” draft analyst Mel Kiper Jr. said during ESPN’s broadcast. “With his size, he’s got huge hands, [and] he’s got to improve as a blocker, but this kid was on fire catching the ball.”

Higbee steps onto a Rams roster alongside No. 1 overall pick Jared Goff out of the University of California.

Goff is expected to compete for the starting quarterback position in Los Angeles, and Higbee will be vying for a starting spot as well.

Despite being the first offensive player drafted from WKU since 2003, some questions about Higbee’s character loomed due to a recent arrest, causing him to fall in the draft.

“He would’ve been a second-day pick had it not been for a recent incident off the field,” draft analyst Todd McShay said during ESPN’s broadcast. “He led the FBS for tight ends in catches and receiving yards and touchdowns before he hurt his knee against North Texas. So you’ve got durability issues [and] character issues, but this guy can play. Even before this incident, everyone has known around the scouting community that this guy enjoys the nightlife and he’s got some growing up to do. But if he does grow up and mature, he’s got a chance to be really, really good.”

The man credited for throwing all the passes Higbee caught was the next former Hilltopper to be selected in the seventh round. With the 223rd overall pick, the Miami Dolphins picked quarterback Brandon Doughty, making him the 15th and final quarterback selected in the draft.

Listed at 6-foot-3, Doughty will have to compete for a roster spot with veterans Matt Moore and Logan Thomas behind starter Ryan Tannehill.

“You look at Brandon Doughty, [and] you look at the limitations,” Kiper said. “He doesn’t have the big arm. He’s a kid who will battle — he’s a fighter out there — but does he have enough arm strength to get it done in the NFL and get it into the tight windows? As a backup or third quarterback, maybe he has a chance to stick on an NFL roster.”

Doughty has dealt with less-than-desirable physical attributes for his whole football life, and they have yet to deter him.

“He had the most attempts of any FBS quarterback the past two seasons,” McShay said. “This guy played in a pass-happy offense. The ball comes off his hand smoothly, and he throws a crisp ball. He’s an interesting developmental late- round prospect.”

The third and final player to be selected from WKU was perhaps the most unlikely of all heading into the season last August.

Iworah, a former track sprinter turned walk-on running back, is now an NFL cornerback after being selected with the 249th overall pick by the San Francisco 49ers.

“Well, he has 4.3 speed. That’s how he comes across,” 49ers general manager Trent Baalke said in a postdraft press conference. “He’ll come in here like the rest of them and really compete. He has blue traits in his body … run, jump, change direction — physically, [he] can do all those things.”

Iworah ran a 4.32 40-yard dash, posted a 38 1/2-inch vertical jump and recorded 25 reps on a 225-pound bench press at the WKU Pro Day in March. Iworah started for two years in the Toppers’ secondary and finished his senior season with 15 pass breakups, the fourth-most in C-USA play last season. He finished his collegiate career with 91 total tackles and 3.5 for loss, five interceptions and 21 pass breakups.

“We went through the school,” Baalke said. “It’s not like we didn’t know about this kid. Each time we saw him, he impressed us. We went to the school in the fall, liked what we saw. He showed up at the all-star game, had a heck of an all-star game, wasn’t invited to the Combine, and had a Pro Day. He stood out at his Pro Day. At every step, he stood out.”

Linebacker Nick Holt also has a chance to make the league as he was invited to Seattle Seahawks’ rookie camp.

The last time WKU had three draft picks, the draft was 17 rounds long and 442 picks deep; Richard Nixon was the president of the United States.

While Saturday proved to be a great day for several former Hilltoppers, their journeys have all just begun, and they will have to make their respected rosters next.