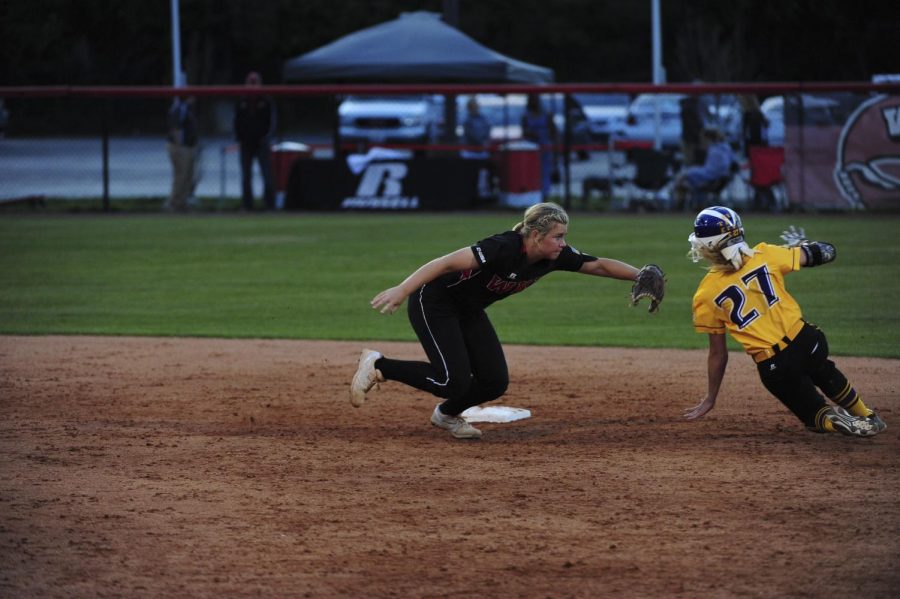 Sophomore infielder Carleigh Chaumont reaches to tag out a Tennessee Tech baserunner during a softball game at the WKU Softball Complex in Bowling Green, Kentucky, on Wednesday, April 13, 2016. The Hilltoppers took down the Golden Eagles 5-3. Nick Wagner/HERALD

WKU softball traveled to Boca Raton, Florida, where it gave away its three-game series to No. 24 Florida Atlantic University within the first two games.

The first two contests were played on Saturday at the FAU Softball Stadium. The first game was shortened to five innings due to the near-shutout, which FAU won 16-1.

The Lady Toppers fought harder in the second game but still fell short 8-3. This clenched the series win for FAU. By this time, the third match was a formality that ended in a 6-0 shutout.

“I think we were aware that this would be very hard to win, but game two we competed in, which is all I can ask for,” Head Coach Amy Tudor said. “They’re a very good team, very solid offensively, defensively and in the circle.”

The first match started out in WKU’s favor when sophomore Hannah Parker nabbed an RBI single that moved senior Brooke Holloway from second all the way home.

The Owls (44-7, 19-2 C-USA) made their biggest comeback of the series off two hits and two WKU errors to notch six runs in the bottom of the first.

FAU, Conference USA leader, collected an additional 10 runs throughout the next three innings. It also outhit the Lady Toppers 12-2 with Kylee Hanson in the circle. Hanson had six strikeouts from just four innings in the circle, according to WKUsports.com.

“I think they dominated the circle,” Tudor said.

Game two was a full seven-inning match where FAU took the lead from the beginning and held it until the top of the fifth. The Owls scored five runs within the first five innings before the Lady Toppers attempted a rally of three runs off two hits.

Holloway was once again involved in a run with her RBI double, a pair with sophomore Carleigh Chaumont’s RBI double. Together, the two Lady Toppers added the three runs to prevent a shutout and knock the score to 5-3.

The sixth inning was fatal to WKU when FAU posted three additional runs to bring the score 8-5, where it stayed for the remainder of the game. Parker pitched for WKU through the six inning of the second game and allowed only three earned runs with 11 hits and four strikeouts.

Game three took place on the following day and was a repeat of the first two games. Both teams were held scoreless until the third inning. Throughout the third and fourth, FAU scored six runs.

Hanson once again showed her talent in the circle for the Owls when she finished the game after allowing WKU only one hit and taking in her NCAA-best 13th shutout of the year, according to WKUsports.com. This was her fourth one-hitter of the season.

WKU had one hit during the spread of the match from the consistent Holloway, who made it to first base in the first inning. This was Holloway’s third hit of the series against FAU.

“For us, we put ourselves in a very tough position after this weekend to make the Conference USA tournament,” Tudor said.

The Lady Toppers, now 16-28 (7-10 C-USA), will close the regular season at home next weekend in another conference three-game series, this time against Marshall. The matches will take place with one doubleheader beginning at 1 p.m. Saturday and a single game at 11:30 a.m. Sunday.

“A lot of what we do this upcoming weekend and other variables are going to come into play for us to make conference tournament,” Tudor said. “It was a pretty disappointing weekend.”