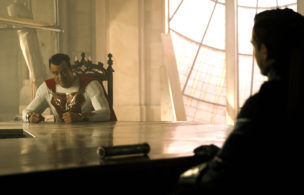 No legend lives forever, but those that follow one have a lot to live up to, as seen in the Jupiter’s Legacy trailer unveiled on April 7.

The new drama (premiering May 7) follows two generations of superheroes: the first generation, who spent nearly a century keeping mankind safe, and their children, who struggle to live up to the public reputations of their parents. “Brandon, Chloe, everything you do is a reflection on this family,” Sheldon/The Utopian (Josh Duhamel) tells his kids (played by Andrew Horton and Elena Kampouris. “You have to be the ideal.”

But as Chloe points out, “no one can live up to the ideal, not even dad.”

While Sheldon may not feel like they have anything to show for their 90 years of keeping the world safe (at the expense of his relationship with his kids, Brandon notes), Walter/Brainwave (Ben Daniels) argues, “we’ve made a difference.” We even get a look at their origin story, on The Island, and what they had to do to earn their powers.

Watch the trailer below for a look at the action, superheroes, a funeral (?!), and more from Jupiter’s Legacy, based on Mark Millar and Frank Quitely’s graphic novels.