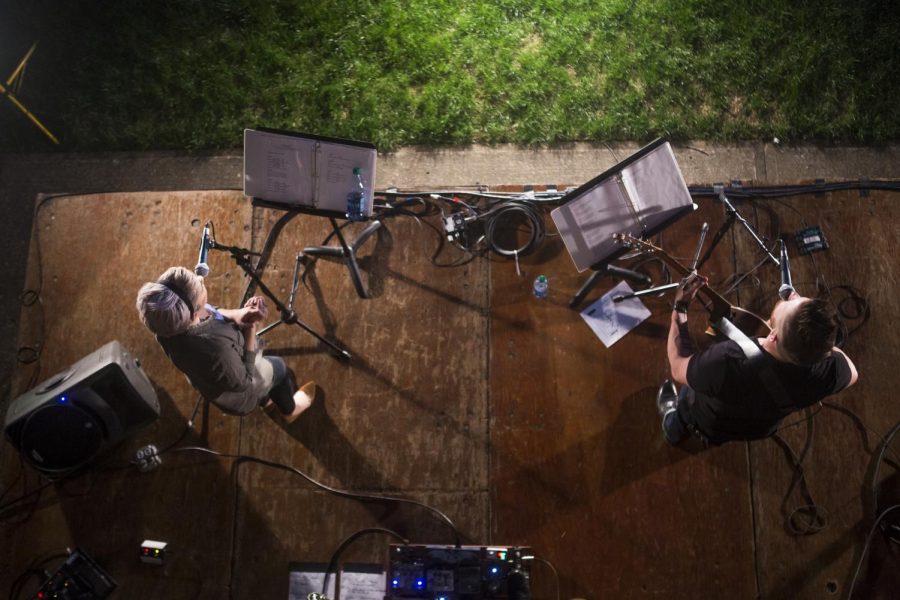 Members of the Crossland Community Church worship band, Lacey Brown (left) and Justin Rivers (right), play at the Unified Worship Night at the colonnade at FAC on monday, April 25. All campus ministries came together for a night of worship outside. Jake Hurdt/HERALD

More than 220 students from at least eight different campus ministries gathered in the Colonnades Monday night to come together in worship.

WKU’s “Unified Worship Night” was the result of collaboration among student leaders, campus ministers and Student Activities and Organizations who had been preparing for the event since fall 2015.

Henderson junior Zach Jones, a member of the Chi Alpha campus ministry, said the goal of this event was to bring believers on campus together to glorify Jesus as one body of Christ.

“We believe that when we come together to worship, it’s a testimony of what heaven will look like — where denominations don’t matter and our gaze is fully set on Christ,” he said.

He said that as the sun began to set, excitement among attendees was palpable.

Bowling Green junior Mary Anne Fox and Nashville junior Gina Hatchett welcomed everyone to “Unified Worship Night” and prayed for the event before it began.

Justin Rivers, who premiered on Season 4 of the TV program “The Voice,” is a member of the Crossland Community Church band and took the stage after Fox and Hatchett to lead students in worship.

Voices filled the Colonnades as attendees, congregated on what used to be the WKU football field, joined their voices together and sang, “Let every heart adore! Let every soul awake! Almighty God of love, be welcomed in this place!” from the song “Here for You” by Matt Redman.

There was an intermission after about 35 minutes of worship in which campus minister Tommy Johnson with the Baptist Campus Ministry gave a message of unity and presented the gospel before the second segment of worship proceeded.

“It was a really powerful moment to see people from across the ministries coming together,” Alex Kennedy, a coordinator in Student Activities, said. Kennedy worked with members from various ministries and helped put everything together for the event.

Kennedy said students and ministers who spoke were intentional about not introducing which ministry they were with because individual ministries were not what the night was about.

Instead, she said, the power and love of Christ would reach across individual ministries to allow attendees to celebrate Christ’s life and teachings together as a unified group.

“It was beautiful,” Minneapolis junior Wesley Slaughter said. “The joy from seeing fellow believers worship and unify together was indescribable.”

Slaughter and Jones are excited for another event like this to happen next semester.

Jones said the ministries’ collaboration was an incredible opportunity for attendees to make Jesus known to the campus since a large gathering out in the open is less feasible through just one campus ministry.

“One, that their love for Jesus increased and that they gained a better understanding of his love for them. Two, that they got a picture of what heaven will be like when denominations aren’t mentioned and only the name of Jesus is exalted. And three, that both students and ministers caught a vision of what this could grow into as we keep planning events,” he said.