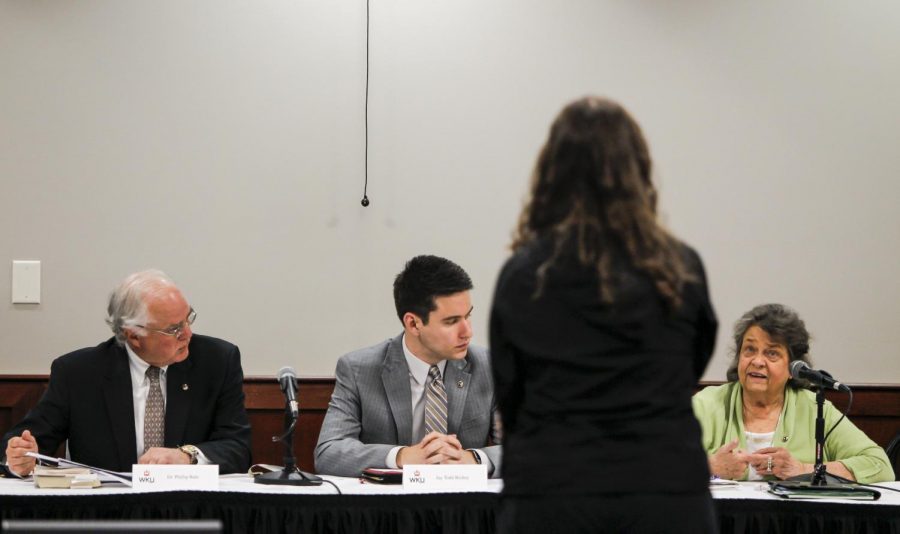 Frederick Higdon, left, Jay Richey, middle, and Dr. Barbra Burch, right, answer sophomore, Murphy Burke's question during the Student Forum held by the Presidential Search Committee Members on the top floor of Downing Student Union on Wednesday, April 27, 2016 in Bowling Green, Kentucky. "We have been holding a number of forums around campus, one for faculty and one for staff. This one is for students and we are trying to get their input on what qualifications, skills, and background the students would like to see in the next President of WKU. This is an opportunity for them to speak directly to the members of the Search Committee and some members of the Board of Regents," said Dr. Tamela Smith, Staff Regent. Ebony Cox/HERALD

The Presidential Search Committee hosted a student forum on Wednesday afternoon to get feedback from students about what they are looking for in the next university president.

Students met with members of the committee in Downing Student Union and were asked to answer the following questions: “What do you want to see in the next university president? What skills and experiences should they have? What vision should they bring to WKU?”

Phillip Bale, committee chairman, opened the meeting, which was broadcast live to WKU’s regional campuses. Bale emphasized the importance of the search.

“All of us on the search committee, and in fact all of us on the Board of Regents, recognize that the task we have been given is probably the most important task that any of us will have in any of our individual lives outside of family matters,” Bale said. “It certainly will be the most important task that we fulfill as members of the search committee and members of the Board of Regents.”

SGA president and student regent Jay Todd Richey read SGA Resolution 2-16-S, which outlines the qualities that SGA felt were important for the next university president. Included in that resolution is a commitment to academics, a commitment to providing resources to marginalized students, and promotion of diversity at WKU. The resolution also includes clauses about the treatment of the Jonesville community and promotion of “a scholastic political community.”

“That is the official resolution that we passed outlining what we believe is best for the university moving forward,” Richey said.

Students were able to ask the committee questions and give feedback about what they are looking for in the next university president.

Cyrus Sadrinia, Somerset senior, talked about WKU’s growth and continuing vision as being important for the next president.

“I hope we find someone who has the leadership and the vision just the same that Dr. Ransdell has,” Sadrinia said. “I hope someone doesn’t come in and try to just change everything up and change what our priorities are. I hope we maintain the goal that we’ve been going at because the direction that we’ve been going in is just phenomenal.”

Brandyn Atherton, Owensboro junior, brought up concerns about budgeting and campus expansions. He said he agreed with all of the resolution but had other issues he wanted to bring to the committee’s attention.

“I think that renovation is also a big thing,” Atherton said. “Instead of just expansion and building new buildings more, we need to build better.”

Atherton also brought up the need for more abundant and cleaner modes of transportation on campus and better use of space in buildings on campus.

Taylor Stewart, Danville sophomore, spoke of her involvement in Bible studies on campus. She emphasized the importance of keeping religious freedom on campus.

“A current trend that’s expanding across the country is the ban of Bible studies on university property,” Stewart said. “Many students across the country are not allowed the luxury that we are here. As an informed and concerned student, I request that the 10th president of Western Kentucky University continue the religious freedom that Dr. Ransdell has put in place.”

Other topics brought up were a continuing focus on sustainability, valuing a liberal arts education and providing resources that would help struggling students.

Bale concluded the forum by thanking the students for coming and telling them their input would be seriously considered by the committee. Bale said that although this was the smallest attended forum, it was the most interactive one to date.

“We take students at this university, which is the lifeblood of it, very seriously,” Bale said.