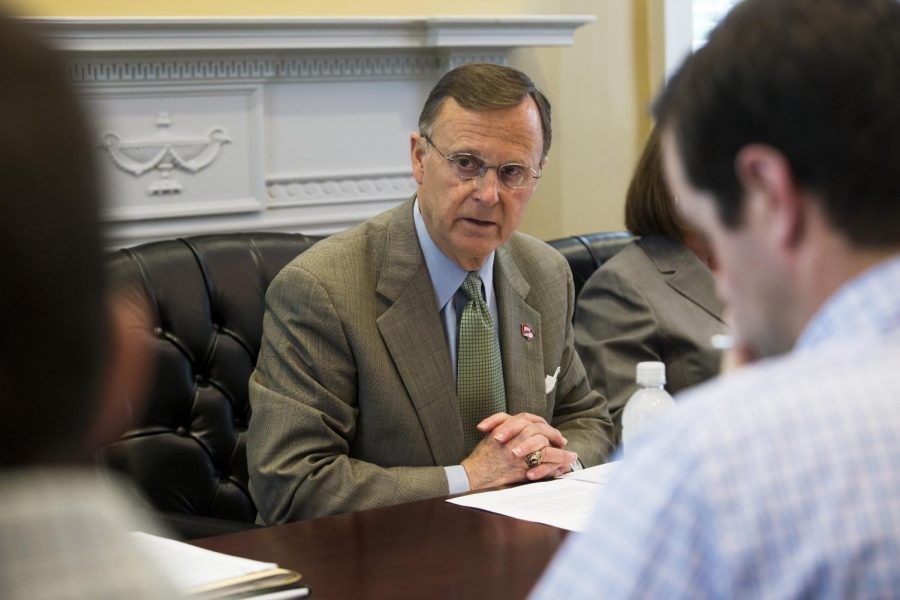 President Gary Ransdell and other university administrators address members of the media on Wednesday, April 27 regarding more than $6 million in budget cuts the university will make over the next year. The cuts will come in several forms, including the of shifting some expenditures from permanent to one-time funding, program reduction, elimination of empty faculty positions and transferring WKU building and ground services employees to a private contract with Sodexo. Brandon Carter/HERALD

WKU announced its budget reduction plan for the 2017 fiscal year on Wednesday afternoon.

WKU will have to reduce the budget by $6,039,200 for that year, according to the Fiscal Year 2017 budget. There will be a 4.5 percent tuition increase at WKU, pending approval by the Council on Postsecondary Education, generating approximately $8.3 million. The tuition increase will go toward paying for a 3 percent salary increase over the next 12 months for all full-time employees, according to an email from President Gary Ransdell.

There will also be an allocated surcharge increase, adding up to approximately $600,000, to the central budget for online courses.

However, areas of WKU will still see losses and cuts. For example, administrative reorganization will occur in an effort to combat losses.

The Alive Center and the Institute for Citizenship and Social Responsibility will be consolidated, saving $151,000, according to the 2016-17 budget reduction plan.

Des Moines, Iowa, sophomore Murphy Burke works in the ICSR office. She spoke of the changes to the office and of ICSR’s importance to her.

“I think social justice is important because being a just servant of the world is essential to me,” Burke said. “Being socially just is essential for every student.”

Ransdell spoke specifically of the consolidation of ICSR and the Alive Center at the media briefing.

The Offices of Diversity and Inclusion and Enrollment Management also face administrative reorganization, the extent of which is unclear at this time.

Among other programs, Gatton Academy, transit services, and six track and field programs also face reductions. The academy will face 4.5 percent cuts totaling $221,700. Program reductions will cut $513,700 from the budget.

Ransdell spoke of the process that he said began in January when potential budget cuts were announced.

“We began the process with our vice presidents and deans to propose areas within their respective divisions and colleges and units that were important but maybe not essential, and I know that’s a delicate line of thought,” Ransdell said.

He said that from there, they shortened the list and eliminated programs and units that were nonessential.

There will also be several shifts in funding from permanent to one-time or other sources that will result in cuts of $2.3 million for several programs. These programs include Honors Development Grants and Honors Travel Abroad Grants, faculty computer replacement and the transitional retirement program. One-time funding means programs will be funded by outside sources rather than the university budget.

Another change will be transferring Building Services and groundskeeping employees to a private contract with Sodexo. According to the budget reduction plan, this will cut $745,000.

“All impacted employees will receive an hourly pay increase, health benefits, vacation, and sick leave from Sodexo, and no one will lose his or her job as a result of this action,” Ransdell said in an email.

A campus forum with the Administrative Council and the department of human resources is planned for Thursday at 2:30 p.m. in the Downing Student Union auditorium to discuss additional questions and concerns.

“Budget cutting is a painful and difficult process, and unfortunately, we have been faced with this nearly every year for the last decade,” Ransdell said in an email to faculty and staff. “I know the campus is weary, as am I, of budget cutting. Our priority has always been to protect people, preserve academic quality, and maintain student services, and that continues to be my goal.”