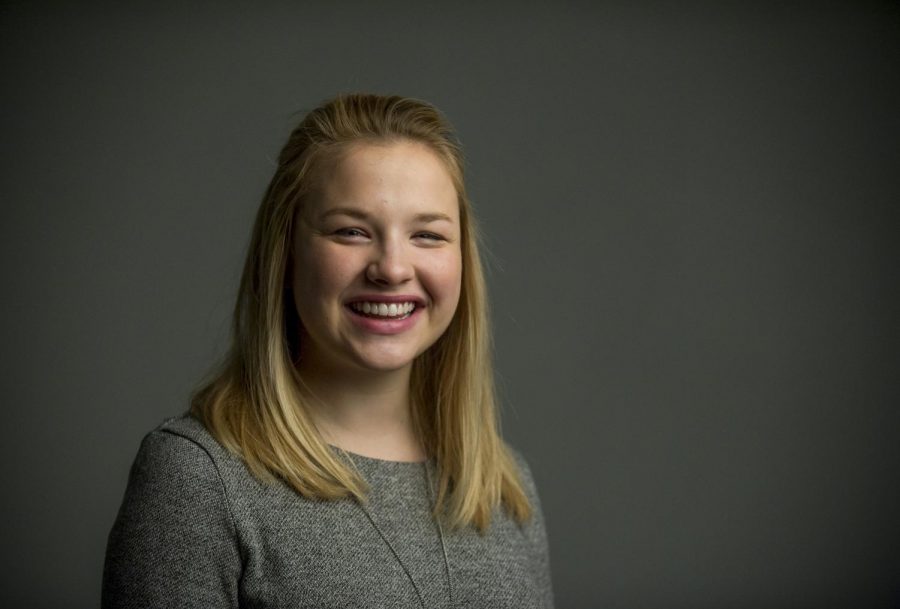 Louisville senior Megan Laffoon presented research on the effects of human land use on karst landscapes at Jinan University in China funded by the WKU FUSE grant. JUSTIN GILLILAND/HERALD

Frequent flyer miles aren’t a stranger to Louisville senior Megan Laffoon, who has been to China four times and concluded her latest visit on April 3.

“I didn’t just wake up and say, ‘Hey, this is something I want to research,’” Laffoon said.

Laffoon had the help of two professors on campus: Albert Meier, biology professor, who had been her adviser, and Chris Groves, the director of the Hoffman Environmental Research Institute.

Meier learned about Laffoon’s interest in China and desire to do research from a teaching assistant.

“I was well aware of [Grove’s] interest in China, and he had done some work with karst, so I decided to get [Grove and Laffoon] connected,” Meier said.

Groves believes this was just an example of how colleagues work with each other.

“We all collaborated and exchanged ideas,” Groves said. “We were all meeting in the middle.”

Though karst rocky desertification was the main premise of the research, Laffoon wanted to do more than simply explain it; she also wanted to try to find a solution.

Her idea for a solution came at the perfect time, according to Meier.

“A friend of my wife asked if we wanted to come over and plant clovers. Sounded boring, but I obliged,” Meier said.

What Meier’s friend was actually making were hugelkulture mounds. A hugelkulture is a pile of logs buried under a soil mound that produces better soil, food and water, according to Laffoon. Meier thought that this could be a possible solution for Laffoon to consider.

Karst rocky desertification is severe in areas like southwestern China, according to Laffoon. The drying and depleting effects this process can have on an area made Laffoon eager to research hugelkulture mounds and their potential benefits.

Meier said Laffoon can be described as someone who truly cares about outcomes that impact other people.

“She is interested in making things work and finding solutions,” Meier said.

Laffoon presented her research in China at Jinan University, Guangdong province. She was funded through the WKU FUSE grant.

The conference was based on research for hydrogeology and was comprised of a select group of specialists who were all working on environmental projects, according to Groves. Groves was invited to be the keynote speaker for the event.

Laffoon has been abroad before but said she was nervous to present in front of so many specialists.

“I was very nervous, but the audience was receptive and asked good questions,” Laffoon said.

The language barrier wasn’t a problem for Laffoon, who is also a part of the Chinese Flagship Program.

It was a surprise to many of the researchers that Laffoon was an undergraduate student.

“People came up to me after her presentation and asked, ‘Was she a Ph.D. student?’” Groves said. “They all spoke highly of the ability at which she was operating.”

“What young woman — undergrad — do you know that has sustained influence on the international scene?” Meier asked. “She being invited to come speaks volumes.”

Laffoon hopes to continue her research on solutions for karst rocky desertification and is thankful for the help she has received so far.

Groves said Laffoon’s involvement shows how different disciplines can come together to produce something great.

“She’s in the flagship program, honors and biology,” Groves said. “This just shows wonderful synergy of Western programs working together.”

Laffoon said she was just happy to have this opportunity to conduct and present research.

“I was able to speak with some of the top researchers on next steps to take, and that’s awesome in itself,” Laffoon said.