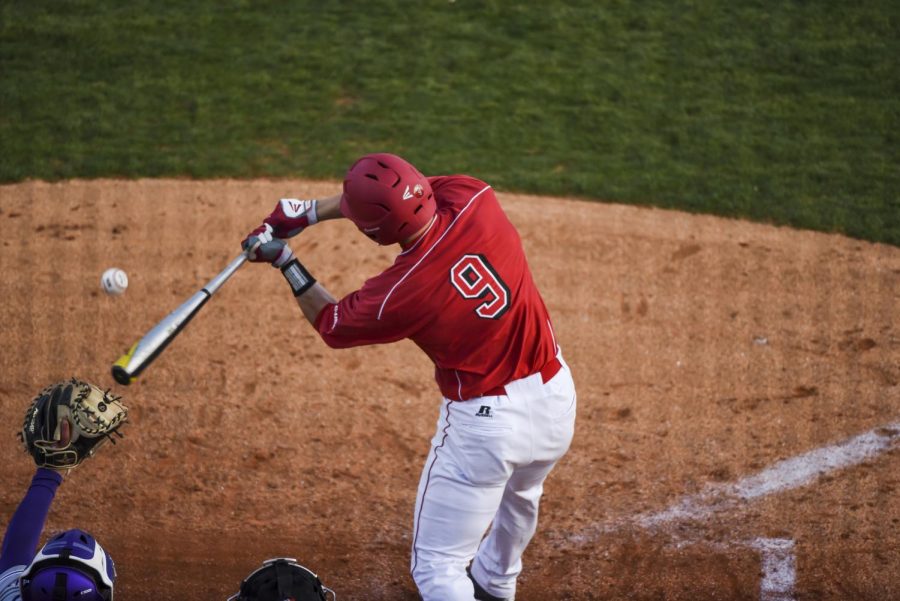 Mount Washington junior Hunter Wood swings at a pitch in a game against the Evansville acorns at Nick Denes Field on Tuesday April 5. 2016. The Hilltoppers won the game with a score of 6-5 ending the game early in the middle of the 9th inning. Lex Selig/HERALD

The WKU baseball team traveled to Houston last weekend to take on the nationally ranked Rice University Owls in a three-game Conference USA series during Friday and Saturday.

In the opening game, senior infielder Danny Hudzina took no time getting the Toppers the opening run of the series as the Conference USA’s leader in hits roped a double down the left field line to score redshirt junior outfielder Zach Janes.

After the opening run, senior pitcher Austin King and Rice’s Jon Dubplantier went back and forth from the mound. The two pitchers didn’t allow another run until the bottom of the sixth inning, when the Owls caught fire.

With two outs in the bottom of the fifth, Rice’s Dane Myers singled down the third base line to score Connor Tekyl to tie the game.

Two batters later, Dominic DiCaprio singled to right field to bring home Ryan Chandler and Tristan Gray to make the score 3-1. Finally, with the bases loaded, Dayne Wunderlich hit a grand slam to extend the lead to 7-1 before the Toppers got the final out to end the fifth inning.

“That inning just blew up on us,” Head Coach John Pawlowski said about the seven-run fifth inning in a post-game interview. “I felt bad for Austin because he pitched extremely well up until that fifth inning. I thought he was on his route to having his best pitch count of the year. One big mistake at the mound changed the whole complexion of the game.”

After the Toppers went down 1-2-3 in the top of the sixth inning, the Owls struck again. Chandler hit an RBI double to left centerfield to score Lewis to extend the Rice lead to 8-1.

The Toppers found some momentum at the plate in the seventh as sophomore infielder Steven Kraft hit down the right side to score redshirt junior infielder Leiff Clarkson.

The Owls added one more run and the Toppers only got one hit in the final two innings; Rice won the opening game by a final score of 9-3.

In game two on Saturday, Hudzina brought in the game’s opening run again. The Palm City, Florida, native doubled to left center to bring home Kraft to give the Toppers an early 1-0 lead.

The Owls answered in the bottom of the third. Gray singled through the right side to score Ford Proctor to cut the lead to one. Gray tried to steal second but was tagged out. However, Myers scored on the play to tie the game after three innings.

The Owls pulled away in the left inning as DiCaprio singled to left center to score Myers to give the Owls the lead. Hunter Kopycinski followed up with an RBI single to score Gray.

Junior pitcher Sam Higgs threw a wild pitch that allowed Wunderlich to come home to cap off a three-run inning, which gave the Owls a 5-2 lead after six innings. Blake Fox and Glenn Otto allowed only one more Topper hit the rest of the game, and the Owls won by a final score of 5-2 to clinch the series.

In the series finale, the Toppers once again brought home the opening run. Janes grounded out but scored Kraft to give the Toppers a 1-0 lead after the first inning.

The Owls answered in the bottom of the third as Lewis grounded out to third base, but he scored Andrew Dunlap to tie the game. After the Toppers couldn’t bring anything across in the top of the fourth, the Owls struck again.

A Topper error allowed Proctor to come home and give the Owls the lead. Soon after, Dunlap singled to left field to score Wunderlich and make the score 3-1 after four innings.

Needing a big play, Hudzina delivered again in the top of the fifth inning. He doubled to left field to bring home Janes, cutting the Owls’ lead to one.

It wasn’t until the top of the seventh when the Toppers threatened again. However, with men on second and third base with only one out, the Owls made a huge double play to get out of the inning and maintain a 3-2 lead.

Otto struck out two straight Toppers to get out of the inning, and Rice held on to its 3-2 victory to complete the sweep.

Next, WKU hosts Belmont University Tuesday at 6 p.m. at Nick Denes Field. Earlier this year, the Hilltoppers defeated the Bruins 10-4 in Nashville.