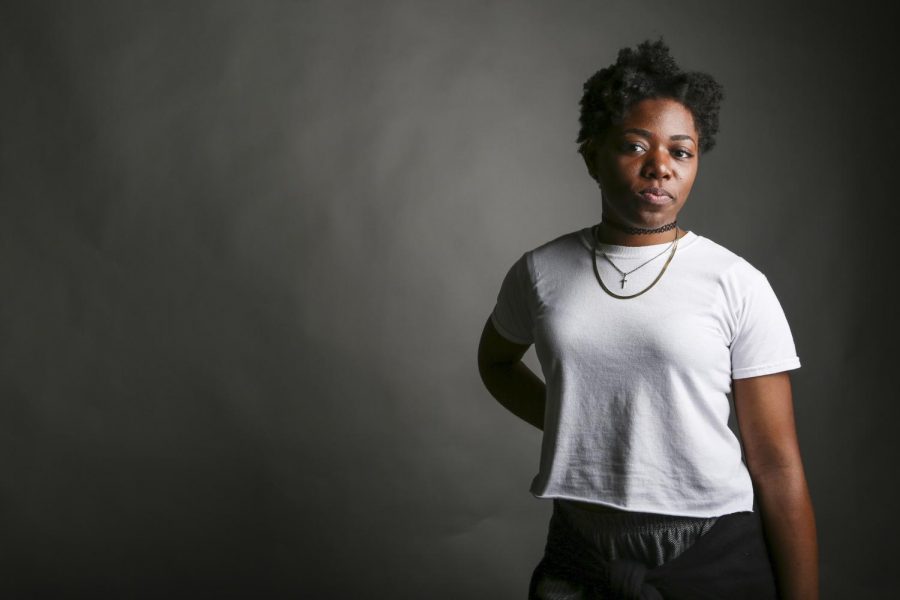 Freshman Tiye Gardner, from Louisville, Ky., started designing clothes in high school after a knee injury benched her from running track. Gardner is now working on her upcoming fashion show which is in two weeks. Although she has mostly designed dresses in the past, this show will showcase her passion for androgynous clothing. Gardner explained that androgynous style is not as popular in Kentucky so she wants to be able to provide that to people who want it. "My imagination and creativity for clothing is really different so I want to be able to make clothing for people with that same mindset as me," Gardner said. Brook Joyner/HERALD

As a freshman at WKU, Tiye Gardner has already found what many people spend most of their lives searching for — a way to combine her passion with a useful cause.

Gardner took up fashion design two years ago after a knee surgery forced her to give up running, and she used this interest to raise awareness for social issues that were important to her.

Gardner’s mom introduced her to a designer in Indiana, and the designer eventually put a few of Gardner’s designs in one of her shows.

“I thought that was really cool, so I started playing around with my grandma’s sewing machine and learning how to sew clothes,” Gardner said.

The summer after her surgery, Gardner organized her own fashion show in Louisville, her hometown, to raise awareness of bullying, an issue she said was especially close to her at the time.

“I had a friend who was bullied, and I asked her to come and tell her story and what she had to go through,” Gardner said.

Gardner said she wanted to use the show to encourage people to take action against bullying, inspiring change in her own city.

The following year, Gardner put on a second show centered around the Black Lives Matter movement.

“That was something important to me as well,” Gardner said, explaining that she has encountered racism during her life and knows how serious it is.

“What happened to me is real,” she said. “I wanted to bring that to the community.”

Gardner said she knew a student from DuPont Manual High School who had been working with the Jefferson County Public School Board of Education to make African-American history mandatory in all history classes, so Gardner invited her to speak at the show.

Gardener asked her to write a poem about what Black Lives Matters meant to her; the student then read this poem to the audience at Gardener’s event.

Nicholasville freshman Danielle Mullins modeled in the Black Lives Matters show and said she thought Gardner did well with incorporating the movement into her fashion event.

“Instead of having us all walk out and saying the money for this is going to support it, she had people talking about their experiences with it,” Mullins said.

Gardner is majoring in Spanish and minoring in communications and fashion design, and she hopes to incorporate all three of these areas in a career after graduation. She described a bilingual entertainment company that reports on fashion and said she envisions doing something similar in the future.

In high school, Gardner was a member of the Muhammad Ali Center Council of Students, an organization she said focuses on Ali’s six core principles: respect, confidence, conviction, dedication, spirituality and giving.

Through leadership and volunteerism within the program, Gardner said, she worked with social issues important to her. She also learned how to implement community-wide events that help fight these issues, and this experience gave her ideas for how to organize her fashion shows.

Mullins said having events like Gardner’s shows are a great way to raise awareness.

“In smaller towns, there’s not really much that goes on out of the ordinary,” Mullins said. “I think if something like this was to happen here, everybody would want to go just because it’s something different.”

“I know a lot of people don’t like going to forums or meetings, so I decided to create a fun community event and meet people where they’re at but also get my message across,” Gardner explained.