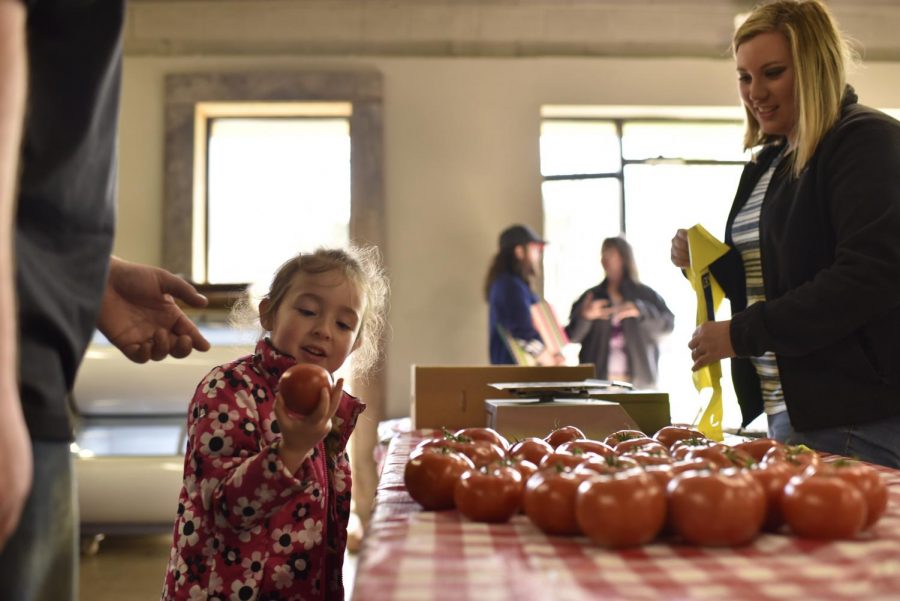 The smell of coffee brewed by the Alvaton Coffee Company filled the air, mixing with aromas of fresh greens and flowers.

The Community Farmers Market hosted its annual Spring Opening Saturday, marking the beginning of its market year and peak season. New vendors were welcomed, veteran vendors brought in more products and several vendors moved their booths outside to utilize more space and enjoy the spring weather.

“We were here all winter, but the Spring Opening is a good reminder that we’re still here, now bringing in the spring produce, and we’ve got plenty of stuff for everyone to buy,” Nikki Gray, the outreach coordinator for the market, said.

Among the many vendors was Joleen Stone, one of the Community Farmers Market originals. Stone grows plants, flowers and organically grown blueberries and blackberries.

“It’s been a very good crowd today,” Stone said. “I think everybody is happy to see some sunshine on a Saturday.”

Stone and her husband have seen much success during their years with the market. They began selling at another market but saw this location as a great opportunity and eventually were one of about seven families who took a deep breath and separated from the other market. That’s how the Community Farmers Market came about, she said.

“We’re in a part of town that’s growing with a lot of young people and new families in the area,” Stone said, “so we’re seeing people that have never been in a farmers market before and get a lot of students from campus as well. It’s just fun.”

All vendors at the Community Farmers Market grow their own produce, raise their own meats and make their own handcrafts. You don’t necessarily have to be from Kentucky, but you do have to produce what you sell, Stone remarked.

The market also welcomed Carriage House Vineyards to its vendor family on Saturday. Lisa Davis and her husband Don Davis have owned the Auburn vineyard, which also became a winery in September 2015, since 2011.

“With it being our first day, we didn’t know what to expect,” Lisa Davis said, “but it’s been a good day and a lot of fun.”

Carriage House held tastings and showcased two different finishes on its Chambourcin, a Cayuga white, as well as a cranberry apple wine at the market. Carriage House also plans to open a tasting area in Auburn in the late summer or early fall of 2016 and will continue to be at the Community Farmers Market every Tuesday and Saturday for the next year.

Lawrenceburg junior Alexis Corbin was excited to attend the Spring Opening on Saturday. Corbin is an intern with a nonprofit organization called TopCrops, a community garden for special needs adults in Bowling Green, and sells their products at the Community Farmers Market.

“Just seeing some of the vendors who come out in the spring who are out back but go away when it gets cold … it’s like seeing your grandma at the end of the year,” Corbin said.

Corbin discussed her experience working with the various vendors and described how each one tries to know everyone’s name. Vendors help each other and innovate new ways to improve the community, Corbin said.

“We have work days, and all the vendors come to the market and try to think of new ways to make Bowling Green not only a cooler community but also a community that grows closer together,” Corbin said.

The Community Farmers Market is open Tuesdays from 2 p.m. until 6 p.m. and Saturdays from 8 a.m. until 1 p.m.