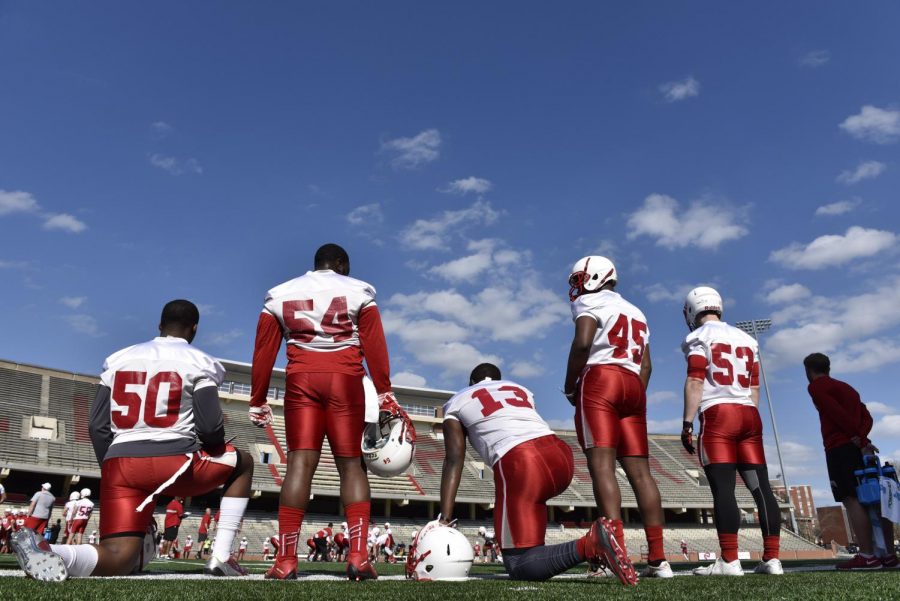 WKU kicked off its spring season this week with practices in the L. T. Smith Stadium in Bowling Green, KY. Practices will feature the action of 11 returning starters from last year's conference championship and bowl game-winning team, and will be open to the public on Mondays, Wednesdays, and Fridays from 4p.m.-6p.m. Gabriel Scarlett/HERALD

When spring practice began on the Hill on March 21, there were plenty of storylines to follow — a wide-open quarterback race, a loaded backfield, flashy athletes on the perimeter, a few new coaches and an intriguing defensive unit.

But one storyline that has received little attention is the offensive line. The Hilltoppers return all five starters from a season ago and will be relied on heavily for Head Coach Jeff Brohm’s offense to remain at a high level.

“I think the line’s done really well. Coach Brohm gave us the compliments during the scrimmage,” rising redshirt senior left tackle Forrest Lamp said. “We all came back from last year — we have about eight guys who’ve played together before. We’ve all molded together well for the past couple years and we know what we’re doing.”

The one staple amongst the offensive line from a year ago that will not be returning next season is offensive line coach Neil Callaway. Callaway will be joining former offensive coordinator Tyson Helton at USC to the same position.

Brohm replaced Callaway with Dale Williams who worked with Brohm in 2009 at FAU. Williams has worked as head and assistant coach at Lake Worth High School and Olympic Heights High since 2012.

The main focus of this year’s offensive line in spring practice has been to get the younger linemen in shape and build them up to the standard that Callaway did.

Many of the younger guys have been improving like redshirt freshman Miles Pate, redshirt junior Jimmie Simms and redshirt sophomore Scott Liebert.

“Coach Brohm talks about it every day; we have a veteran o-line,” Ray said. “We’re just helping to get the younger guys in the playbooks and perfecting their crafts and techniques.”

Last season’s unit was dependable, but this season’s line is expected to be improved and it will need to be.

The big men struggled a bit in battles with SEC foes Vanderbilt and LSU, and expectedly so, but the toughest task comes when WKU travels to Tuscaloosa in the fall to take on arguably the best defensive line in the country in the University of Alabama.

Former quarterback Brandon Doughty is arguably the reason that the offensive line is so crucial to this offense’s success.

His departure has left a huge void in offensive production, and the linemen will be influential in keeping the rhythm going.

With the quarterback situation likely to remain a question until around opening weekend, the linemen are working to build good chemistry with the men they are obligated to protect.

“I don’t get to watch [the quarterbacks] much, but they’ve been doing well as far as the leadership stuff goes,” Lamp said. “They’re getting more comfortable. Obviously Brandon [Doughty] was here for two or three years and it’s hard for those guys to step in and be as good of a leader as he was, but they’re coming along and being vocal. They’re doing well.”