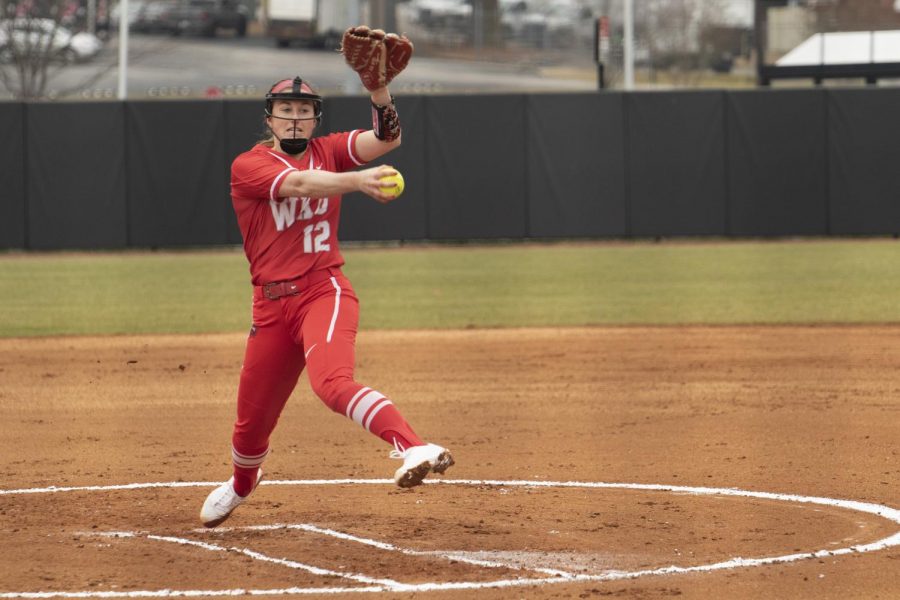 WKU pitcher Kelsey Aikey (12) throws out a strike against Indiana state university on Feb 27, 2021 at the WKU softball field. The Hilltoppers defeated the sycamore 6-0 in the Hilltopper Classic to get their first at home victory.

WKU Softball (15-6) suffered a 5-2 loss to No. 5 Florida (30-4) in the two program’s first ever meeting and lost an exhibition game 5-0 against Softball Canada in the team’s first day of play down in Gainesville, Florida.

“I thought we competed well today against one of the best teams in the country,” head coach Amy Tudor said in a release.

In their last three non-exhibition games the Hilltoppers have scored four runs and were shut out by Eastern Kentucky University back on April 7. WKU as a whole has batted .198 over that span.

“Being able to play against Team Canada was an awesome opportunity for our program and we are grateful for that opportunity,” Tudor said. “It was great to see [Larissa] Franklin and for the team to see one of our former all-time greats.”

Aikey was able to pick up two strikeouts to push her career total to 524.

The Hilltoppers would put a run on the board in the top of the third thanks to redshirt senior Paige Carter’s seventh home run of the year. The score would stay at 3-1 until the top of the sixth inning when another solo home run, this time from redshirt sophomore Kennedy Sullivan, cut the Gators’ lead to one. It was Sullivan’s sixth long ball of the year, the most she has hit in a season.

Florida would respond in the bottom of the sixth with a sacrifice fly and a triple to push its lead to 5-2, and WKU was unable to put together a rally in the top of the seventh to stay alive.

Shelby Nunn finished the game with a strikeout, allowing two runs on five hits with only two walks. She was able to keep Florida’s offense relatively quiet after its pair of home runs in the first but the Gators’ offense would prove to be too much for WKU.

Softball Canada came out on top in an exhibition matchup that featured former Hilltopper Larissa Franklin playing against her former coach Amy Tudor.

Franklin had played under Tudor at Indiana-Purdue University Fort Wayne from 2012-2013 and transferred to WKU in 2015 to play a full season on Tudor’s second Hilltopper squad.

The game began after a 90-minute delay due to a typical Florida thunderstorm.

Sullivan held Canada to two hits through three innings before being relieved by Kelsey Aikey in the beginning of the fourth inning.

Canada took a 3-0 lead in the top of the fifth due to a sacrifice fly and a two-run home run from former Hilltopper Larissa Franklin. Redshirt freshman Katie Gardner would relieve Aikey after the blast.

Canada would add to its lead in the top of the sixth due to a ground-out RBI, making it a 4-0 game. Shelby Nunn would relieve Katie Gardner in the seventh and struck out former Hilltopper Larissa Franklin.

Another run would score in the top of the seventh due to an RBI single, extending Canada’s lead to 5-0.

WKU would finally register a hit and end Canada’s bid for a combined perfect game thanks to a single from redshirt freshman Madeline Rider, just the second hit of her collegiate career, in the bottom of the seventh. But the Hilltoppers could not overcome Canada’s lead.

WKU will round out the road trip against Florida Gators on Sunday at 10 a.m. CT, the team’s last game before beginning Conference USA play with a four-game away series against Middle Tennessee on April 16-18.