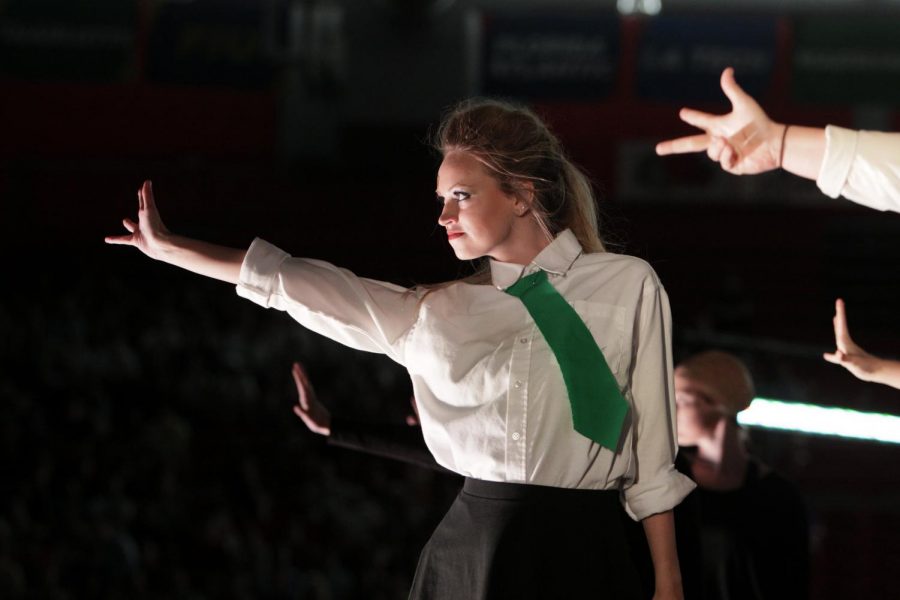 Jessie Houk, a freshman at WKU, danced during Greek week Spring Sing with her sorority Alpha Omicron Pi in their performance of Hogwarts. The girls choreographed and preformed the dance on stage in front of a huge crowd in E.A. Diddle Arena on April 17, 2016. Lex Selig/HERALD

This week launches one of the most competitive weeks of the year for the Greek community: Greek Week. The Spring Sing dance competition kicks off the start of the week’s activities.

“We started early. We started planning at the end of last semester and knew that if we were on top of it, we could make the day run smoothly,” Shelton said. “We knew about 3,500 people were going to attend, so we wanted to make it great, and that involved planning.”

Almost every Panhellenic sorority and fraternity took part in this event, including a performance by the Student Affairs staff and an exhibition by the non-Panhellenic fraternity Iota Phi Theta.

The theme this year was “Once Upon a Hill” with performances such as “Once Upon a Pop Queen” by the Delta Zeta sorority, “Lion King” by the Phi Gamma Delta fraternity, “Reign of Terror” by the Sigma Kappa sorority and “Snow White” by the Pi Kappa Alpha fraternity.

Chapters began practicing months in advance and had members from their chapters or others help them choreograph and coach the team.

“We had two girls in charge bouncing ideas off each other,” Ellie Smith, a Louisville junior who performed in “Reign of Terror,” said.

Louisville sophomore Travis Higdon, who performed with Sigma Phi Epsilon fraternity, said they prepared for about two months with practices occurring two and even three days a week for an hour to two hours.

Some students said Spring Sing can be an exhausting event, taking a toll both on performers and those planning the performances.

“The hardest part about Spring Sing is managing your homework and study time because the practices usually go pretty late,” Higdon said.

The winners of Spring Sing and the other Greek Week events will be announced at Convocation on Sunday. The rest of the week is filled with events to bring the Greek community together, including the Blood Drive, TUG, Events Day and Greek Feud.