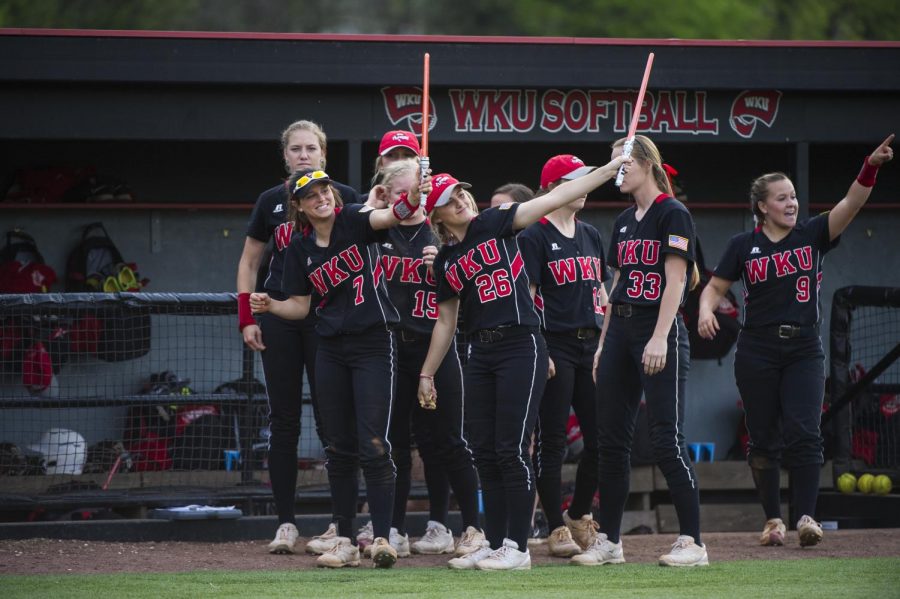 Freshmen infielders Rebekah Engelhardt (7) and Hannah Mabrey (26) point their lightsabers toward a teammate after WKU scored a run during a softball game against Tennessee Tech at the WKU Softball Complex in Bowling Green, Kentucky, on Wednesday, April 13, 2016. The Hilltoppers took down the Golden Eagles 5-3. Nick Wagner/HERALD

In a three-game series that took place this past weekend, the Lady Toppers softball team lost two of their three matches to the Charlotte 49ers.

On Friday, WKU traveled from Bowling Green to Charlotte, N.C. to play in the series. The first two games of the weekend took place on Saturday at the Philips Softball Complex.

The home advantage was obvious in these games, both of which Charlotte won. The third game was a turnaround for WKU as they swept Sunday with a 4-0 victory.

“We wanted to win the series and we didn’t do that, but I felt like we went out on a high note,” Head Coach Amy Tudor said.

Game one was won by the 49ers by a small margin with Charlotte scoring one run. The second game proved fatal for the Lady Toppers when Charlotte defeated them 11-3. WKU rallied in the third game on Sunday though to take the 49ers 4-0.

The driving force behind Saturday’s results was WKU errors. Another factor was Charlotte’s pitcher Lexi Betancourt who held the Lady Toppers to three hits with nine strikeouts during the first game.

Freshman utility player Bryce Holmgren, sophomore utility player Jordan Mauch and junior catcher Taylor Proctor were the three WKU batters to get a hit in the first game on Saturday.

Game two was a short five innings of play that resulted in a massive turnout for Charlotte’s offense and WKU’s first real offensive action of the series.

Charlotte recorded three unearned runs in the third inning due to more errors by WKU.

The Lady Toppers quickly tied the game in the top of the fifth inning with two RBI’s from senior infielder Brooke Holloway and one from sophomore infielder Carleigh Chaumont.

The fifth was where the last runs were scored as Charlotte came back in what a WKU press release described as “monumental fashion.” The 49ers notched eight runs on seven hits to bring the final score to 11-3.

The Lady Toppers had four hits during the second match led by Chaumont’s performance and Holmgren’s hitting. Tudor chalked the losses on day one up to poor fielding and a problematic hitting.

“I felt like our hitting got better each day, so I think that was a good thing to build upon,” Tudor said. “We had some mistakes that we don’t usually make in game two, which kind of hurt us.”

On Sunday, junior pitcher Kathryn Downing and freshman infielder Shelby Maggard both pitched two-hitters for WKU. The game was Maggard’s first two-hitter in her career history.

Holloway started off the scoring trend for WKU in the first with a hit to right field, which put the team ahead 2-0. Tudor specifically praised Downing and said she pitched well all weekend.

“Our consistency from her in the circle this past weekend was huge,” Tudor said.

It was two innings later at the top of the fourth when WKU was awarded a walk, which set the score at 3-0. Another error from Charlotte led to the final score of 4-0 when freshman infielder Rebekah Engelhardt made it home shortly after stealing second.

Despite Sunday’s win, WKU dropped the series and is currently at 16-21 overall and 7-8 in Conference USA. The team’s next game will be at 6 p.m. at the WKU Softball Complex on Wednesday against the University of Kentucky.