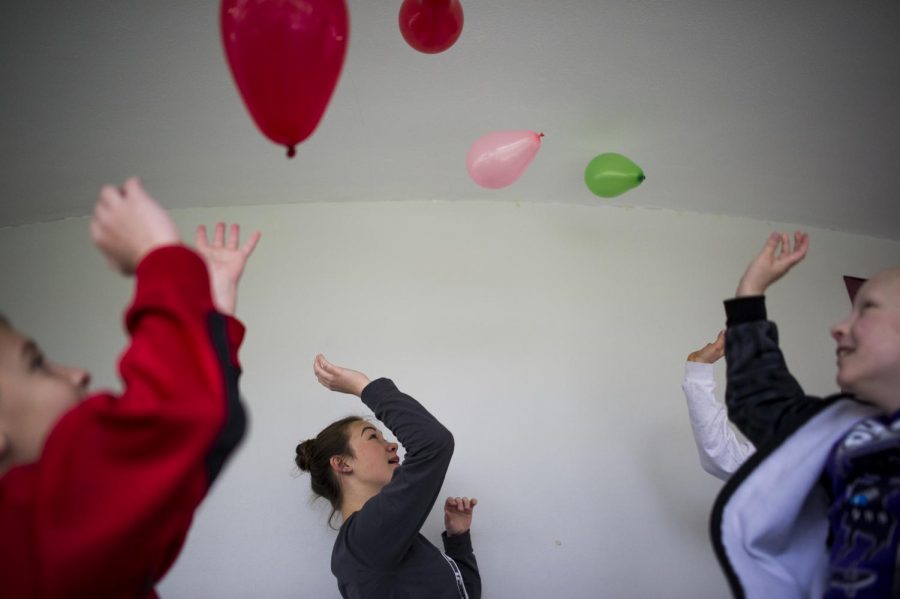 Science Curiosity Investigation campers Peyton West, 8, left, and Lukas Harrison, 9, right, play with balloons with Sara Rastoder, 17, middle, before the start of the day on Wednesday, April 6, 2016 at the Hardin Planetarium. Justin Gilliland/HERALD

Hardin Planetarium is hosting the Spring 2016 Science Curiosity Investigation Camp this week, bringing kids into the interactive world of science.

Planetarium coordinator Ronn Kistler said the goal of SCI Camp is to engage kids in informal science education both mentally and physically through various hands-on activities.

Kistler said one of the week’s activities involved bottle rockets and finding out what makes flying objects defy gravity.

“The idea isn’t just to shoot off bottle rockets but to explore them,” planetarium director and physics professor Richard Gelderman said.

The camp’s goal is to develop campers’ curiosity and encourage them to ask questions through the different interactive projects, Gelderman said.

camp’s activities this week to bring the arts into science education.

He said he planned an activity where campers will create and use basic rhythms to express certain qualities of celestial objects.

“The camp is oriented towards investigation,” Kistler said. “We’re not just going to be listening and watching, but we’re going to get involved and use that involvement to investigate answers to questions.”

Kistler said the camp started in 2013 to give elementary students on spring break an opportunity to get involved with science outside the classroom. Before the camp, Kistler said, there weren’t many activities going on in the community in the area of science.

“We wanted the kids to have somewhere fun to go, and where parents felt good about sending them,” Gelderman said.

“A lot of these kids already have a science passion, so this is just kind of a step to help guide them,” Phillips said.

Phillips said she has enjoyed seeing the kids interact with one another and learn ways to apply science to daily life.

Kistler said the students, ranging from third to sixth grade, still have high levels of curiosity, putting them at a good age to expand their minds through interacting with science.

“They love to get their hands involved and to get out and move,” Kistler said.

The planetarium offers free shows weekly to the public on Tuesday and Thursday nights at 7 p.m. and on Sundays at 2 p.m., which Kistler said is a part of the planetarium’s focus on informal science education: learning that occurs outside the classroom.

The planetarium offers a different learning atmosphere because audience members go by choice and can engage as much as they want to, Kistler said.

The camp also provides hands-on experience and active involvement. This is what separates it from many classrooms, where students might become jaded by lectures and worksheets.

“An incredibly important part of investigating is failing, then going back to do it again,” Gelderman said. He said he hopes the camp will encourage kids to be creative in science and teach them how to ask questions as well as find answers.