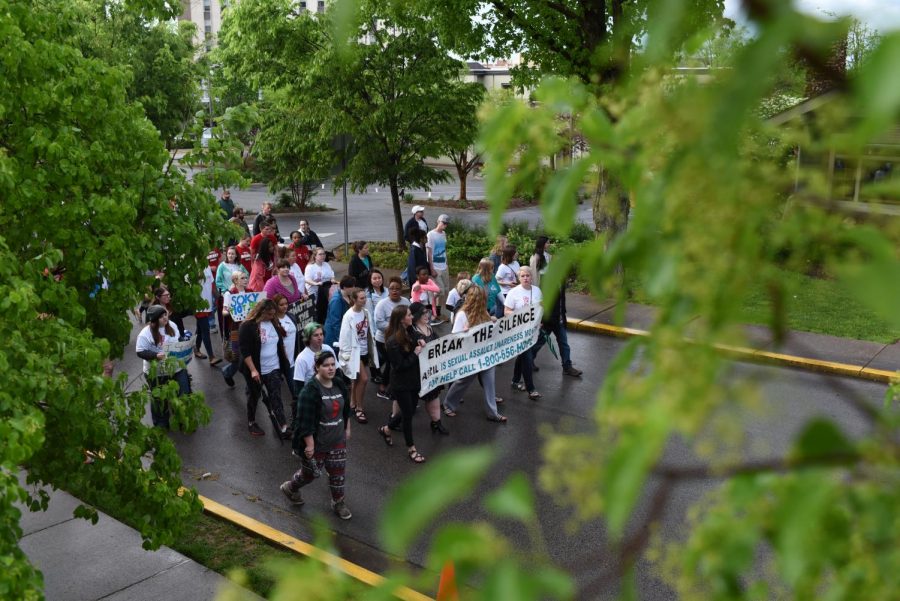 Members of the Bowling Green community march from the First Christian Church in solidarity with victims of sexual assault at the "Take Back The Night" event on April 21, 2016. "Speak out for others who don't have a voice," begged Abigail Raley, 17, who shared a poem about her experience with sexual assault with a packed room of supporters. Gabriel Scarlett/HERALD

Despite the chance of rain, WKU students and members of the Bowling Green community gathered together on Thursday night for Take Back the Night, an event held to show support for survivors of sexual violence.

The program, which was held at the First Christian Church, began with testimonies from survivors of sexual assault and rape.

Abigail Raley, a junior from Bowling Green High School, was one of the speakers.

While some in the audience held back tears, Raley performed a poem she had written about her experience as a survivor.

The message of her presentation was simple: do not be afraid to speak.

“A lot of times victims don’t want to speak about it or feel like they shouldn’t or are told that they shouldn’t because then people won’t believe them if they speak out about it,” Raley said. “I think that’s really stupid.”

When she finished, onlookers cheered and several of them wiped away tears.

Collin Higgins, a freshman from Owensboro who came with a group of ROTC members, was one audience member who was touched by Raley’s words.

He described her poem and the testimony from other survivors as “intense.”

After the speakers finished, Elizabeth Madariaga, sexual assault services coordinator, took the microphone to kick off the main event of the night: the march through downtown.

“Let’s take back the night, Bowling Green,” Madariaga said as the entire audience filed from the church to begin the walk down the streets.

Participants, who ranged from small children to elderly adults, carried signs or wore shirts designed for the event. They marched behind a police car from the Bowling Green Police Department.

Maelee Fleming, a junior from Smyrna, Tennessee, and a participant in the walk, said she believed Take Back the Night was beneficial for the university.

“I think it gets a lot of the word out about a topic that usually doesn’t have a lot of exposure,” Fleming said.

Raley said this silence is one of the reasons she became an advocate for survivors.

“Advocating for sexual assault victims is something that’s really, really, really important to me because silence is a big thing,” Raley said.

This silence and the factors that enforce it often prevent survivors from speaking out about their experiences. Raley said she would urge survivors to tell their stories anyway.

“Don’t be afraid to talk about it,” Raley said.

As participants returned to the church at the end of the walk, they were greeted with small white candles and instructed to stand in a circle.

After the candles had been lit, the entire group sang “This Little Light of Mine.” The song ended with a moment of silence to honor all survivors.

Raley said there was one main thing she would want to tell other survivors.