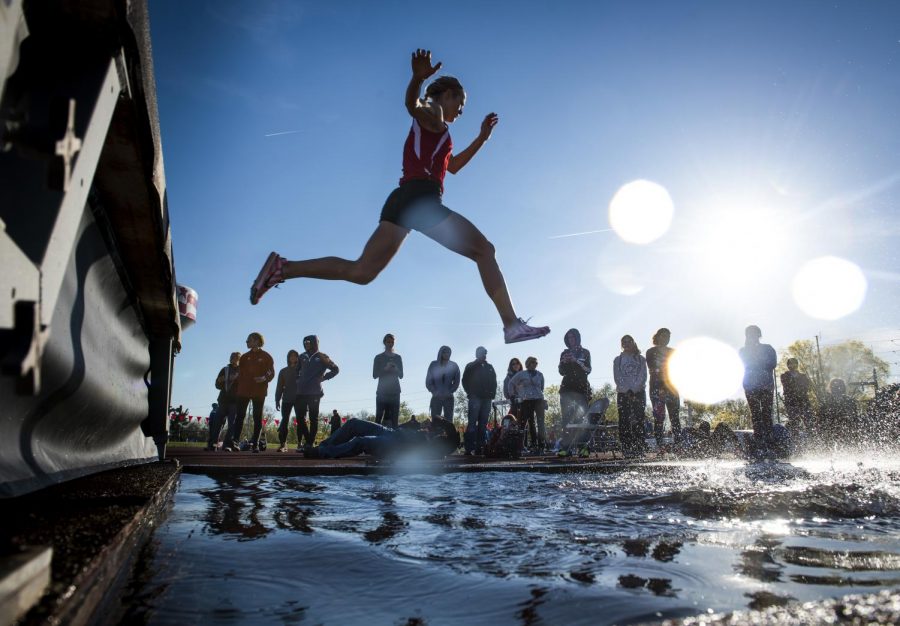 Runners fly high as they leap the water obstacle on the women's 3000m steeple chase at the Hilltopper Relays in Bowling Green, Ky. on April 9. They must complete eight laps of the track, overcoming multiple hurdles and the water trap like in some horse races. Miami University (Ohio) took the first place honors with a time of 10:52.68 by Alesha Vovk. Gabriel Scarlett/HERALD

The WKU track and field team could only host one meet at home this season, and it took advantage of that opportunity this past weekend.

The Hilltopper Relays, which began on Friday and concluded on Saturday, saw the host team win nine events en route to an overall solid performance.

“We had a very good turnout from an attendance standpoint,” Head Coach Erik Jenkins said. “As far as the team progression, it wasn’t a perfect meet, but it was a meet for us to go out and take care of some things. For the most part, we handled the weather well but we also saw quite a few things we really need to work on in order to be prepared for the Conference USA Championship and the NCAA’s.”

The Lady Toppers were most successful on the track as they claimed five first-place finishes. Junior sprinter Carrol Hardy and freshman sprinter Jadzia Beasley competed in the 100-meter dash, claiming the top two times of 11.76 and 11.78 seconds.

Hardy also finished second in the 200-meter dash, and senior sprinters Tashauna Yapchung and Shantol Hemley left their final mark in home events by collectively taking two of the top three spots in the 400-meter dash.

Senior sprinter Jessica Gelibert also made an impact in her final home event with a win in the 400-meter hurdles via a 59.04-second time. Gelibert also joined forces with Yapchung and sophomores Khadijah Valentine and Ariel Terrell in the 4×400 relay to win the event with a time of 3:43.96.

The Lady Toppers collected 11 total top-three finishes across all events.

On the men’s team, seniors Aaron Stevens and Vincent Wyatt closed out their home careers with top-two finishes in their respective events. Stevens claimed first place in the 3,000-meter steeple chase with a time of 9:29.78 and Wyatt’s 14-second time in the 110-meter hurdles earned him second in the event.

Sophomore sprinter Julius Morris captured a total of two events in the Hilltopper Relays. Morris turned in a season-best time of 10.54 seconds in the 100- meter race and finished first in the 200-meter race with a time of 21.11 seconds.

“I think Julius is a guy that can definitely compete at the top-tier level of C-USA which he’s shown, and I also think he’s a guy that is going to be able to compete at the NCAA Division One Championship levels both indoors and outdoors at some point,” Jenkins said. “We’re happy to have Julius here and we believe he’ll continue to improve in our program.”

Seged also shined in the 400-meter hurdles with a time of 53.03 seconds, good enough for third in the event.

Perhaps the most impressive finish of the day came from the 4×100-meter relay team consisting of Dasor, Morris and junior sprinters Kyrie King and Ventavious Sears that posted a time of 39.94 seconds.

The best field performance of the day came from sophomore Nick Demaline whose second-place in the shotput competition with a throw of 18.20 meters.

Up next for the WKU Track and Field Team are the Mt. SAC Relays in Norwalk, Calif., which begin on Thursday, April 14 and end on Saturday, April 16.

“The first thing we would hope to get is good weather,” Jenkins said. “Hopefully we can go out to Mt. SAC and have warm temperatures and be able to execute some of the things we need to improve upon.”