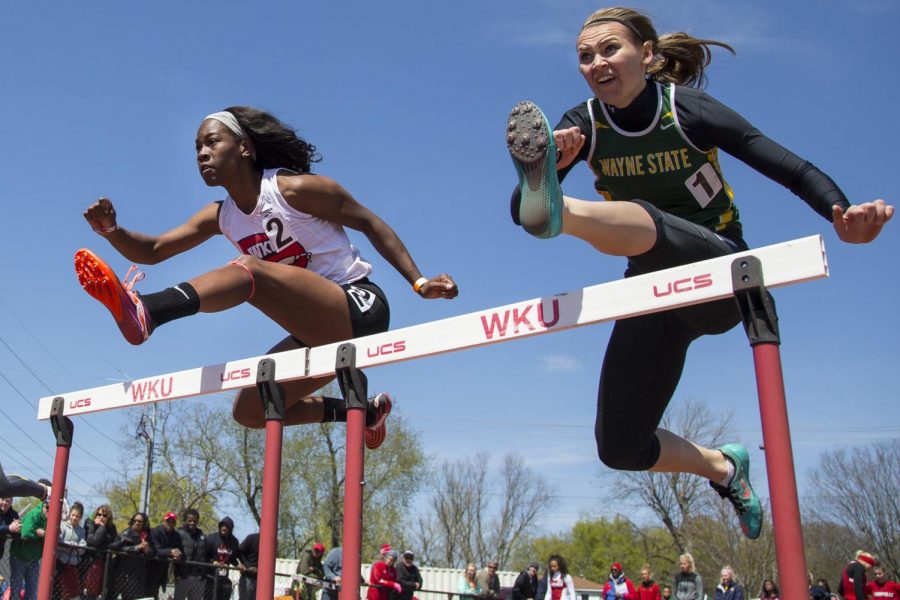 Senior Jessica Gelibert, left, leaps over a hurdle at the Hilltopper Relay Meet at Ruter Track and Field Complex on Saturday, April 9. Gelibert finished 11th in the women's 100-meter hurdles with a time of 14.52 seconds. WESTON KENNEY/HERALD

After hosting the Hilltopper Relays last weekend and turning in a solid performance in the Florida Relays a week earlier, the WKU track and field team will head to Norwalk, California for the Mt. SAC Relays.

The Mt. SAC Relays will run from Thursday through Saturday and Head Coach Erik Jenkins looks at the meet as a chance to take the next step and improve on the teams past two outings.

“The first thing we would hope to get is good weather,” Jenkins said. “When we were in Florida it was unseasonably cool for them as well and then obviously this weekend we had a lot of wind and cold temperatures. So hopefully we can go out to Mt. SAC and have warm temperatures and be able to execute some of the things we need to improve upon.”

WKU started the indoor season in Nashville at the Black and Gold Invitational on March 25 and 26. Both the men’s and women’s relay teams claimed first place in the 4×100 meter relays.

Sophomore Julius Morris teamed up with redshirt junior Corey Parks, junior Kyree King and senior Ja’Karyus Redwine in the event and won the event with a time of 41.66 seconds.

A week later, the Hilltoppers were pitted against some of the superior talent in the country at the University of Florida for the Pepsi Florida Relays.

Junior Ventavius Sears joined the trio of Morris, King and Redwine in the 4×100’s and placed 11 in the event with a time of 40.07 seconds, improved from the previous meet.

At the only home event of the outdoor season, success came most often for the Lady Toppers. The women claimed five first-place finishes during the two-day event.

Morris shined again in the Hilltopper Relays, capturing a total of two events as he turned in a season-best time of 10.54 seconds in the 100-meter race and finished first in the 200-meter race with a time of 21.11 seconds.

Jenkins was pleased with his team’s effort, but noted that his team still had a lot of improving to do.

“It wasn’t a perfect meet, but it was a meet for us to go out and take care of some things,” Jenkins said. “We also saw quite a few things we really need to work on in order to be prepared for the Conference USA Championship and the NCAA’s.”